Commentary — This will be the showdown. Most cities are dominated by Democrats who will do whatever they can to undermine Donald Trump. Even white liberals in urban areas have been so brainwashed that they have what can only be described as a deathwish to make sure that whites become a small and abused minority at the earliest possible date.

WASHINGTON (CBS) – A Massachusetts law enforcement official testifying before Congress on Tuesday called for leaders of sanctuary cities to be arrested.

Bristol County Sheriff Thomas Hodgson told the House Subcommittee on Illegal Immigration that sanctuary cities “have become magnets for illegal aliens, some of which have violent criminal records.”

“If these sanctuary cities are going to harbor and conceal criminal illegal aliens from ICE, which is in direct violation of Title 8 of the U.S. Code, federal arrest warrants should be issued for their elected officials,” Hodgson said. “Our citizens would be safer if we never stopped enforcing immigration law and if we never formed or turned a blind eye toward sanctuary cities.” 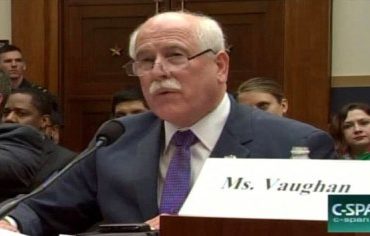 He also took aim at a Massachusetts legislator who passed along rumors of a planned ICE raid in Brockton on Tuesday and Wednesday.

Rep. Michelle DuBois, D-Brockton, warned her constituents in a Facebook post “if you are undocumented don’t go out on the street. If there is a knock on the door of your house and you don’t know who it is, don’t open the door.”

DuBois said the rumor of the ICE raid was wide-spread in Brockton. “Passing information along that is already all-over the community, not only lets the people I represent know what is happening, it lets ICE know that everyone in Brockton is aware of ICE’s planned raid (if there was one),” she said. “Having ICE know that this rumor is ramped allows them to change the date if they feel the public’s knowledge of the raid will bring them into danger.”

ICE said it does not release information regarding future operations and does not conduct random sweeps, checkpoints or raids.

“Any person who actively incites panic or fear of law enforcement is doing a disservice to the community, endangering public safety and the very people they claim to support and represent,” ICE spokesman Shawn Neudauer said.

Sheriff Hodgson said there is no bigger threat to public safety than illegal immigration. He said his correctional officers have become de facto ICE agents and are able to perform all immigration-related actions.

Hodgson drew criticism from civil rights groups earlier this year when he joined an ICE screening group to identify inmates who may have entered the country illegally. He also made an offer to President Donald Trump to have inmates help build the proposed Mexican border wall.

On Monday, Attorney General Jeff Sessions said sanctuary cities like Boston must end, and that those cities risk losing federal money. Democrats across the Commonwealth have pushed back and said they stand with sanctuary cities.