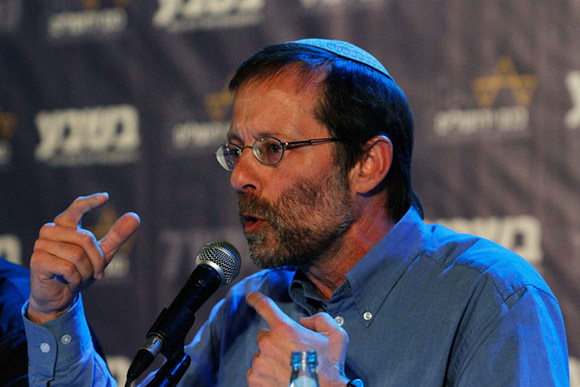 The first outrageously racist comment came from Israeli Knesset deputy speaker, Moshe Feiglin, Deputy Speaker of the Israeli Knesset and member of Prime Minister Benjamin Netanyahu’s ruling Likud Party who posted his message on his Facebook page this past weekend.

The post lays out a detailed plan for the destruction of Gaza—which includes shipping its residents across the world—in a letter which he addressed to Netanyahu.

Feiglin’s message, which received more than 8,000 likes on his page, lists four action points which he wants to be enforced as soon as possible. 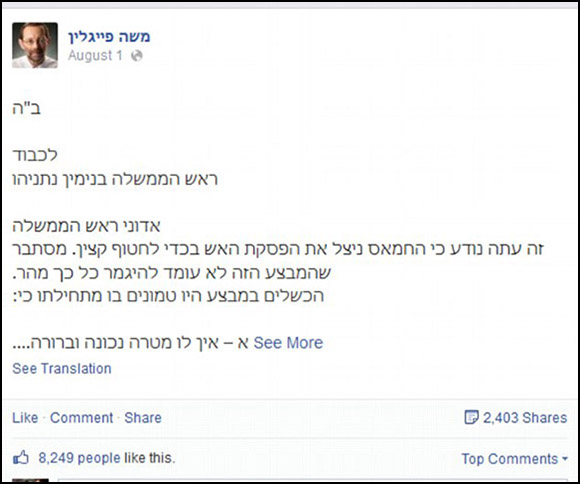 Feiglin details the first one as “defining the enemy” and states:

“The strategic enemy is extremist Arab Islam in all its varieties, from Iran to Gaza, which seeks to annihilate Israel in its entirety. The immediate enemy is Hamas. (Not the tunnels, not the rockets, but Hamas.)”

He says another important part of his plan is the “conquest of the entire Gaza Strip, and annihilation of all fighting forces and their supporters.”

Feiglin then details how he wants Israel to “turn Gaza into Jaffa, a flourishing Israeli city with a minimum number of hostile civilians.”

In 1948 Jaffa was a Palestinian town but there was an exodus of most of its Arab population when it fell to the fledgling Israeli army and Jewish militias.

He also then states that the Israeli Defense Force must “find areas on the Sinai border to establish tent encampments…until relevant emigration destinations are determined.”

In addition, “the supply of electricity and water to the Gaza would be disconnected before being shelled with maximum fire power.”

Feiglin explains how the IDF would then “exterminate nests of resistance, in the event that any should remain.”

Feiglin’s Facebook page is verifiable as it is linked from his official page on the Knesset website.

The second outburst of Jewish Supremacist hate came from Major-General Giora Eiland, a former head of Israel’s National Security Council. Writing in an op-ed piece in the Israeli YNet news service, Eiland announced that in Gaza there “is no such thing as innocent civilians.”

He states that Israel cannot hope to ultimately defeat Hamas without understanding that all Palestinians are the enemy:

“A state cannot defeat an efficient guerilla organization if the following three conditions exist: We and they are on two sides of a border; the organization enjoys the full protection of a state; their state or its citizens are not an accountable side. Whoever fails to understand that is entering a war without an ability to win” Eiland wrote.

“What would have been the right thing to do? We should have declared war against the state of Gaza (rather than against the Hamas organization), and in a war as in a war.

“The moment it begins, the right thing to do is to shut down the crossings, prevent the entry of any goods, including food, and definitely prevent the supply of gas and electricity.

“We are dealing with an enemy state, not with a terror organization which is seemingly operating from within an innocent civilian population.”

What Eiland is actually saying here is that ALL the Gazans need to be treated as enemies, with no exception.

Both these outbursts from senior Israelis, as hate-filled and genocidal as they are, have passed completely without comment from any western politician or news source—precisely because the Jewish lobby in the west tightly controls the press and political institutions of those nations.

Anyone who doubts this need only contrast the Jewish Supremacist-controlled mass media’s repeated coverage of an alleged comment by an Iranian ex-president on Israel’s future existence.

That comment, even though thoroughly exposed as an outright lie, was, and still is, endlessly repeated by the mass media.

However, genuine comments about “concentration camps,” “extermination” and “no innocent civilians” made by leading Jews, are ignored by the same mass media.

Bear in mind that Feiglin is a senior Israeli government figure–equivalent to the deputy speaker of the House of Representatives in America. Imagine if a senior American government figure of that stature had called for any group–Jews in particular–to be put into concentration camps? The outrage would be never-ending…

It is the standard hypocrisy—one rule for Jews, and another for the hated Goiym.

Next Post Hear Dr. David Duke on the Genocidal Evil of the Zionist Murderers