The only “evidence” which the US government has upon which it is basing its claim that the Syrian government used chemical weapons is an “Israeli intercept” of a phone call, it has emerged.

At the same time, US State Department spokeswoman Marie Harf has admitted that the government has “no idea” who carried out the “chemical weapons” attack.

According to an article in Foreign Policy magazine’s The Cable supplement, titled “Intercepted Calls Prove Syrian Army Used Nerve Gas, U.S. Spies Say” it is revealed that “Last Wednesday, in the hours after a horrific chemical attack east of Damascus, an official at the Syrian Ministry of Defense exchanged panicked phone calls with a leader of a chemical weapons unit, demanding answers for a nerve agent strike that killed more than 1,000 people.

“Those conversations were overheard by U.S. intelligence services, The Cable have learned. And that is the major reason why American officials now say they’re certain that the attacks were the work of the Bashar al-Assad regime — and why the U.S. military is likely to attack that regime in a matter of days.”

The Cable is however not being perfectly honest here. As reported in the Guardian newspaper, it was not “U.S. intelligence services” who “overheard” the conversation, but actually the Israeli Defence Force. 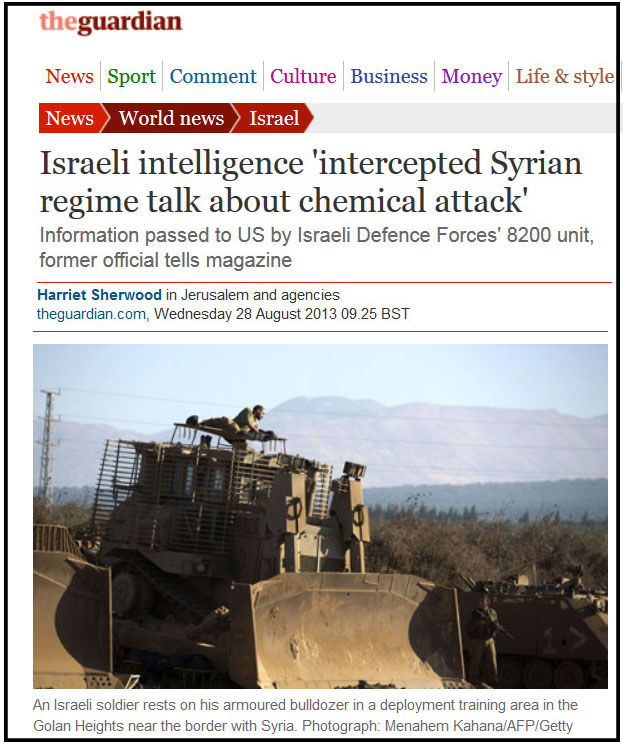 “The bulk of evidence proving the Assad regime’s deployment of chemical weapons – which would provide legal grounds essential to justify any western military action – has been provided by Israeli military intelligence, the German magazine Focus has reported,” said the Guardian newspaper.

In other words, exactly like the “weapons of mass destruction” lies put out about Iraq, the “intelligence” upon which the attack on Syria is predicated has come from the proven liars and Zionist Supremacists in Israel.

According to the Guardian, “Senior Israeli security officials arrived in Washington on Monday to share the latest results of intelligence-gathering, and to review the Syrian crisis with national security adviser Susan Rice.”

However, as The Cable pointed out, even if the telephone intercept is real—and it is not beyond the Jewish Supremacists to manufacture “evidence” (like Mossad was caught out doing with the fake “Niger Uranium for Iraq” forgeries) , there is still no conclusive evidence that the chemical attack was actually ordered by anyone in the government.

The telephone conversation could have been simply someone asking what had happened, following a report that a chemical had been used.

The Syrian opposition has a proven track record of using chemical weapons. In May 2013, Turkish authorities found sarin gas in the homes of Syrian Islamists, ready for deployment to Syria. They found a 2kg cylinder with sarin gas after searching the homes of Syrian militants from the Al-Qaeda linked Al-Nusra Front, Turkish media reported.

Syria’s UN ambassador, Bashar Ja’afari, has also requested that the United Nations experts investigate three chemical weapons attacks against Syrian soldiers which occurred on August 22, 24 and 25 in three suburbs of the Syrian capital. Dozens of soldiers are being treated for inhaling nerve gas.

To add insult to injury, U.S. State Department spokeswoman Marie Harf has admitted that her government “doesn’t know who ordered” the chemical strike.

In another article in The Cable, drawn from the transcript of the latest State Department briefing, Hart is quoted as saying that “The commander-in-chief of any military is ultimately responsible for decisions made under their leadership, even if … he’s not the one that pushes the button or said, ‘Go,’ on this,” Harf said.

“I don’t know what the facts are here. I’m just, broadly speaking, saying that he is responsible for the actions of his regime. I’m not intimately familiar with the command and control structure of the Syrian military. I’m just not. But again, he is responsible ultimately for the decisions that are made.”

The Cable continued: “Because of that lack of clarity, Harf took a beating on Wednesday. In a testy exchange during her daily briefing, Harf very nearly admitted that it makes no difference who in the Syrian government ordered the attack, a reflection of the lack of certainty that still shrouds U.S. understanding of the chemical attack that may have left as many as 1,000 people dead.

“In effect, Harf was left arguing that because no one else could have carried out the attack, it must have been the Syrian government.”

As The Cable pointed out: “Given that U.N. inspectors with a mandate to investigate chemical weapons use were on the ground when the attack happened, the decision to deploy what appears to have been a nerve agent in a suburb east of Damascus has puzzled many observers.

“Why would Syria do such a thing when it is fully aware that the mass use of chemical weapons is the one thing that might require the United States to take military action against it?”

Why indeed—unless the simple and obvious explanation is that the “evidence” is just another Zionist Supremacist lie, designed to goad America and the West into yet another war on behalf of Israel.

Previous Post Does this Video Prove that the Jewish Supremacist Warmongers are Lying about Syria?