Good news from Britain is that the wheels have started to fall off the Zionist warmongering conspiracy to goad that country and America into attacking yet another one of Israel’s enemies, Syria.

In a vote in the British parliament on Thursday, a motion by main Zionist puppet David Cameron which would have sanctioned a British military strike against Syria, was defeated in a vote taken at a full sitting. 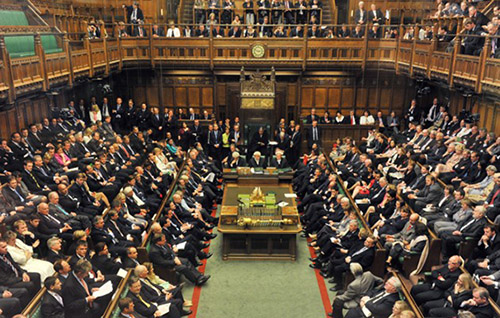 Many of the British lawmakers argued coherently that there was as yet no evidence that the Syrian government was responsible for the attack—as this website and other independent internet news services have pointed out—and that, on the contrary, there was definite evidence that the so-called “rebels” were the ones who had used chemical weapons.

MPs also rejected the government’s motion in support of military action in Syria if it was supported by evidence from United Nations weapons inspectors, who are investigating the allegations of a chemical weapons attack last week.

The BBC quoted senior Conservative Party Member of Parliament David Davis as saying that “We do not want to be conned into a war in effect by actions designed just to do that.

“There are plenty of facts around, or at least reported facts, reported that the UN representative for human rights in Syria thought there was concrete evidence of rebels having sarin gas.

“Other reports that Hezbollah fighters are in Beirut hospitals suffering from the effects of sarin gas.

“Now I think a number of people have said we must have clear evidence to show this House that if there is a casus belli (justification for war), it’s real, not confected, not constructed, and that means perhaps a more aggressive disclosure of intelligence than we would normally have.”

Fellow Conservative Member of Parliament John Redwood pointed out that “Military experts I have talked to say the last thing you want to do is shower down bombs on stocks of chemical weapons.”

“I remain concerned about the impact of flouting international law.

“To intervene without the due resolution sends a message to everyone else that international law can be ignored when it’s inconvenient and as the law of the jungle takes hold it will be increasingly difficult to condemn similar actions by others,” she said.

Large numbers of both the governing party and the opposition Labour Party voted against Cameron’s resolution, giving the pro-war party a strong rebuke.

It was notable that the leading Jewish Supremacists in the Labour Party leadership either supported an attack, or, as in the case of the overtly Jewish leader of that party, Ed Milliband, struck a neutral tone.

Milliband said that “There will be some in this House who say Britain should not contemplate action, even when it is limited, because we do not know precisely the consequences that will follow.

“I’m not with those who rule out action — the horrific events unfolding in Syria do ask us to consider the options available. But we owe it to the Syrian people, to our own country and to the future security of our world to scrutinise any plans on the basis of the consequences they have.”

Milliband’s own amendment, calling for “compelling” evidence was rejected out of hand in a vote by the parliament as well.

“The Assad regime in Damascus is watching very carefully as to whether they will get away with what they have done,” Rifkind told the parliament.

“If they get away with what they have done, if there is no significant international response of any kind, then we can be absolutely certain that the forces within Damascus will be successful in saying we must continue to use these whenever there is a military rationale for doing so.

“There is no guarantee that a military strike against military targets will work, but there is every certainty that if we don’t make that effort to punish and deter, then these actions will indeed continue.”

Cameron said he would abide by the outcome of the vote, which means that Britain will now no longer play any role in the planned attack upon Syria.

“It is clear to me that the British Parliament, reflecting the views of the British people, does not want to see British military action. I get that and the Government will act accordingly,” Cameron said.

The failure of the overtly Zionist conspiracy—in Britain at least—to goad the goyim into attacking Syria is a great victory for all freedom-loving people of the world, and a demonstration that the Jewish Supremacists can be beaten through intensive mobilization and the power of the internet to transmit the truth.

In this particular case, the lies put out by the Zionist Supremacists have been effectively refuted—now the fight is on to ensure that same result is obtained before the Jewish Supremacists in Washington DC succeed in their evil plans.

Previous Post Lies upon Lies: US “Evidence” for “Chemical Attack” based upon “Israeli Intercept”

Next Post Israel to Deport African Asylum Seekers to Uganda