The Israeli Ministry of the Interior has announced that it intends to deport all 55,000 African “asylum seekers” from Israel to Uganda or another African country within the next year—a policy which is completely the opposite of the “open doors” immigration policy which the Jewish lobby in America, Canada and elsewhere demands for all other nations, according to a report in the New Observer. The news was confirmed by an article in the Jewish Times of Israel. 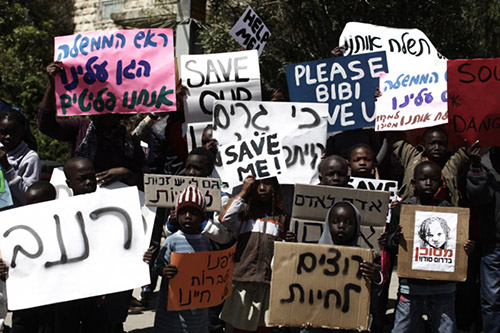 The Israeli policy was announced by Interior Minister Gideon Sa’ar on Wednesday this week, who said that his government had signed an agreement with the first of three African countries (one of which has been identified as Uganda), that will accept the deportees.

The east African nation will shelter Eritrean migrants and act as a transit point for Sudanese people as they head back to their home country, the Interior Minister said.

The move to deport the Africans, set to begin in the coming weeks, will also target those who refuse to leave by clamping down on the conditions of their stay in Israel.

“In the first stage we will focus on raising awareness and information among the migrant population while also helping to make all the exit arrangements,” Sa’ar told the Knesset Internal Affairs and Environment Committee.

He said that Israel will pay for the cost of the flights and provide a financial package that would take into consideration any money and property the migrants have accumulated during their time in the country.

The second stage of the plan will begin in earnest after the coming month of Jewish holidays in September, and will include a direct appeal to the migrants to leave of their own accord within a defined time period, Sa’ar told the Knesset panel.

In addition, the state will begin taking action against those who refuse to go by no longer routinely extending their permits to stay in the country as well enforcing laws against the migrants who work and those who employ them.

According to statistics from the Immigration and Absorption Authority, there are some 55,000 African migrants in Israel, 90% of them from Eritrea and Sudan.

Israel is also engaged in advanced negotiations with four other countries to “absorb” African migrants. The countries in question have asked not to be named, according to an affidavit submitted to Prime Minister Benjamin Netanyahu by Special Envoy Hagai Hadas, who said he recently visited the countries to advance the deal.

The Knesset committee approved several new regulations aimed at preventing more illegal migration, restricting the amount of money African migrants can send out of the country and regulating the process for migrants to take their money and property with them when they leave.

Migrants will be allowed to take the equivalent value of the Israeli minimum wage multiplied by the number of weeks they have been in the country, but no more than that.

These regulations are another deterrent against the spread of [illegal immigration],” Sa’ar said in the meeting. “There are still tens of thousands of [African migrants] today, and we should [make it harder for them to stay] using [regulations that create] a negative economic impact [on them].”

Sa’ar said that the plan would lead to the departure of thousands of migrants over the next year. “I expect the infiltrators leave at a rate of 2,000 to 3,000 per year,” he said. “I am certain that it will reach much greater numbers after the plan involving the third country gains momentum. I remind you that there are 55,000.”