The Jewish Times of Israel editor, veteran Zionist Supremacist and agent David Horovitz, has shown the world the true nature of Zionist Supremacism in a hatred-filled editorial attacking “perfidious Albion” for daring not to believe Jewish propaganda about Syria.

In an editorial titled “Perfidious Albion hands murderous Assad a spectacular victory,” Horovitz asserted that “ a perfect storm of British ineptitude and gutlessness sent the wrong message to the butcher of Damascus, and left Israel more certain than ever that it can only rely on itself.”

The Times of Israel is a Jerusalem-based online newspaper founded in 2012 by UK-born but now “Israeli” Horovitz and his US-based capital partner Seth Klarman.

Horovitz’s hatred of the country he was born in, and its native people, drips from the wording in his editorial. He says that the British decision not to immediately attack Syria just because the Zionists said they should, was the result of “political ineptitude, short-sighted expediency, and gutlessness.” 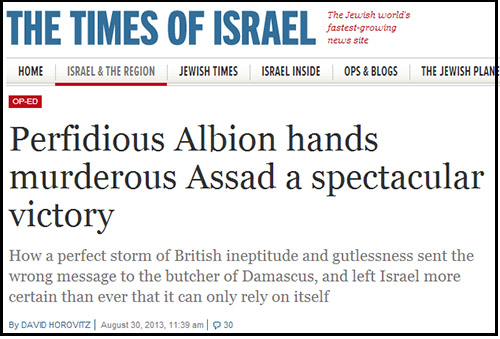 Hortovitz’s own newspaper earlier confirmed that “Israeli intelligence” was the single source for the “evidence” about the claimed chemical attack.

He, like other Zionist Supremacists, is now outraged that the British goyim have refused to unreservedly take the Jewish line as the Gospel truth—and instead have dared to ask to actual proof.

Horovitz, previously editor of the Jerusalem Post, went on to claim that Cameron’s defeat in the British parliament was the result of “prime ministerial foolishness” because he had “tried to steamroll parliament into rubber-stamping a yes to whatever Washington might be planning.

“The bottom line is that the UK, asked by its leader to stand up and fight against the use of WMD to kill innocent civilians in distant Syria, walked away,” Horovitz wrote— ignoring the fact that Israel regularly bombs innocent civilians and children in Gaza and Lebanon with phosphorus and depleted uranium shells.

Even the Jewish leader of Britain’s Labour Party, Ed Milliband, is dismissed by Horovitz for not daring to come out openly in support of an immediate attack on Syria.

The British vote, Horovitz said, “involved an unimpressive Labor opposition leader, Ed Miliband, who has failed to connect to the British electorate and is unloved by his own party, and who saw an opportunity for political gain.”

Finally, Horovitz ended his anti-British hate rant by calling Britain “perfidious” and saying that it was clear that Israel would have to take care of its own interests itself.

“Prime Minister Benjamin Netanyahu will be feeling a further bitter vindication of his long-held and oft-stated conviction that, ultimately, against all dangers, Israel needs to be able to take care of itself, by itself. At the very least, he might be reflecting, perfidious Albion could not be relied upon to rally to the rescue,” Horovitz concluded.

This statement, that “Israel needs to be able to take care of itself” and that “perfidious Albion could not be relied upon to rally to the rescue” is the clearest admission yet that the whole point of the propaganda campaign waged by Horovitz and his tribalists against Syria was to get the goyim to attack the Assad government.

The outpouring of hatred against Britain by Horovitz accurately reflects Jewish Supremacist attitudes towards non-Jews: as long as the latter do Jewish bidding, they are “righteous Gentiles,” but as soon as they dare question their Master’s Voice, they are “perfidious” and “unreliable.”

* Albion is the oldest known name of the island of Great Britain, derived from the ancient Greek.