The Zionist criminal actions of bombing UN hospitals, schools and refugee centers has come after the largest online newspaper in Israel, the Times of Israel, posted up a column saying that Israel was “justified” in carrying out the genocide of Palestinians.

The editors at the Times of Israel quickly realized their error, and hurriedly withdrew the piece, but not before screenshots had been made and the text copied:

“What other way, then, is there to deal with an enemy of this nature other than obliterate them completely?” the Times of Israel article said.

“We have already established that it is the responsibility of every government to ensure the safety and security of its people. If political leaders and military experts determine that the only way to achieve its goal of sustaining quiet is through genocide, is it then permissible to achieve those responsible goals?” 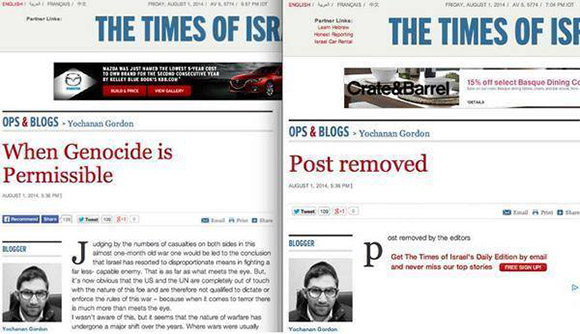 Although the Times of Israel has deleted Gordon’s call to genocide from its website, a similar article by Irwin E. Blank, National Administrative Board of B’nai Zion and Formation Committee Chairman of the NY Salute to Israel Parade from 1978-1982, remains online.

In it, Irwin argues that the Jewish “God” has commanded Jews to “utterly destroy the sinners, the Amalekites, and fight against them until they are exterminated.”

(Blank posted a new postscript to his article that he was not “advocating genocide of the Palestinians in Gaza.”) 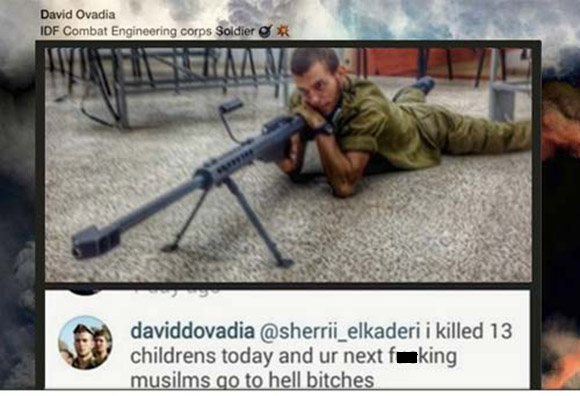 An Israeli sniper has admitted to killing 13 children in the Gaza Strip in one day, as Tel Aviv continues its aerial and ground attacks in the besieged enclave.

Posting on an Instagram account, David Ovadia released a photo of himself holding a sniper rifle, along with the caption “I killed 13 childrens [sic) and ur next f****g muslims go to hell bitches.”

If any other nation, or people, or individual, on earth had done just one of these things, they would have been arraigned by an international court for war crimes–and it is only the power of the Jewish lobby in America and Europe which protects these mass murderers and genocidal maniacs from justice.

* Anyone who thinks this behavior is some aberration among Jewish Supremacists, will be cured of this impression when they realize that nearly one million Israelis–or 16 percent of the Jewish population of that country—attended the funeral of the openly Gentile-hating former Chief Sephardic Rabbi of Israel, Ovadiah Yosef, in October 2013. 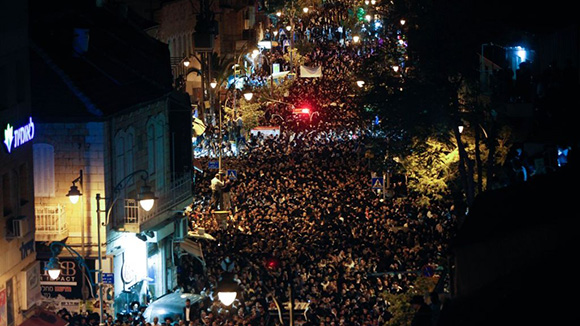 “We’ve been left orphans,” Aryeh Deri, the political leader of the Shas political party steered by Yosef, wailed at a funeral ceremony. “We have no father. We have no leader.”

According to the Times of Israel, Yosef was a “genius of Torah who brought thousands closer to Jewish halacha” (laws).

Israeli President Shimon Peres paid personal tribute, saying that he “was a great man with an unbelievable memory and the wisdom to share his knowledge with others. His contribution was his love for Israel and he solved problems no-one else could solve using his wisdom and spirituality.”

According to the new Sephardic Chief Rabbi Yitzhak Yosef–the son of the recently deceased former chief, there “was no one like him, and there will not be in the future.”

Israeli Prime Minister Benjamin Netanyahu was quoted as saying that Chief Rabbi Yosef was “one of the most important Jewish legal authorities of our generation.”

So what are the words of “genius of Torah,” this “great man with an unbelievable memory” to which Jews apparently so look up to for guidance?

All this praise is for someone who openly hated Gentiles.

Chief Rabbi Yosef said in one of his weekly sermons that God put non-Jews on earth “like donkeys” only to work to serve Jews. 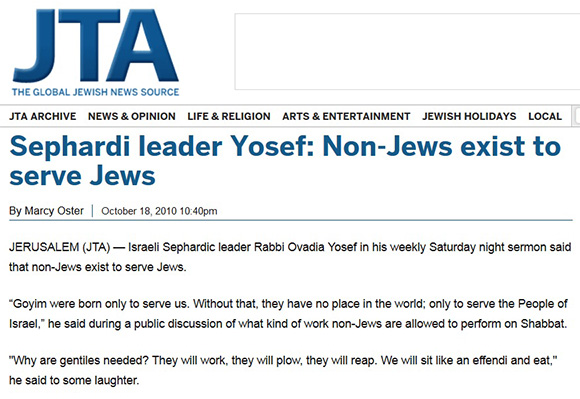 He also called for the open mass physical extermination—the murder, the genocide—of Palestinians and their children.

His views were not kept secret: they were broadcast far and wide in Jewish media. For example, his remarks on the donkey-like nature of Gentiles were republished by the official Jewish Telegraphic Agency: 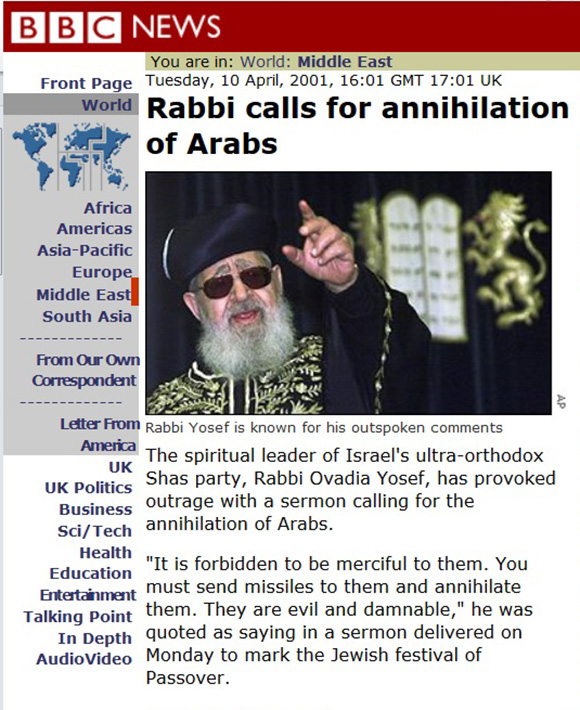 On Palestinians, Yosef had the following to say, as quoted by the BBC:

“It is forbidden to be merciful to them. You must send missiles to them and annihilate them. They are evil and damnable.

“The Lord shall return the Arabs’ deeds on their own heads, waste their seed and exterminate them, devastate them and vanish them from this world.”

The “waste their” seed is a reference to Palestinian children.

So why would a million Jews in Israel turn out to honor such a man at his funeral?

Why would the president of Israel praise such a man as having “wisdom and spirituality”?

Why would the prime minister of Israel praise such a man as being the “most important Jewish legal authorities of our generation”?

The only possible answer to these questions can be that all these people agree with the vicious anti-Gentile hatred and genocidal intent of this Chief Rabbi of Israel.

There is no other possible conclusion.

CLICK ON THE IMAGE BELOW FOR THE OUTRAGEOUS RACIST HYPOCRISY OF ISRAEL: 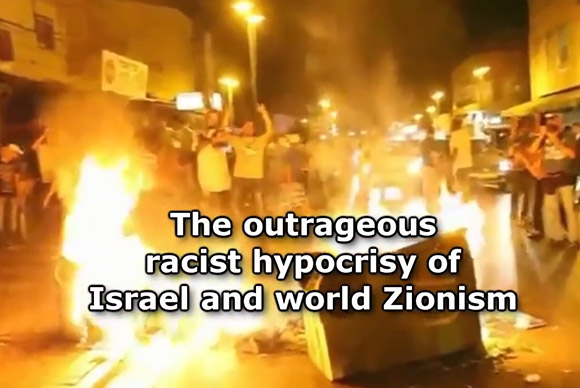 Previous Post Hear Dr. David Duke on How the World is Waking up to Zio-Extremism – Today Ken O’Keefe!