Jewish Supremacists in Europe—facing an increasing backlash over the overtly racist and supremacist behavior of their tribalist state of Israel—have fallen back onto one of tier oldest canard: that “Jews are vanishing because of assimilation.”

This new campaign—launched in the Israeli National News Service’s Arutz Sheva TV service and online publication (meant for Jews only, of course) has announced in a hysterical article that research conducted by “over 800 rabbis” of the Rabbinical Center of Europe (RCE) and European Council of Jewish Communities (ECJC) has revealed “that assimilation in the European continent has reached a shocking rate of 80%.” 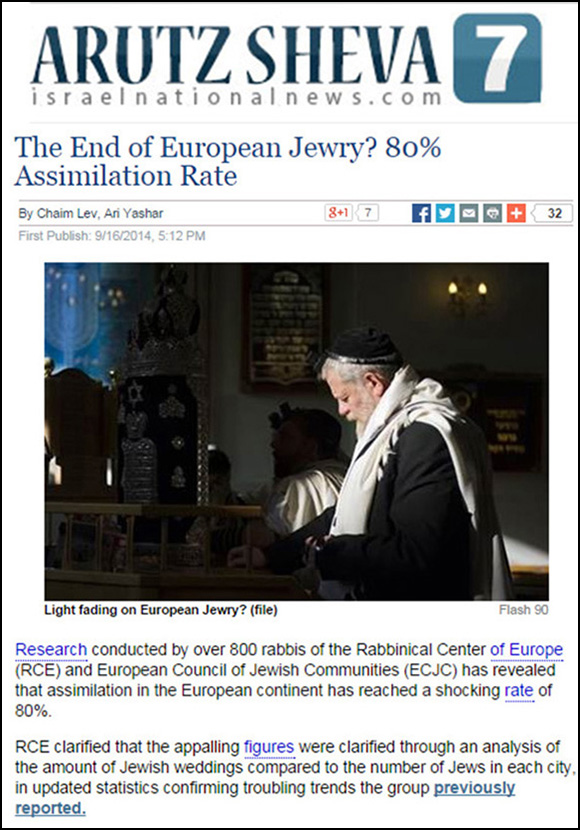 Not content with calling this alleged figure “shocking”, the Israeli national news service goes on to describe it as “appalling” as well, saying:

(As an aside, imagine what these same Jewish journalists would be saying if any other people on earth wrote in their media that it was “appalling” and “shocking” that their own nation was disappearing through intermarriage with Jews!  There would be screams of “racist” and “hate” from the rooftops—but Jewish Supremacists can of course say these things about Gentiles without a word of criticism).

The answer to the first question is an emphatic no.

According to all available figures—including those put out by all major Jewish organizations themselves, the number of Jews in the world is not only at an all time high, but steadily growing.

For example, the Berman Jewish Databank, a project of the Jewish Federations of North America, in a report co-sponsored by the  American Jewish Yearbook, Association for the Social Scientific Study of Jewry (ASSJ), the  University of Connecticut’s Center for Judaic Studies and Contemporary Jewish Life, and the University of Miami’s Sue and Leonard Miller Center for Contemporary Jewish Studies, put the world’s Jewish population in 2013 at 13,854,800—an increase of 0.74% over the previous year.

What this means is that there are more than 11 million Jews in Israel and America alone—without even counting the significant Jewish populations in Europe, Canada, Australia and elsewhere.

In addition to this, the Jewish population which is increasing the fastest is the orthodox and ultra-orthodox elements, both inside and outside of Israel.

The Jewish population of New York is widely estimated to be at least 1.1 million—and most likely more. Some 40 percent of Jews in the city identify themselves as Orthodox, an increase from 33 percent in 2002; and 74 percent of all Jewish children in the city are Orthodox.

All the statistics therefore show that in real terms, the number of Jews in the world is actually increasing.

Whey then are Jewish Supremacists saying that “Jews are vanishing” because of “appalling and shocking” intermarriage rates?

To answer this second question requires an understanding of Jewish Supremacist psychology.

Jewish Supremacism relies on herding Jews together into a racial unity against the rest of the world. In order to achieve this—particularly in times of pressure (such as the “bad publicity” created by the Jewish state’s recent murderous campaigns against Gaza), the leaders of the Jewish Supremacist community have a few stock canards which they use to “pull Jews into line.”

Some of these canards include exaggerated and often completely fabricated reports of “increasing anti-Semitism” (and often gangs of Jews will even carry out “grave desecrations” or “swastika daubing” sprees to try and give substance to this paranoia).

But the most commonly used Jewish Supremacist canard is the one that “Jews are about to disappear.”  This canard appears regularly at intervals of ten years or more.

For example, in 1997, infamous Jewish Supremacist Alan M. Dershowitz produced a book titled “The Vanishing American Jew” in which he wildly claimed that “American Jews–as a people–have never been in greater danger of disappearing through assimilation, intermarriage, and low birthrates.”

This was seven years ago—but, as the figures recited above show, in fact the Jewish population has continued to grow, year upon year—and is in global terms, certainly growing faster than the European population, which is truly in decline.

The claims that “Jews are disappearing” is nothing more than yet another symptom of the Jewish Supremacist mindset and psychology which requires Jews to be in a constant state of struggle with, and opposition to, non-Jewish society.

Next Post Hear Dr. David Duke on ISIS, the Jewish Lobby and “Assimilation”