If you want to know who really rules America just read this story. A memorial to American Korean War Veterans that has stood for decades on top of Mt. Soledad near San Diego has been ordered removed by a federal judge.

It had to go because the memorial to American dead simply included a Christian cross. 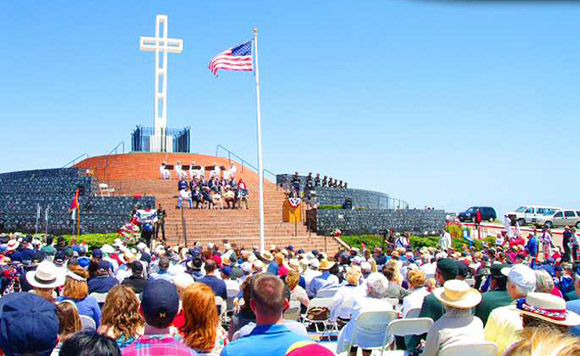 That’s right. The federal court ruled that having a Christian cross as part of an American war memorial that has stood for decades, violated the principle of “separation of church and state.”

A Christian cross as part of American war memorial must be forbidden, but in thousands of localities across America at this moment, Jewish Menorahs stand with the protection of USA federal court protection. Here is picture of the Menorah that is erected every year in front of the White House. 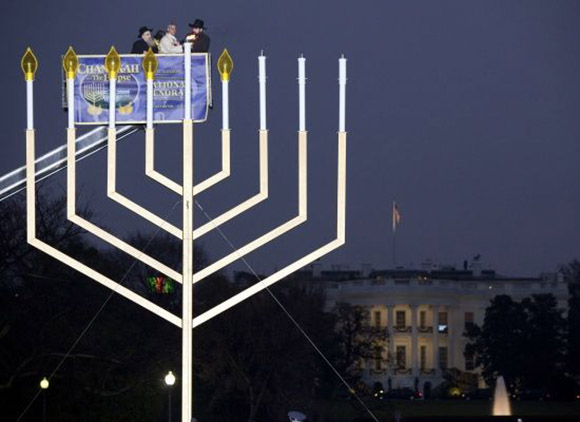 The organization behind the federal court case to destroy the cross was none other than the Jewish War Veterans. In fact over the last five decades has had the lowest percentage of service men than any other ethnic group, unless of course you can count the Israel army where many have served.

The chutzpah of these Jewish groups in endeavoring to destroy American heritage is downright shocking, but it has become so commonplace that it gets hardly a yawn from Americans any more.

When you are rulers you don’t have to make any sense, you can say whatever you want about anything and get away with it. This is one of those cases and it is so obvious it shameful.

The Menorah of course is the oldest and most important symbol of the Jewish religion. It is a symbol of Jewish racist opposition to assimilation. It actually celebrates the attack of radical Jewish Maccabees on Greeks and Syrians who were not trying to harm Jews but encouraging Jewish assimilation with them. The Jewish radicals massacred thousands of Greeks and fellow Jews who dared to adopt Greek values.

The giant Menorah religious symbol at the White House is lit by Rabbi’s and other extremist Jews who openly oppose intermarriage of Jews and non-Jews, and who support the “Jewish State of Israel.”

But somehow putting the oldest symbol of Jewish religion and lighting it in a ceremony of Jewish religious officials on the grounds of the White House is not a violation of church and state!

Jews are Justices on the Supreme Court at a rate at 40 times more than non-Jews, a whopping 4,500 percent than their population would dictate in comparison to non-Jews!

That’s why Jewish genocidal symbols can be displayed but traditional Christian Crosses are illegal by the interpretation of the Ziopreme Court who is the ultimate arbiter of American policy, the one part of government that the President and Congress cannot overturn, for the Supreme Court is the only body that determines the Constitutionality of a policy.

The American people cannot ever be truly free until this malevolent, hateful power is defeated and deposed!

Previous Post Zionism is “Threat to the Whole World, Not Just Palestine or Iran” : Dr. David Duke on Press TV