Zionism is a threat to the whole world, not just Iran or Palestine, Dr. David Duke told a Press TV interview broadcast yesterday. 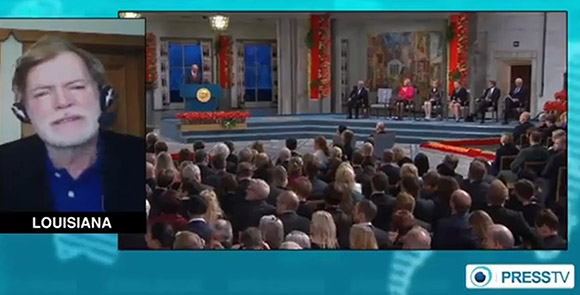 Asked about the demand made by the Director General of the Organization for the Prohibition of Chemical Weapons (OPCW) for Israel to join the Chemical Weapons Convention (CWC), Dr. Duke said this “is a step in the right direction but the reason why it is not going to get traction is because of the Zionist control of the European and the American and the globalist media.

“They control 80 percent of the globalist media in the world and therefore they can suppress stories they do not like and they can distort the truth.”

Hereunder followas a tranwscript of the rest of the interview, and a video:

DD: But the reason why there is no action on these things is because they control the American media, dominate it and they dominate the world media. So most of the world is ignorant of this.

We have to realize that Zionism is a problem that goes way beyond Palestine and Israel, way beyond the relations with … Iran. Iran has followed all the rules. You signed the Nuclear Non-Proliferation Treaty, you allowed inspections, you did everything correct and you have massive sanctions.

Israel kicks 600,000 people out of their homes, kills tens of thousands of men, women and children, tortures hundreds of thousands of people in their jails, commits terrorism around the world, assassinations, even terrorism against its biggest benefactor, my country, and nothing is going on. There is no sanctions against Israel. It is amazing.

However, we saw the action taking place there, the OPCW getting involved and Syria agreeing to destroy its chemical weapons arsenal but the case of Israel for one we saw what happened in Gaza, we had of course the reports and the evidence that for instance white phosphorus was used in the war against Gaza but we did not get the same kind of response, did we?

DD: No we did not get it because they have this domination of American political process, the process in the UK, the process in France, many other countries and they control the discourse by their control over the world.

The fact that your people are suffering by the hundreds of thousands with the more difficult economic situation because of their manipulation of international policy is a great war crime. They also caused the embargo against [Iraq] which was at one time your enemy but they killed 500,000 children because of that embargo.

There is an amazing dichotomy between truth and justice and what goes on in terms of anything regarding Israel because the truth is the Zionist do not just control Palestine.

They control much of the Western world and they have enough power that they can suppress any contradiction of this evil that they do on a constant level.