The leading Jewish Supremacist organization in America devoted to promoting mass immigration, the Hebrew Immigrant Aid Society (HIAS) has called on all Jews to support an increased flood of “asylum seekers” to enter the US—while at the same time supporting Israel which actively arrests, imprisons and deports all non-Jewish asylum seekers.

In an article titled “Jewish Americans Should Care About Refugees Today” published in the Jewish Week paper, HIAS president Mark Hetfield and board chair Dale Schwartz announced that last year, “just 36 of the nearly three million Syrian refugees were resettled in the United States.”

This, according to these Israel-loving Jewish Supremacists, was far too few, even though, they went on to say, in total, the United States resettled 69,930 refugees in 2013, more than any other country in the world”—but, they lament, “only half the number we resettled 20 years ago.”

According to a report in the UK’s Guardian newspaper, Israel has granted asylum status to one  (1) applicant out of 4,603 applications in 2011. 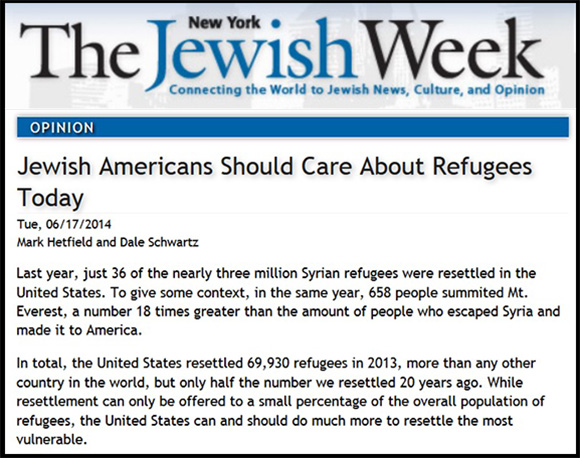 The use of the phrase “we” is of interest here—by “we” these Jewish Supremacists mean Americans.

They go on to give details of how the HIAS arranges refugee settlement in America:

“Through refugee resettlement, American communities from Seattle to San Diego, Pittsburgh to Clearwater, Fla., are thinking globally but acting locally. Through partnerships between the U.S. government, HIAS, and the local community and Jewish family service agencies, refugees receive a warm welcome, job placement, language training, and the opportunity to become productive members of society with restored dignity.”

Furthermore, the HIAS then complains that America is “creating obstacles” for refugee settlement:

“However, few refugees in the world are lucky enough to be resettled. While the United States welcomes a greater number of refugees than any other country, U.S. policy nonetheless imposes inefficient and unnecessary hurdles on people who have fled their homes fearing torture, imprisonment, or worse. Layers of bureaucratic requirements have been added over the decades, resulting in multiple interviews that seek identical information. This wastes resources and needlessly re-traumatizes refugees. Additionally, duplicative medical and security checks are required but expire multiple times during the resettlement process.”

To solve this apparent problem, the HIAS leaders then call on supporters to underwrite a new bill before Congress “to improve protections for refugees and reform the lengthy approval processes for qualified refugees, who now must contend with months or even years of bureaucratic red tape before being allowed to travel to the United States.”

The HIAS goes onto state that:

“As Jews, we understand the challenge of being refugees. Nearly all of us have relatives who were forced to leave everything behind and rebuild new lives in a foreign country. Let us mark World Refugee Day by remembering our own history and lending the voice of our community to lead this cause. On June 20, call your Senators and Congressional Representative and tell them refugees are not victims but brave, resilient, and resourceful people who contribute to their neighborhoods and our country.

“Ask your Senators and your Congress member to add their names as co-sponsors of the Refugee Protection Act to ensure that we do all that we can as a nation to help the men, women and children who have been forced to flee their own countries because of who they are or what they believe.”

However, in Israel, which these same Jewish Supremacists support so fanatically, exactly the opposite policy is enforced. 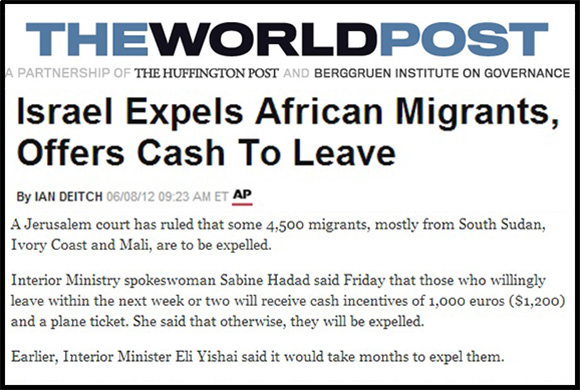 In the Jews-only state, according to a recent (March 5, 2014) article in the Israeli Haaretz newspaper, “Instead of protecting refugees as required by law, Israel boasts of its success in taking away their liberty and cajoling them to leave.”

According to the Israeli newspaper, recent “bragging by the Interior Ministry regarding the increase in the number of asylum seekers who agree to ‘leave voluntarily’ demonstrates how Israel has turned the refugee laws upside down.

“The new amendment to the Prevention of Infiltration Law, which passed after the High Court had rejected the previous amendment, undermines [asylum seekers’] liberty by making it possible to imprison them in the Holot facility in the Negev without any time limitation. Clearly, when there is a threat of endless imprisonment hovering over the asylum seekers, ‘voluntary’ departure is not really voluntary.

“Moreover, it is also clear that protection from expulsion to a place where your life and liberty are in danger is meaningless when it is ostensibly provided in a place that itself threatens your liberty.

“Today asylum seekers are forced to choose between expulsion to Eritrea, where they are likely to lose their liberty, and remaining in Israel, a place where they are also likely to lose it. In that sense one could say that Israel is no longer a safe place for refugees and asylum seekers. Ostensibly Israel is not violating the principle of non-refoulement , since it is not expelling the asylum seekers to Eritrea. But it is creating a danger that strips the principle of its meaning.

“When the interior minister says that the sharp increase in the number of those leaving stems from steps such as the new law and summonses to the Holot facility, he is admitting—and even boasting—that the asylum seekers who are asking to leave are doing so due to their fear of imprisonment.

“Therefore, the new anti-infiltration law, like its predecessor and in many ways even more so, pulls out the rug from under the claim that Israel is granting the required protection to asylum seekers to whom the principle of non-refoulement [return to a territory where their lives are in danger] applies.

“Transferring asylum seekers to Uganda, as has been reported, is also a violation of the principle of non-refoulement, which forbids expulsion to a third country unless clear assurances have been given that it will protect the asylum seekers and will not expel them to a place where they are in danger.”

In other words, in America Jewish Supremacists demand that endless numbers of refugees be granted unlimited access to that country; but

In Israel, these same Jewish Supremacists make sure that as few as possible—and preferably none—non-Jewish refugees enter that country.

This strategy of one policy for the Goyim nations, and another policy for the Jews-only state, is part of a twin Jewish Supremacist strategy, to firstly divide-and-conquer non-Jewish nations, and secondly, to try and draw attention away from the ultra-racist state of Israel. 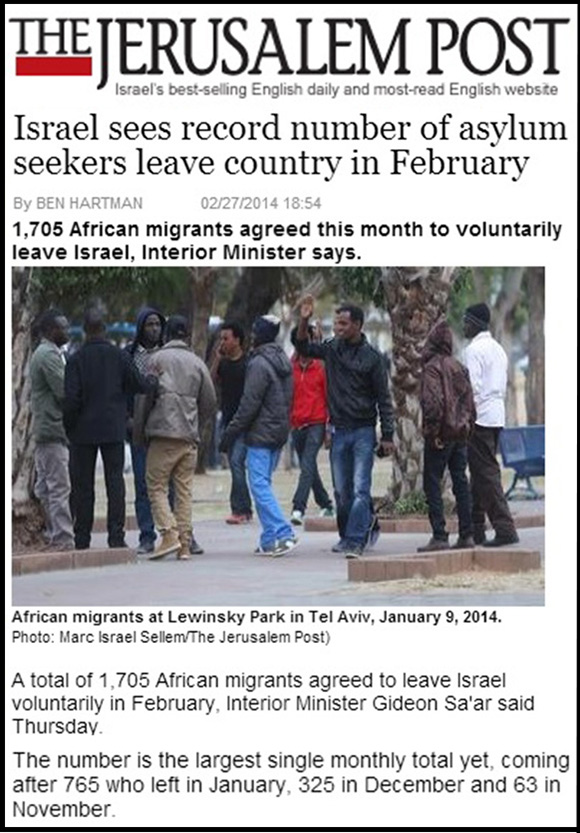