Although the Jewish Supremacist-controlled mass media has been silent over the Jewishness of the newly-appointed head of the Federal Reserve bank, Janet Yellen, in their own ethno-centric media meant for Jews only, they are celebrating and boasting of the fact that, as they put it, “another” Jew has taken over at the Fed. 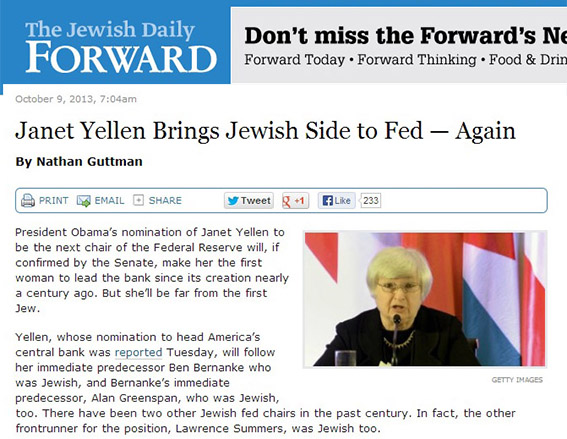 According to an article in the Jews Daily Forward—one of the US’s largest Jewish papers—boasted that:

The Daily Forward article was even headlined “Janet Yellen Brings Jewish Side to Fed — Again” and went on to proudly detail all aspects of her Jewishness, even boasting that “In 1978 Yellen married economist George Akerlof, who is also Jewish. Akerlof won the Nobel prize for economics in 2001 with two other Americans. While living in Berkley, Calif., Yellen and Akerlof were members of the Reform Congregation Beth El, where their only son attended pre-school.”

“If confirmed by the Senate, Yellen would succeed Ben Bernanke and be the third consecutive Jewish economist to head the Federal Reserve,…”

In addition, the JTA boasted that even the only other candidate for the post was also Jewish:

““Obama had favored his first Treasury secretary, Lawrence Summers, for the job. Summers, who also is Jewish, pulled out because of opposition among Senate Democrats who blame his policies favoring deregulation for slowing the economic recovery.”

There are two important points to be learned here:

1. The obvious fact of the Jewishness of all the Chairman of the Federal Reserve of the United States for the past 25 years (Greenspan was first appointed in 1987) is completely covered up by the media intended for the non-Jewish masses, in strong contrast to the ethno-centric Jews-only media where this fact is loudly announced; and

In April 2013, for example, the Federal Reserve admitted that it had “inadvertently” released the minutes of its March 19-20 Federal Open Market Committee meeting a full day early—but only to what was described as “small group of around 100 Congressional staffers and trade lobbyists.”

Many of these “lobbyists” work for, or have worked for, hedge funds, banks and other financial institutions, and they included individuals who work for Citigroup and JP Morgan Chase & Co.

The Federal Reserve did not release the same information to the broader markets until 17 hours later, giving its “contacts” as full day’s trading head start on this information.

Given the proven cohesive nature of Jewish tribalism, can there be any doubt that this sort of thing carries on all the time?

Next Post Israeli spying on U.S. extends to every man, woman, and child