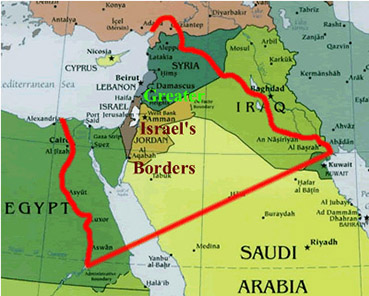 The Zionist Supremacist plan to encourage war in Syria—and the entire Middle East—forms part of a long term strategy going back decades, as detailed in the February  1982 Zionist journal KIVUNIM (Directions).

The study, titled “A Strategy for Israel in the Nineteen Eighties” was written in Hebrew, and only translated into English by courageous anti-Zionist Supremacist Israel Shahak.

“The following essay represents, in my opinion, the accurate and detailed plan of the present Zionist regime (of Sharon and Eitan) for the Middle East which is based on the division of the whole area into small states, and the dissolution of all the existing Arab states,” Shahak wrote in his introduction.

“The idea that all the Arab states should be broken down, by Israel, into small units, occurs again and again in Israeli strategic thinking.”

The original full study paper, as translated by Shahak, is available in full at this link here.  Below follows selected extracts:

“At the outset of the nineteen eighties the State of Israel is in need of a new perspective as to its place, its aims and national targets, at home and abroad.

“The dissolution of Syria and Iraq later on into ethnically or religiously unique areas such as in Lebanon, is Israel’s primary target on the Eastern front in the long run, while the dissolution of the military power of those states serves as the primary short term target.

“Syria will fall apart, in accordance with its ethnic and religious structure, into several states such as in present day Lebanon, so that there will be a Shi’ite Alawi state along its coast, a Sunni state in the Aleppo area, another Sunni state in Damascus hostile to its northern neighbor, and the Druzes who will set up a state, maybe even in our Golan, and certainly in the Hauran and in northern Jordan.

“This state of affairs will be the guarantee for peace and security in the area in the long run, and that aim is already within our reach today.”

“Iraq, rich in oil on the one hand and internally torn on the other, is guaranteed as a candidate for Israel’s targets.

“Its dissolution is even more important for us than that of Syria.

“Iraq is stronger than Syria. In the short run it is Iraqi power which constitutes the greatest threat to Israel.

“An Iraqi-Iranian war will tear Iraq apart and cause its downfall at home even before it is able to organize a struggle on a wide front against us.

“Every kind of inter-Arab confrontation will assist us in the short run and will shorten the way to the more important aim of breaking up Iraq into denominations as in Syria and in Lebanon.”

“There is no chance that Jordan will continue to exist in its present structure for a long time, and Israel’s policy, both in war and in peace, ought to be directed at the liquidation of Jordan under the present regime and the transfer of power to the Palestinian majority.

“Changing the regime east of the river will also cause the termination of the problem of the territories densely populated with Arabs west of the Jordan. Whether in war or under conditions of peace, emigration from the territories and economic demographic freeze in them, are the guarantees for the coming change on both banks of the river, and we ought to be active in order to accelerate this process in the nearest future.”