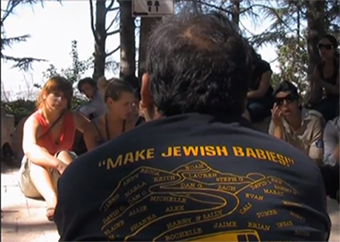 Contrary to claims put out by the Zionists, Israel’s Jewish population is steadily increasing due to a combination of continued Jews-only immigration and the steady expulsion of non-Jews, especially Palestinians.

According to an article in the Jerusalem Post, based on the latest Israeli Central Bureau of Statistics’ population report, the country’s total population is now 8.081 million.

The remaining 4.2%, some 345,000 inhabitants, are non-Arab Christians as well as people of other religions and those with “no religious affiliation”—the latter figure can also, and indeed does, include Jews as well,

Most of the new Jewish immigrants came from countries of the Former Soviet Union and the majority of returning residents came from Canada and the United States.

More than half of the new emigrants are between the ages of 20-44, with an equal gender distribution.

Israel recently introduced DNA tests for new immigrants to order to prove that they are Jewish—making a mockery of those who claim there is no biological base to Judaism—and also demonstrating the strictly racial nature of that state’s immigration policies.