The Israeli secret service Mossad has been named as the source of at least part of the international phone hacking scandal which was blamed solely on the US’s National Security Agency.

The allegation that Israel was behind the hacking of millions of French phones has been made in the French newspaper Le Monde. 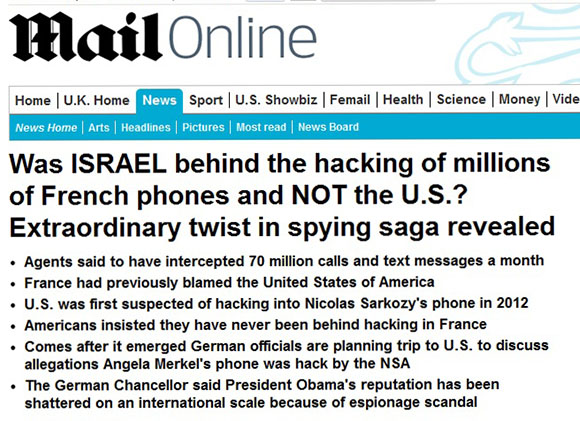 An article for that paper, written by journalist Glen Greenwald—who first revealed the extent of the NSA spying scandal with his source, Edwin Snowden—said that the U.S. was first suspected of hacking into French president Nicolas Sarkozy’s phone in 2012 when he was unsuccessfully trying for re-election in 2012.

Up until now the French have been blaming the U.S., even summoning the country’s Paris ambassador to provide an explanation.

But the Le Monde newspaper has now produced evidence that it was in fact Israeli agents who were listening in, and that the Mossad is said to be part of an international spying network which intercepts “more than 70 million calls and text messages a month.”

A note published in Le Monde shows that the Americans refused to rule out Mossad, Israel’s notoriously uncompromising intelligence agency, or the ISNU, Israel’s cyber-intelligence unit.

Tailored Access Operations (TAO), the branch of the US National Security Agency (NSA) which deals with cyber-attacks, is referred to throughout the note.

It reads: ‘TAO intentionally did not ask either Mossad or ISNU whether they were involved as France is not an approved target for joint discussions.’

A 2008 NSA note says that the Israelis are ‘excellent partners in terms of sharing information’, but it also says that Mossad is ‘the third most aggressive intelligence service in the world against the United States’.

The news that Mossad is involved in this massive spying operation comes as no surprise to informed observers.

The Jewish Supremacist lobby in America dictates U.S. domestic and foreign policy, so it would be logical that the Israeli secret service would be at the forefront of abusing American intelligence capabilities as well.