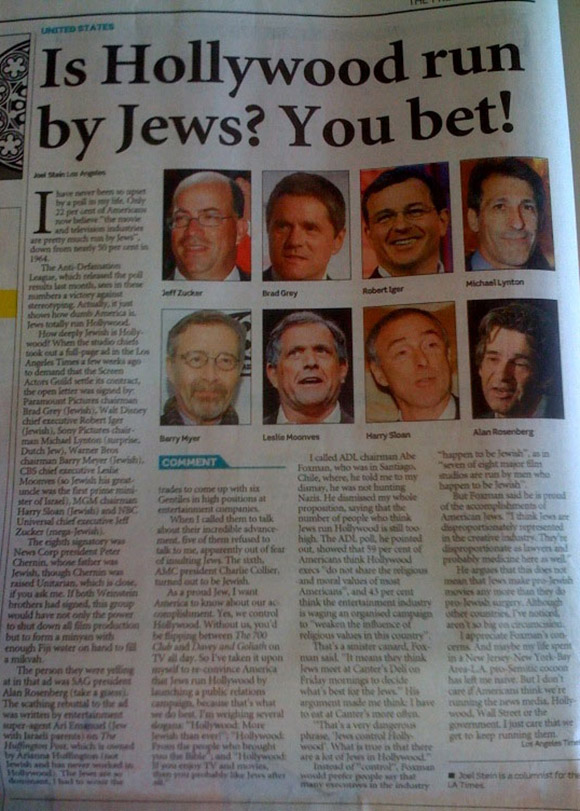 Oldman, whose Hollywood career has included some star performances in blockbusters, made his remarks in an interview with Playboy magazine’s  July/August issue, when the topic of Mel Gibson came up.

Referring to the famous incident when Gibson made some comments about Jews after being arrested for driving under the influence, Oldman said that Gibson “got drunk and said a few things, but we’ve all said those things.

“We’re all f**king hypocrites,” Oldman continued, pointing out the probable truth that almost everyone, Jews as well, would have used some sort of ethnic comment in private.

He said that Gibson has been made into an “oucast” but “some Jewish guy in his office somewhere hasn’t turned and said, ‘That f***ing kraut’ or ‘F*** those Germans,’ whatever it is? We all hide and try to be so politically correct. That’s what gets me.”

Oldman then went on to explain why exactly Gibson was singled out when other people are not:

“Mel Gibson is in a town that’s run by Jews and he said the wrong thing because he’s actually bitten the hand that I guess has fed him – and doesn’t need to feed him anymore because he’s got enough dough.” 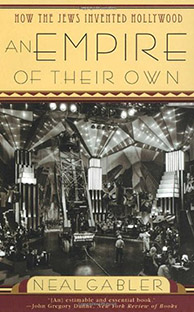 This was the comment which drove the Jewish Supremacist Anti-Defamation League (ADL) over the edge, and it issued an attack over his “choice of words”—in other words, for simply speaking the truth, which in ADL eyes, amounts to an “anti-Semitic candard.”

Oldman, obviously realizing that his future career opportunities had probably just gone out the window, then issues a govelling apology—but bizarrely, so doing, quoted once again from a new book which actually discusses—and proves—that Jews do run Hollywood

“If, during the interview, I had been asked to elaborate on this point I would have pointed out that I had just finished reading Neal Gabler’s superb book about the Jews and Hollywood, An Empire of Their Own: How the Jews invented Hollywood,” Oldman said in his apology.

“The fact is that our business, and my own career specifically, owes an enormous debt to that [Jewish] contribution.”

In publicly announcing what everyone knows—and which the ADL hysterically denounces as a “canard”—Oldman has joined Marlon Brando as another Hollywood Star who has dared to “bite the hand that feeds them. 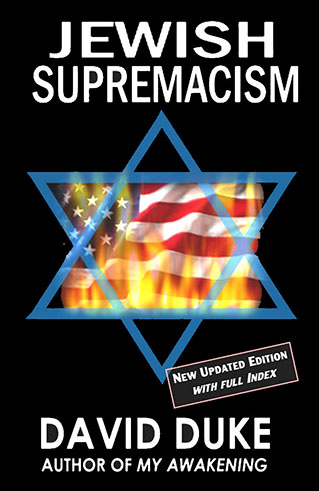 This extract below from Dr. David Duke’s book, Jewish Supremacism, serves as a pertinent reminder of that incident:

The Lesson of Marlon Brando

Jewish power is such that they can make craven even the greatest of Hollywood icons. Marlon Brando is a prime example.

In the early days of his acting career he was completely under the control of Jewish agents and acquaintances. Brando wrote in his autobiography that he was given an important role in a disgustingly pro-Zionist play called A Flag Is Born, written by avid Zionist Ben Hecht and directed by Luther Adler. As Brando notes,

It was essentially a piece of political propaganda advocating the creation of the state of Israel … Everyone in A Flag Is Born was Jewish except me … I did not know then that Jewish terrorists were indiscriminately killing Arabs and making refugees out of them in order to take their land … The play, as well as my friendship with the Adlers, helped make me a zealous advocate for Israel and later a kind of traveling salesman for it…

Brando then began giving propaganda speeches for a Zionist organization, and even contributed money himself to the Zionist Irgun organization, a terrorist group.

Marlon Brando later learned the truth about Zionism and dramatically changed his opinion.

“Now,” he said in 1994, “I understand much more about the complexity of the situation than I did then …   I sided with Jewish terrorists without acknowledging that they were killing innocent Palestinians in their effort to create the state of Israel …  One of the strangest government policies is that largely because of the political influence of Jewish interests, our country has invested billions of dollars and many American lives to help Israel reclaim land that they say their ancestors occupied three thousand years ago.”

During an appearance on the Larry King television show, actor Marlon Brando dared to comment that “Hollywood is run by Jews. It is owned by Jews.”

Brando contended that Jews are always depicted as humorous, kind, loving, and generous while they slander every other racial group, “but are ever so careful to ensure that there is never any negative image of the kike.”

Jewish groups came down unmercifully on Brando, stating in their press releases that they would see to it that he “would never work again.”

No one in the Jewish press seemed to notice that the threats simply validated Brando’s observation of their unchallenged media power. Brando became so intimidated by the onslaught of hatred and threats against him that he had to arrange an audience with Rabbi Hier of the Simon Wiesenthal Center.

In probably the best acting job of his life, Brando cried and got on his knees and kissed Rabbi Hier’s hands, begging for forgiveness for offending the supreme Jewish gods of the Western World.

Brando publicly renounced his heresy against the new Jewish gods, and thus the Jewish high priest absolved him of his sin.

Brando had become a good object lesson for famous Gentiles who might dare speak the truth about Jewish supremacism, and he has said nothing but positive things about Jews ever since.

If someone wants to understand how the Jewish supremacists maintain their almost complete media control, the Brando incident is an excellent illustration. They do it by both the carrot and the stick.

They reward those Goyim who go along with their evil as they did Brando in his early career, but they are unmerciful to anyone who dares to even utter a word against them. Public figures who publicly oppose them have to be either incredibly stupid or magnificently brave.

Marlon Brando naively thought that by telling the obvious truth about Israel he might endure serious criticism, but he never dreamed of the tidal wave of filth and abuse that would descend upon him.

In a pitiful scene, Brando prostrated himself at the feet of his master like a whimpering dog, literally licking the hand of the tyrant that beat him.

There can be no renewal for our people until that kind of intimidating power is broken. There is no possibility of redemption for our people until we summon the courage necessary to defy our Jewish supremacist overlords. Finally, no regeneration of our society can occur until real freedom of speech and press is restored.

Once I discovered the Jewish power over the American media, I resolved never to surrender my freedom of speech in deference to it. No matter if it might cost me my reputation, my freedom or even my life; I became and still remain determined to oppose the media masters who seek to destroy our way of life and our very life form itself. I am confident that in time my kinsmen will likewise rise up in defiance rather than kneel in dishonor — as Marlon Brando did— to our would-be masters.

Read Jewish Supremacism and more incredibly brilliant gems such as the this in the most important book on Earth revealing the Jewish supremacist threat.