As the Jewish Supremacist continue their slaughter of Palestinians in Gaza, they and their western mass media controllers have put out the lie that they are “warning” residents of targeted houses to flee their homes before they are destroyed through a “tap on the roof” rocket warning. 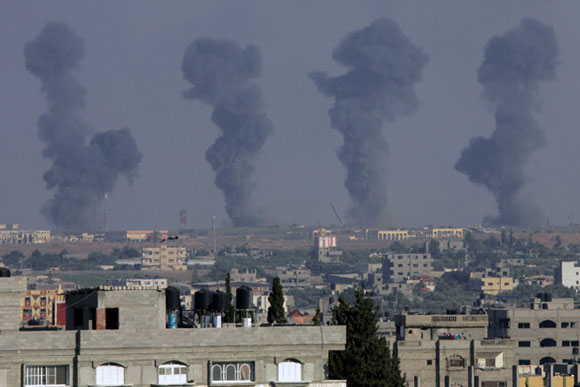 This, the Zio-liars claim, is how they are trying to prevent “civilian causalities.”

Israeli army spokesperson Lt. Col. Peter Lerner, speaking to fellow Zionist agent and openly–declared AIPAC activist Wolf Blitzer (who pretends to be a “journalist” on Zuckerman’s CNN news programming) said “We tap harmlessly on roofs, he said, so the residents can leave.”

But, like everything else these masters of the lie say, the truth is always the direct opposite. Several videos have emerged showing that the time delay between the “tap on the roof” and the real explosion is so small that it is physically impossible to evacuate the premises in time.

For example, in the video below, it can be seen that the “tap on the roof” explosion takes place 57 seconds before the building is destroyed—an impossible period to evacuate a three story building with women and children inside.

Another video shows a “gap” between the “tap on roof” warning missile to be 65 seconds: once again, an impossible time to allow for an evacuation.

According to the Times of Israel, the Israeli Air Force is now dropping “one-ton bombs” on houses in Gaza, which cannot do anything else but cause civilian deaths—given that the Gaza strip is about the same size as Brooklyn and Manhattan in New York. The Israeli Air Force has now carried out over 1,000 airstrikes on the Gaza Strip.

* American taxpayers will be happy to know that the millions of dollars they have handed over to Israel to build the “Iron Dome” missile defense system, has been wasted.

According to the Israeli Defense Force’s official website, the Iron Dome missile defense system has shot down 191 rockets—out of the 1081 Qassam rockets launched so far at the Zionist state.

Of the 845 Gaza rockets not shot down, 845 have entered Israeli airspace without being intercepted—although, of course, the amateurish homemade nature of the Gaza rockets has meant that they have not reached intended targets, have failed to explode, or have simply fallen short on open ground.

This means that the “highly advanced” Iron Dome system cannot even shoot down home-made, fertilizer and sugar powered, spot-welded iron pipes (which is what the Qassam rocket is), despite the millions of US tax dollars poured into the technology.

Next Post Hear Dr. David Duke on the Reality of Gaza