Historian and former CIA Intelligence Officer and analyst Michael Scheuer has openly identified the Jewish lobby as the main protagonists behind attempts to force America into the Syrian war. 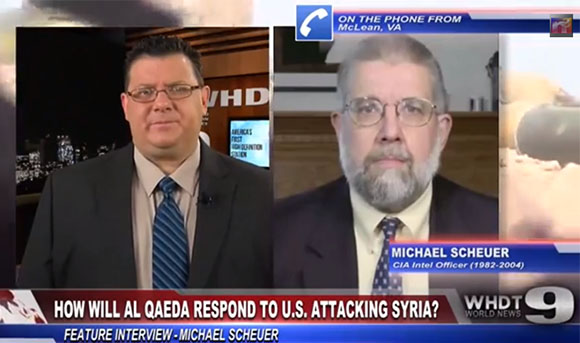 He made the comments during an interview with local TV station WHDT which broadcasts in the West Palm Beach, Miami and Boston region.

Mr Scheuer emphasized the central role of the American Jewish community and the Jewish-Israel lobby in the Washington in pressing for a US military strike against Syria.

“We are owned by foreign governments,” he said, going on to identify the Jewish lobby as being brought in to put pressure on Congressmen to support an American military strike against Syria.

“The reason that Obama delayed a week was to allow the Israeli lobby in this country to go around and lobby the Congressmen.

“I don’t think they can change the opinion of the American people . . . but they [the Jewish lobby] have so much influence with the congress because of campaign contributions, because of the threat of suing the media against them that they can probably swing the majority to vote in favor of the war.”

“The decisions are going to be made by Congress and the President . . . and the people who pay them off, the Israelis, the American Jewish community.”

Mr Scheuer went on to call John McCain and other “shills for the Israelis.”

“There is no authentic American interest in plunging into the Syria conflict. Instead, US policy in the Middle East is driven by concern for Israel’s interests.”

* Michael Scheuer is a historian and former CIA analyst. For three years, he headed the Osama bin Laden tracking Unit at the CIA’s Counterterrorism Center. He is author of the book Imperial Hubris. In 2007, bin Laden said Scheuer’s book revealed the reasons behind U.S. losses in the War on Terrorism.