Imagine for a minute what the reaction of Jewish Supremacist organizations such as the ADL, the SPLC, the B’nai B’rith and a host of others, would be if a European American community dug a “separation ditch” between their part of town and a Jewish suburb in order to stop Jews entering their territory.

If any group–black, white, Hispanics–whoever–dared to do such a thing to Jews, there would be all hell to pay. The ADL would be screaming “racism”, the SPLC would be in court, and the B’nai B’rith would be using its tribalists who control the mass media to slander, smear and attack–and to incite government intervention to stop this “racist outrage.”

Of course, there has never been anything as extreme as a “seperation ditch” between Jews and non-Jews in America—but there is one, right now, newly built—in Israel! 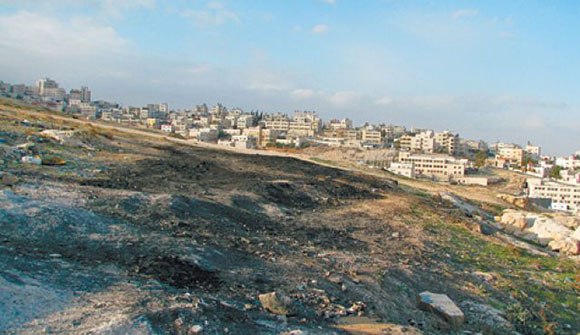 According to an article in the Israeli Haaretz newspaper, the Jerusalem municipality has this week “dug a separation ditch between Jewish and Palestinian neighborhoods of Jerusalem as a security measure after repeated complaints of violence against Jewish residents.”

The article, which will never be reproduced in any of the Jewish Supremacist controlled media directed at Gentiles, goes on to say that “Neighbors and city officials say physical separation between the French Hill neighborhood and the Palestinian village of Isawiyah in East Jerusalem is an appropriate deterrent against crime and terror attacks.

“Personal safety in the French Hill neighborhood has in recent weeks become a central issue in the race for Jerusalem municipal office.

“A number of parties have criticized the municipality and Mayor Nir Barkat, for failing to provide residents protection from acts of terrorism such as firebombing and criminally motivated burglaries and car theft, believed to originate in adjacent Isawiyah.

“Female students living in the neighborhood have also complained of sexual harassment by Palestinians. ‘We have a real problem. There is no physical separation and the level of hostility is very high,’ said Avner Blankstein, a member of the board of the French Hill Community Council.

“City officials have coordinated with police to implement several security measures such as new security cameras and increased street lighting. The city has also allocated a budget to set up a neighborhood patrol.

“This week the city stepped up efforts further. Jerusalem City Manager Yossi Hyman had proposed deepening an existing ditch between Nahagei HaPradot Street and Isawiyah. In recent days the ditch was dug. It stretches for a few hundred meters, and the earth removed has been used to build an embankment besides the ditch. The goal of the ditch is to block entrance for off-road vehicles and cars from the village to the neighborhood, Blankstein said.”

So there you have it: Jews can demand extreme segregation from non-Jews—and they will be supported and even encouraged by the Israeli government.

However, if anyone else on earth dared to do that to Jews, those same Supremacist fanatics would be screaming “racist” from the rooftops.

Once again, it is one rule for the Jews, another for the Goyim.