Anyone seeking proof that Jewish Supremacists have turned the events of World War II into part of their religion and culture need look no further than the latest outburst by French Jewish Supremacist and parliamentarian Meyer Habib, who has threatened the world with war and invoked the 1938 Munich Conference over the ongoing Iran nuclear negotiations.

Habib, who represents “French citizens living in Israel” in the French National Assembly in Paris, was speaking during a Knesset session dealing with Israeli-European issues. 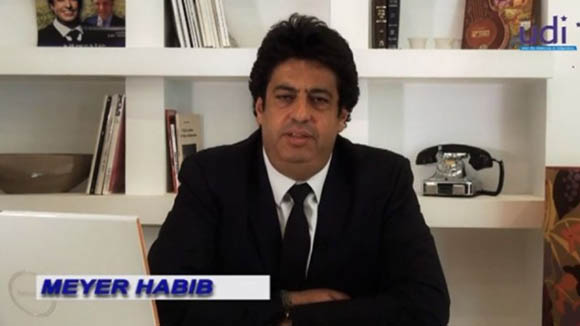 Habib said he had contacted French Foreign Minister Laurent Fabius last week to warn him that Israel would launch a military strike if necessary to forestall an Iranian nuclear weapon.

“I call on all Europeans and want to remind them of the agreement between [prewar French prime minister Édouard] Daladier and [prewar British prime minister Neville] Chamberlain,” Habib said, referring to the 1938 Munich agreement—which, ironically, prevented the outbreak of war, contrary to the Jewish Supremacist interpretation of history.

Habib went on to threaten the world with war: “I want Europe to understand that it’s in its interest to prevent a war,” he said.

“I told [Fabius on Thursday] that I know Israel will not accept a nuclear Iran [because] it would mean the destruction of the State of Israel. And if they [the P5+1 nations] want to prevent a war, they shouldn’t sign the agreement.”

Fabius “understood that,” he added. The French foreign minister was widely reported to have scuppered the emerging deal late Saturday, leading to the halting of the negotiations with Iran, and an agreement to reconvene on November 20.

The outburst reveals much about the psychology of Jewish Supremacism. Firstly, it shows the absolute obsession with the events of World War II, and how that 70-year old conflict has been embedded into the Jewish psyche.

The desire to start a war against Iran in the face of united worldwide opposition is a clear indication that the Jewish Supremacists actually believe that they know better than all the world’s goyim put together.

Habib’s outburst shows once again that there will never be peace until the power of real enemy of world harmony—Jewish Supremacism—is broken.

Next Post Jewish Lobby in Poland Blackmails Forbes into Apology