Huge fires set across Baltimore as Freddie Gray rioters torch city, loot stores and injure fifteen police officers as violence rages into the night and local politicians are left turning on each other

By MIA DE GRAAF FOR DAILYMAIL.COM

A state of emergency has been declared in Baltimore after the city transformed into ‘an absolute war zone’ following the funeral of Freddie Gray.

More than 1,000 Maryland police officers, the Maryland National Guard, and 5,000 officers from neighboring states are on standby in the city and the president has been briefed on the situation as violence continues to escalate. It is the same level of reinforcement the city requested during the riots of 1968 after Martin Luther King Jr was assassinated.

The scenes of destruction were initially billed as anti-police protests to avenge the death of Freddie Gray, who suffered a fatal spinal cord injury in police custody on April 12.

But it rapidly mushroomed into uncontrolled riots.

Troops descend on Baltimore after riots

National Guardsmen called up to restore peace, curfew instated overnight after mass riots spread out across city in wake of funeral of black man who died in police custody. National Guardsmen took up positions across Baltimore and hundreds of volunteers began sweeping the streets of broken glass and other debris Tuesday, the morning after riots erupted following the funeral of a black man who died in police custody.

The streets were calm in the morning, but authorities remained on edge against the possibility of another outbreak of looting and arson. The city was under a 10 pm-to-5 am curfew, all public schools were closed, and the Baltimore Orioles canceled their Tuesday night game.”We’re not going to leave the city unprotected,” Maryland Gov. Larry Hogan vowed during a visit to a West Baltimore intersection where cars were burned and windows smashed the night before.
Click here for the full story 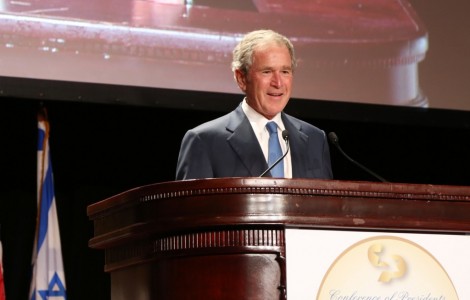 We covered this week’s Republican Jewish Coalition conference in Las Vegas, and noted that only one session was on the record.

Jews do dish though, and we also got the skinny on former President George W. Bush’s off the record speech to the crowd and his veiled digs at President Barack Obama’s Iran and Iraq policies.

Now Rabbi Shmuley Boteach, who was in attendance, throws up his arms and says, if someone’s gonna leak some of the content to the New York Times, I may as well give it all up.

Turns out, Ari Fleischer, Bush’s former spokesman, pitched his ex-boss a tough question during the session, asking Bush whether he regretted saying he could see into Russian President Vladimir Putin’s soul.
Click here for the full story

The Iranian Navy has reportedly seized a Marshall Islands-flagged ship with 24 crew members on board. It was previously reported by media that it was a US vessel, though the Pentagon denied those claims.

The navy seized the Maersk Tigris under court order at the request of Iran’s Ports and Maritime Organization, Fars news agency reported.

“The ship was seized after a relevant court order was issued for its confiscation,” Fars quoted a source as saying.
Click here for the full story

The protest Tuesday in Rabin Square was organized by the Higher Arab Monitoring Committee and followed a daylong general strike in the Arab sector.

“This is one of the most painful issues for the Arab public,” said Ayman Odeh, the head of the Joint Arab List party in a statement released shortly before the rally, the French news agency AFP reported. “For a family that loses its home that was built on private land, its whole world is destroyed.”

The Joint Arab List received the third most votes of any party in Israel’s March 17 elections.
Click here for the full story

MOSCOW (JTA) – Facebook has taken down dozens of pages containing a Russian-language phrase that combines a Ukrainian pejorative for “Jew” with the name of a nationalist whose troops murdered Jews.

Pages with the phrase “Zhidbanderovets” were removed on April 22 after Facebook said they violated the social network’s community standards against offensive speech, according to a report on the news website evreiskiy.kiev.ua.

More than 1,000 people complained about the phrase, according to the report.

The phrase means “Yid-Banderite”: “Banderite” refers to an admirer of the late Ukrainian nationalist figure Stepan Bandera, who fought alongside, and later against, the Nazis in the 1940s and whose troops massacred Ukrainian Jews. Bandera and his troops hoped the Nazis would allow them to gain independence from Russia.
Click here for the full story

The Ukrainian National Guard has been put on high alert due to worsening forest fires around the crippled Chernobyl nuclear power plant, according to Ukraine Interior Minister Arsen Avakov.

“The forest fire situation around the Chernobyl power plant has worsened,” a statement on Avakov’s Facebook page says.

“The forest fire is heading in the direction of Chernobyl’s installations. Treetop flames and strong gusts of wind have created a real danger of the fire spreading to an area within 20 kilometers of the power plant. There are about 400 hectares [988 acres] of forests in the endangered area.”
Click here for the full story

Previous Post Dr. Duke gives incredible talk on human history and what each of us can do for a better future