As US “aid” to Israel now reaches well over $3 billion per year, American taxpayers will be interested to know that at least a third of that money–$1 billion—will be spent by the Israeli government on “strengthening the Jewish identity of Diaspora Jews” all over the world. 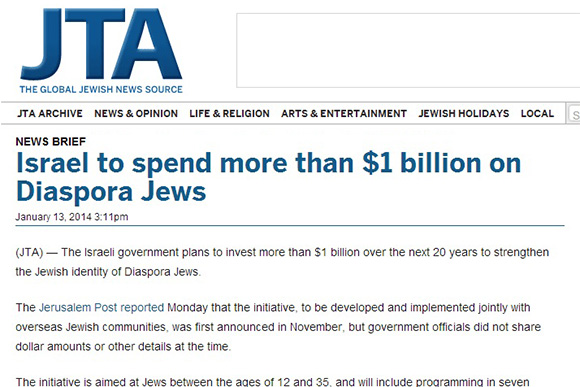 According to the Jewish Telegraphic Agency, the Jerusalem Post reported that the “initiative, to be developed and implemented jointly with overseas Jewish communities, was first announced in November, but government officials did not share dollar amounts or other details at the time.

“The initiative,” the JTA continued, “is aimed at Jews between the ages of 12 and 35, and will include programming in seven content areas: immersive experiences; follow-up; Israel and peoplehood education in formal institutions and informal settings; serving ‘the global good’; Jewish life and Israel engagement on campuses; and the immigration of young professionals.”

“Among the ideas being considered are a world Jewish peace corps; Hebrew-language courses in public schools in cities with large Jewish populations; the expansion of Birthright-like programs to younger age groups; and increasing financial support for Jewish summer camps.”

Charles Bronfman, a main sponsor of the $210 million “Birthright Israel,” an organization specifically committed to preventing inter-marriage between Jews and Gentiles, expressed the need to preserve the Jewish genetic character as expressed in the Jewish DNA. Bronfman is brother of Edgar Bronfman, Sr., president of the World Jewish Congress. He said,

“…you’re losing a lot — losing the kind of feeling you have when you know [that] throughout the world there are people who somehow or other have the same kind of DNA that you have.”85

The Zionist Supremacists have not indicated out of which budget the $1 billion is to be allocated– but no matter which government department gives the cash, the reality is that the US taxpayers give over $3 billion per year to the Israeli government.

To add insult to injury, they are also going to use this money to pay fellow Jewish Supremacists to immigrate to Israel, a country which actively outlaws any immigration apart from those confirmed to be racially of Jewish descent.

Imagine for a second if any nation on earth—European, African or Asian—were to take billions of dollars of aid from other countries, and then lavish a third of it on promoting European-only, Asian-only or African-only, racial “identity”?

These same Jewish Supremacists would be screaming “racist” and hurling every sort of epithet known to their tribalist media controllers against any nation which dared to spend someone else’s money on promoting their own racial interests—and specifically excluding Jews.

As usual, it is one rule for Jewish Supremacists, and another rule for everyone else—and also it is everyone else who has to pay for this as well.

Next Post Disagreement should not mean division: The Divide-and-Conquer Strategy Explained in Detail