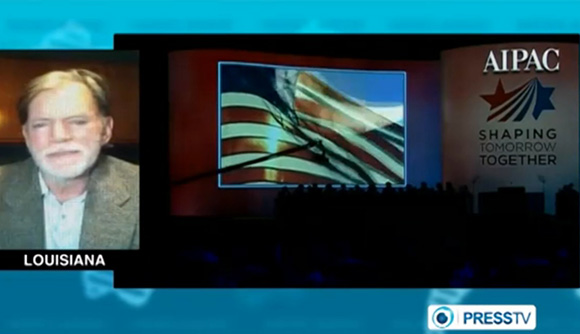 Interviewed on the topic of AIPAC, the Jewish lobby and Jewish dissenters, Dr. Duke said that the Jewish Supremacists control America “by controlling campaign financing and basically because of the power in the media.

The full transcript follows below:

Press TV has interviewed Dr. David Duke, former member of US House of Representatives, Louisiana about the influence of Israel on American policy and how Zionism influences media, banking and politics.

What follows is an approximate transcript of the interview.

Press TV: First of all I’d like to get your thoughts on the AIPAC’s efforts to implement more sanctions on Iran and also the significance that a US Rabbi is criticizing AIPAC for what he calls their strong-arming tactics.

Obviously AIPAC is an organization that is a Zionist organization that’s working for the interest of Israel and for the radical Jews who control the Jewish community in America. There are a few dissenting Jews, which we should be very happy for and I’m glad there are some Jews there to challenge some issues.

But every major Jewish organization in the United State of America is pushing for war and sanctions against your country (Iran) when the true nuclear rogue state of course is Israel and Israel is a real threat to world peace.

It’s just insane… the American intelligence community in fact we did a national intelligence estimate of leading intelligence organizations in the United States of America: the CIA, all the national security agencies, organizations in our country and they themselves looked at the evidence and said that Iran has no program for building a nuclear weapon whatsoever. So, why do we have sanctions? The state that should be sanctioned is Israel.

I document this by the way on my website davidduke.com and we have the evidence and the documents on this that are fully available for anyone around the world to read.

Press TV: I’m curious about how the dynamics work in this issue. I’d like you to explain it for us and our viewers – The members in the Congress and the Senators, do they agree with AIPAC’s allegations? Do they choose to ignore the facts, or are they all just on board? And how far are AIPAC and those pro-Israeli lobbies willing to go with regards to Iran?

Duke: You have to remember and this is the key element for anybody around the world… Zionism is not simply like the Jewish state in Israel or Netanyahu and a few of these other radicals in Israel forming many of these policies and a few other Jewish groups around the world supporting them. This is worldwide.

There is simply not one American Congressman truly willing to stand up to the Zionists in this country. They have been bought off. It’s the best Congress money can buy and it’s shameful to the American people.

As an American I’m ashamed at the fact that our politicians have so sold out the interests of really the American people and of course human rights and freedoms.

Press TV: How can this status quo change, for example, what you said about US Senator not daring to stand up against the Israeli lobbies. What can be done to bring about change?

Duke: With a change of consensus. And that’s why people have to learn about Zionism and I think the people of the Middle East and other regions of the world including Iran has got to work very hard to explain to people that the Palestinian problem and the Zionist problems go far beyond the relationship between Israel and the Palestinians, Israel and Lebanon, Israel and Syria, Israel and Iran.

It is a worldwide problem. And the control of the media and the control of the political processes around the world, they are behind what we call globalism, which is really an effort toward world government; towards a…extremist Messianic vision of the world. Now, that might sound radical and strange.

But Ben Gurion himself said that Israel would become the Supreme Court of mankind; that all nations and armies would be abolished…It’s talking about world domination.

And they really do dominate the world in many ways, in media, in international banking and in politics.

And by controlling America they control a great deal of the military force of the world.

So unless you educate people on this issue around the world and change the consensus we cannot change the political process. In doing this we begin to change everything and I believe we’re doing that everyday…”