By Dr. Patrick Slattery — As I have expressed numerous times on our radio shows, I learned from Dr. Duke the critical importance of the Jewish supremacist strategy of divide and conquer in their quest for global racial supremacy.

This divide and conquer strategy has many manifestations, from massive immigration to hyper-polarized media debate on “hot button” issues. Another facet of it is the encouragement of strife and division within the ranks of those who would oppose Jewish extremists.

For decades black leaders have been heavily pressured to denounce Minister Louis Farrakhan. More recently within the Palestinian solidarity movement there have been efforts to repudiate and isolate Gilad Atzmon. Even some anti-Zionist Christian leaders have not been immune to turning on other leaders within the freedom movement for perceived or imagined transgressions, thus sacrificing the unity necessary to combat those who commit the greatest transgressions of all. 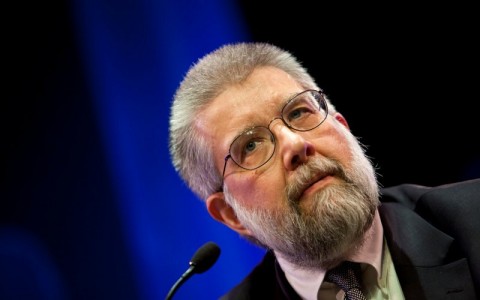 Now I see the makings of a new effort to divide us while the Jewish supremacists continue their global conquest. This week on Dr. Duke’s radio program and website I reported on former CIA analyst and Georgetown University Professor Michael Scheuer’s courageous confrontation with a Congressional Committee in which he literally called their bullsh** on Israel being a strategic asset to the United States.

Now I find Professor Scheuer being called out by the Ziomedia for a statement he has made that I would not agree with. Namely, he seems to have implied in an interview with the Georgetown University newspaper that if all other efforts to throw off tyrannical government fail, then there should be a violent revolution and perhaps even an assassination of the President.

Obviously, to me non-violence in a moral absolute, and it is something that Dr. Duke has emphasized and embodied throughout his career as a political leader. Moreover, I am thoroughly convinced that violence is unnecessary and counter-productive.

So the question now is how to handle Professor Scheuer. Do we denounce him and declare him persona non grata in our movement, as suggested by Zionist columnist for the Daily Beast, David Frum. Frum states:

“Partisans are seldom over-squeamish about their choice of allies. “He may be a crank/crook/bigot, but he’s an effective crank/crook/bigot”—is a line of reasoning that would have been as familiar to James Monroe as to any modern politician… Instead of arguing over whose hands are dirtier, maybe it’s time to begin to worry about how all our hands might begin to be cleansed.”

If Professor Scheuer was actually suggesting we launch a bloody revolution or that someone assassinate Obama, I would be the first to repudiate him. However, to Scheuer, the resort to violence comes only after all other options have been exhausted, including elections, protests, withholding taxes, and other non-violent resistance.

The argument I would make to Professor Scheuer is that once enough of we the people awaken and see things clearly, elections and other non-violent methods will easily achieve our liberations. We as a people have overwhelming numbers, abilities, and resources, and all that is needed is an awakening. Our Zio-rulers have taken power by deceiving and co-opting our people to be complicit and complacent so that our strength is at their disposal — i.e. our taxes are sent to Israel, our young people fight their wars, our savings are put in their banks, etc. As long as the bulk of our people are following the Zio-leaders, a violent revolution by the awakened few would be doomed to an ignoble defeat, with countless innocent lives lost and wasted in the process.

That having been said, the argument I would make to David Frum is that I will argue whose hands are dirtier. Professor Scheuer’s endorsement of political violence is theoretical and refers to a time and situation that has not yet arisen. David Frum is the Jewish-Canadian speechwriter for George Bush who coined the term “Axis of Evil” and who, along with his fellow Zionist Neocons, successfully launched a needless war for Israel against Iraq that cost a million Iraqi lives and left thousands of our self-sacrificing soldiers dead and countless more disabled and scarred for life. No wonder Frum does not want us asking whose hands are dirtier!

Again, I call on Professor Scheuer to understand the moral and strategic superiority of non-violence, but regardless, whenever the courageous Professor Scheuer says something that would be of interest to our readers I intend to pass it on.

Next Post “Academic Diversity?” Not for Jewish Supremacists or in Racist Israel!