By Dr. Patrick Slattery — At Donald Trump’s press conference today, he surprised the Zio media by reiterating his original assertion that there were “problems on many sides” in Charlottesville last weekend. Obviously, we do not agree that any fault lay with the organizers of the “Unite the Right” rally nor with the groups that came to support the rally. But with the media whipping up hysteria over the fatal car crash involving James Alex Fields before the circumstances surrounding the event are even clear, the best we can really hope for is a false equivalence at this point.

It took a great deal of courage for Donald Trump to condemn the violence perpetrated by what he called the “Alt-left” (certainly the Antifa, but there were also violent elements in BLM, etc.). Please note that the Alt-right attendees brought defensive gear like helmets and shields, while the media’s darling “counter protesters” brought cement-filled bottles, flame throwers, hydrochloric acid (which they used to apparently permanently blind one of the Alt-right speakers), urine, feces, used tampons, and used condoms. The latter few items may seem like jokes, but anyone who has worked in the health care industry can tell you that these can spread HIV and other serious diseases. These are serious chemical and biological weapons, and the Alt-right brought their helmets and shields because the violent leftists have been using these methods of attack for some time now.

President Trump also showed tremendous courage in pointing out they are attacking Robert E. Lee today, but tomorrow it could be George Washington and Thomas Jefferson. Actually, with the NFL season about to begin, next in line is probably the national anthem. The Star Spangled Banner was written about a battle in the War of 1812, which had nothing to do with slavery or the Holocaust® any other hot-button PC issues. What makes it objectionable is that it is from an era before multi-culturalism, before Zionist domination of our country. What do they propose replacing it with, one of Nikki Minaj’s award winning songs?

When Donald Trump read a prepared statement condemning the straw men of the KKK and white supremacists, Dr. Duke and others warned that it would never be enough to satisfy the Zio mouthpieces in the media. And it wasn’t. CNN interrupted its 24/7 coverage of Russia’s make-believe election hacking to inform viewers that the President’s prepared statements specifically calling out mythological white racism was too little too late.

So today it was with great pleasure that I turned on CNN’s Erin Burnett Show for a dose of the host’s usual vacuous indignation, only to hear her ask if the last person in America who supports Donald Trump is David Duke. Then it was more of KKK this and white supremacist that. 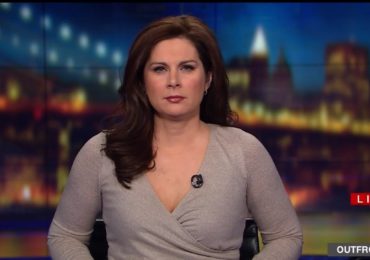 The question I have is what do they mean by white supremacist? According to Wikipedia, “White supremacy or white supremacism is a racist ideology based upon the belief that white people are superior in many ways to people of other races and that therefore white people should be dominant over other races.” I don’t know of any of the planned speakers at the rally who want white people to be dominant over other races. As for “being superior in many ways,” Dr. Duke acknowledged in his books that, on average, blacks run faster than whites, east Asians score somewhat higher on IQ test, and so on. Yet, he is proud of the incredible achievements whites have had in science, culture, etc. Is there something wrong with that?

The irony, of course, is that Erin Burnett and most of the rest of the mainstream media work for bosses that do adhere to a racist ideology: Jewish supremacism. Their tribal religion proclaims them to be God’s chosen people, and even those who are non-believers in God still have a strong tendency to behave ethnocentrically in order to build and maintain domination over all other races. We see it in the media. We see it in banking and the Federal Reserve. We see it in campaign finance that has turned the politicians of both major parties into scared little minions. And we see it in academia, where non-Jewish whites are vastly underrepresented in elite universities relative to both their merit and their population.

And there is something wrong with that. I don’t expect Erin Burnett or any other highly paid anti-white propagandist in the Zio media to ever admit it. But I am very heartened that Donald Trump seems to get it.

Previous Post Why Charlottesville was a huge victory and redpilll for millions of white Americans!

Next Post Dr. Duke Exposes the Media Lies about Who he really is and What he Advocates