Even though Jews are overrepresented by a factor of over 300% in the US Congress and 500% in the Senate—hysterical reports have surfaced in media which Jewish Supremacists reserve for themselves claiming that ‘Jewish influence over the US government is declining.’ 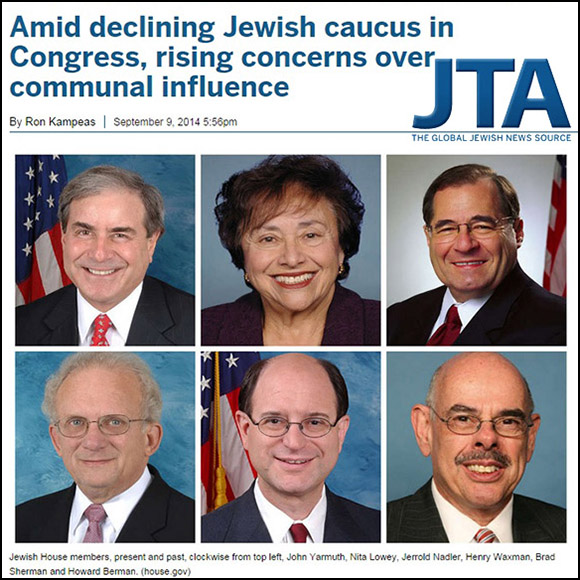 The reports—started by the Jewish Telegraphic Agency (JTA) and picked up by the Times of Israel—but of course ignored in the media which the Jewish Supremacists direct for consumption by the non-Jewish American population—claimed that a predicted reduction in the number of Jews in Congress after the January 2015 elections have “raised fears” of declining Jewish influence.

The chutzpah of even making this claim is so outrageous that it is guaranteed that the report will not make any of the media aimed at non-Jews.

What makes the story even more bizarre is that its central proposition is undermined by the Jewish House members contacted by the JTA, and quoted in the story:

Rep. Brad Sherman (D-Calif.), one of the lead Israel champions in the House, said support for Israel was undiminished. He noted the overwhelming vote last month to add $225 million to existing funding for Iron Dome, the anti-missile system that protected Israelis during the recent Israel-Hamas war in the Gaza Strip.

“Look at the Iron Dome vote,” he said. “Four Republicans and four Democrats voted against. Support for Israel is at a very high level.”

Sherman’s quote underlines the point: even though there are currently 31 Jews out of the 435 seats in Congress (7% of the seats, or over 300% proportionally higher than the 2% total Jewish population of the US), and 10 Jews out of the 100 Senators, (a 500% proportionality disproportion) the Jewish Lobby’s ability to influence the US government does not depend on how many Jews there in Congress.

Jewish power is a much deeper and embedded issue which starts with the American Israel Political Action Committee (AIPAC) and then stretches back into the Jewish Supremacist control of major campaign funding, control of the banking system, and control of the major “US” media corporations.

A recent report in The New Yorker magazine even said that AIPAC completely controls Congress through its ability to fund the campaigns of all would-be Congressmen and Senators—from both parties.

The New Yorker boasted that an AIPAC reception during its annual policy conference draws most congressmen and senators than any other government meeting except a joint session of Congress or a State of Union address:

AIPAC is prideful about its influence. Its promotional literature points out that a reception during its annual policy conference, in Washington, “will be attended by more members of Congress than almost any other event, except for a joint session of Congress or a State of the Union address.”

The Jewish media—the JTA and the Times of Israel in particular—know very well of this ability by the Jewish lobby to control Congress—in fact, this is how they have been doing it for decades.

Why then now produce articles like the one illustrated above suggesting that Jewish power is “declining”?
There are two reasons for reports such as these.

Firstly, the Jews-only media and the Jewish lobby understand that their Jews-only racist tribalist state of Israel has come under increasing international condemnation because of the Internet’s ability to show what their media suppresses—the brutal, racist and murderous nature of Israel and Zionist Supremacism.

Secondly, the Jewish lobby understands that this increasing exposure of the true racist, Gentile-hating nature of Jewish Supremacism has brought about a reaction against them in the general public.

These two factors have forced the Jewish lobby onto the defensive, and the first step in regaining the offensive is to once again generate complete Jewish unity.

There is no better way to create Jewish unity by raising the twin bogeymen of “declining Jewish power” while simultaneously promoting the idea that all Gentiles “hate Jews.”

The latter tactic has already been implemented (see the ADL’s recent “report” which claimed that a “billion people” are anti-Semitic!).

The spreading of a panic story among Jews only that they are “losing power” over the US government forms the second part of the tactic to once again corral Jews into a unified bloc against non-Jews.

Fortunately for the world, the Internet will once again undermine these efforts.