“The Simon Wiesenthal Center is a global human rights organization researching the Holocaust and hate in a historic and contemporary context. The Center confronts anti-Semitism, hate and terrorism, promotes human rights and dignity, stands with Israel, defends the safety of Jews worldwide, and teaches the lessons of the Holocaust for future generations. With a constituency of over 400,000 households in the United States, it is accredited as an NGO at international organizations including the United Nations, UNESCO, OSCE, Organization of American States (OAS), the Latin American Parliament (PARLATINO) and the Council of Europe.”

So what does that short paragraph really say. First of all, that it is a “global human rights organization.” It is truly global, with headquarters in Los Angeles and offices in New York, Toronto, Miami, Chicago, Paris, Buenos Aires, and Jerusalem. In addition, it has operatives all over the world who keep an eye out for any publications or news articles that need to be censored. Now, as for the claim of being for “human rights,” that is more problematic. 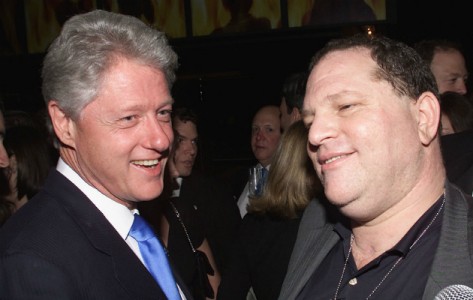 After all, a look at the rest of the paragraph betrays the fact that it is really concerned only with the interests of Jews. It “researches the Holocaust,” it “confronts anti-Semitism,” it “stands with Israel,” it “defends the safety of Jews worldwide,” and it “teaches the lessons of the Holocaust.” Those are all Jewish-centric endeavors. Moreover, when the more generic terms of “hate” and “terrorism” are used, you know that they are not referring to the Jewish hatred aimed at the goyim or the massive state terrorism of Israel.

So, the term “global human rights organization” clearly does not apply. A better description of the Simon Wiesenthal Center would be “global censorship and propaganda organ dedicated to stifling any discussion of Jewish power.”

With this better understanding of what the Simon Wiesenthan Center is all about, then the granting of its Humanitarian Award to Harvey Weinstein, whose films have such “humanitarian” themes as the torture killings of POWs (Inglorious Basterds) and the bounty killing of white people in 19th Century America (Django Unchained).

Weinstein’s acceptance speech continued in this “humanitarian” vein, as he called on Jews to rally against their “anti-Semite” enemies. “We better stand up and kick these guys in the ass,” he said. “We’re gonna have to get as organized as the mafia,” he continued. “We just can’t take it anymore [from] these crazy bastards.”

Weinstein was introduced by fellow Jewish movie mogul Jeffrey Katzenberg and by Christoph Waltz, who protrayed a German soldier in Inglourious Basterds. Weinstein said to hearty applause, “Too bad movies can’t all be like Inglourious Basterds, where Hitler gets what he deserves.” Come to think of it, a pretty big share of Hollywood movies ARE like that. In fact, Weinstein himself has handled the distribution of a great number of films connected to Jews, Nazis and/or the Holocaust, not just Basterds, but also The Truce, Life Is Beautiful, The Reader, Sarah’s Key, Captain Corelli’s Mandolin, The Imitation Game and the upcoming Woman in Gold. These are all films meant to build sympathy for Jews. Meanwhile, any discussion of the victims of Zionist and Communist Jews is suppressed by the Wiesenthal Center global censors.

The award was given at a gala fundraiser, that raised well over $50 million, perhaps close to $100 million for this “human rights organization.” Ten million came from convicted fellon Michael Milken, the Junk Bond King-turned-“philanthropist.” Remember, his “charitable gift” to the Wiesenthal Center not only helps preserve Jewish Supremacy, but it’s also tax deductible. Now there is a win-win situation!

Weinstein continued, “I’m upset when I read The Atlantic Monthly’s headline that says, ‘Should the Jews leave Europe?’ — a resounding ‘no’ on my end — and [New York Times columnist] David Brooks today talking about how to combat anti-Semitism,” Weinstein said that Jews “have to go and protect ourselves…. We just can’t take it anymore. We just can’t take these things. There’s gotta be a way to fight back.”

Weinstein’s speech, his mindset, his career, and the fact that he is the recipient of a “humanitarian award” from the massively endowed Jewish “human rights organization” says so much about where we are and how we got here. Jews have created this narrative of massive, irrational, and completely unprovoked victimization by the goyim. Because of the volume of propaganda put out by Weinstein and other Jewish moguls and because of the suppression of any discussion of Jewish crimes by the Simon Wiesenthal Center, the ADL, and other censors, the Jews have come to believe this false narrative.

With a warped historical perspective, they then become completely paranoid about the intentions of the goyim and ruthless in the face of imagined threats. They then rally together to seize increasingly more power from goyim in American and Europe and use unspeakable violence against goyim in Gaza and the rest of the Middle East. Any resistance to their actions is labeled “anti-Semitism” and only further feeds into their paranoid delusions and their power grabs.

The good news is that we goyim can put an end to this madness simply by waking up and ceasing to assist the Jewish supremacist power structure in our own repression. But that awakening won’t happen automatically, and time is running short.