By Dr. Patrick Slattery — CNN has anointed oligarch Petro Poroshenko, whose empire includes a confectionary business, Ukraine’s new president after Poroshenko claimed 56% of the vote in Sunday’s election. The Jewish Daily Forward newspaper has indicated that Poroshenko is at least half Jewish, and it now seems that Ukraine will get a Jewish president to go along with the its Jewish prime minister, Arseniy Yatsenyuk. 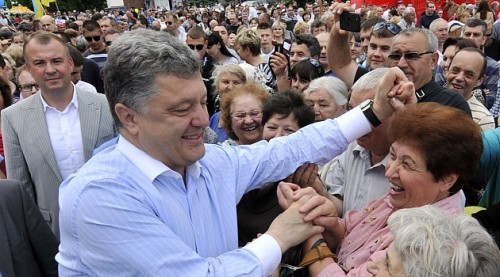 This all seems a strange turn of events for a country that just went through a violent “revolution” with muscle-power supplied by elements described by both Russian and American leaders as neo-Nazi. While Svoboda and Right Sector street fighters may be the engine of this revolution, the steering wheel appears to be in the hands of U.S. Assistant Secretary of State Victoria Nuland and other Jewish tribalists.

It should be no surprise that in a country that suffered a man-made famine at the hands of Jewish Bolsheviks, both Poroshenko and Yatsenyuk try to hide their Jewish heritage. According to the Jewish Daily Forward article “Ukraine Presidential Frontrunner Petro Poroshenko and His Secret Jewish Roots: Chocolate King’s’ Father Was Jew Who Took Wife’s Name,” Poroshenko’s spokeswoman asked Forbes Israel to remove her boss’ name from a list of the world’s richest Jews.

Similarly, Yatsenyuk tries to pass himself off as pure Ukrainian. However, Oxford Analytica back in 2009 stated that Yatsunyuk was “[b]orn in Chernivtsi in 1974 to Jewish-Ukrainian parents.” (Oxford Analytica, founded in 1975, is “an independent strategic-consulting firm drawing on a network of more than 1,000 scholar experts at Oxford and other leading universities and research institutions around the world.)

Moreover, in October 2009, Israel’s Haaretz Newspaper carried an article describing efforts by Ukrainian Jewish leaders to get Yatsenyuk to declare his Jewish heritage”

Iranian President Mahmoud Ahmadinejad apparently is not Jewish, but there’s a chance the candidate for the presidency in Ukraine elections in January 2010, Arseny Petrovich Yatsenyuk, is a Jew after all.

About three weeks ago Yuri Dubinsky, wearing a black skullcap, appeared on TV, introducing himself as the chairman of the Jewish community of Kharkov. Apparently this is a matter of controversy, but Dubinsky declared he was speaking not only in the name of all the Jews of Kharkov, and not just in the name of all the Jews of Ukraine, but for the entire Jewish people. He does not belong to any party, he said, but will support Yatsenyuk because of his Jewish origin.

In the name of the Jewish people he demanded the candidate not be ashamed and declare himself a proud Jew. Not only is his mother a scion of the ancient family whose members “wrote the Talmud,” but his wife, Tereza, is the scion of the glorious Gur dynasty, which includes Israel’s foreign minister.

Followers of the Lubavitcher Rebbe also published a long letter condemning Yatsenyuk for denying his Jewishness.

I don’t know how Svoboda and the Right Sector will react to their revolution being hijacked by Jewish tribalists, but I have the feeling that Ukraine will remain in the headlines for some time to come.

Next Post European Elections: A Small Step Forward to Saving the World from Jewish Supremacism