By Dr. Patrick Slattery — Dr. Duke recently made the point that Jewish activists in prior decades were ready to rally against, and even violently fight against, South African apartheid while turning a blind eye towards the even greater injustices their ethnic brethren in Israel were (and still are) inflicting on the Palestinians.

In the same way, the Jewish supremacists in Hollywood have put out decades of fictionalized accounts of WASP racism and ethnic snobbery, from “Guess Who’s Coming to Dinner” to countless summer teen movies. Yet they fail to take on the very real racism within their own community.

Over the past week we have been discussing on the David Duke show the uproar in Israel over revelations that Israeli PM Netenyahu’s son is dating a gentile girl from Norway. Netenyahu’s brother-in-law has pledged to keep the son away from his grandfather’s grave, who obviously posthumously irate. The Israeli press is full of editorials voicing similar sentiments. 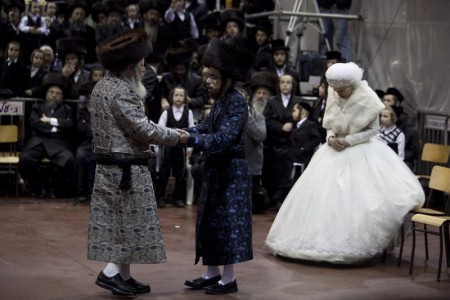 This aversion to marriage outside the tribe is not limited to Israel. In the past year I had a Jewish acquaintance recount to me without batting an eye that his brother had completely disowned his niece for dating a gentile boy, despite the niece’s alleged list of achievements including a perfect 1600 SAT score.

Could Jewish supremacists be so fanatically committed to their tribe that it would take priority over the well-being of their own progeny? Consider this excerpt from an article by John C.P. Goldberg and Robert H. Sitkoff, two Jewish Harvard Law School professors hired by Elana Kagan:

“The breadth of freedom of disposition under American law, in particular the absence of a right in the decedent’s children or other blood relatives to inherit, is unique among modern legal systems. A classic teaching example is Shapira v. Union National Bank. In that case, the court upheld a father’s bequest to his son that was conditioned on the son marrying within seven years “a Jewish girl whose both parents were Jewish.” The court emphasized the father’s right to “restrict a child’s inheritance,” even “entirely [to] disinherit his children.” The court regarded the son’s “right to receive property,” by contrast, as “a creature of the law” subordinate to the father’s freedom of disposition.”

To demonstrate that this case was not unique the also mentioned in the footnotes a 2009 case from the Illinois Supreme Court, Estate of Feinberg, in which a man stipulated in his will that for inheritance purposes any of his descendants who married non-Jew would be “deemed deceased for all purposes of this instrument as of the date of such marriage.” Goldberg and Sitkoff were entirely uncritical regarding both cases.

As for Hollywood, don’t hold your breath for it to produce a courtroom thriller based on either of these true stories. Love transcending the boundaries of race or class may be popular movie themes, but they have to portray the WASP as the one whose inborn prejudices must be overcome. You can count on hundreds more Nazi movies before Hollywood examines Jewish racism.

Next Post “Special Relationship is a One-Way Street” in Favor of Israel: Jewish Dissenter Professor