By Dr. Patrick Slattery — There is a lot of buzz in the media about the reported proposal that’s going to come from the Trump administration on DACA. There’s a lot of outrage over this reported compromise among anti-DACA people. Here is my take on it.

First of all, what is in the proposal? The headline is the expansion of DACA: a doubling of DACA adding maybe as many as a million potential extra DACA recipients. This comes from the fact that a million or so illegal aliens in the right age bracket failed to register for DACA, either because their were lazy, ignorant, or knew that they wouldn’t meet the requirements of having a high school diploma and a clear police record. Probably not so many have changed. 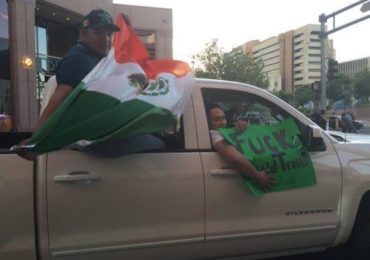 This DACA amnesty/expansion would be in exchange for an end to chain migration. This would be accomplished by effectively repealing the 1965 Immigration Act whereby 75% of the immigration is through “family reunification.” People could only sponsor their spouse and their dependent children. Currently, because you can sponsor your brother and he can then sponsor his wife and she can then sponsor her cousin and he his children… that’s the chain migration. You wouldn’t have chain migration under what is being proposed, at least not after the current backlog of cases moves through the system

Also, there would be an end to the diversity lottery and funding for the wall and other other measures. Of course, this is really just political theater. As generous as the offer is to the DACA people themselves, there is no way that the Democrats and the pro-immigration Republicans are going to sacrifice so much future immigration just to allow muh DACA kids to come out from the shadows.

This is obvious. Even a doubling of DACA is not good enough for them. As you know, I would prefer President Trump to make the argument that these people have no right to expect citizenship. I’d rather have him convince the American people that amnesty is wrong and that the immigration is a massive problem for us rather than pretending to go along with the narrative that these “kids who came here through no fault of their own” are so wonderful and deserve to stay. But his strength is not persuasion. It’s negotiation, or deal making.

I think if you looked at The Art of the Deal you would probably find this kind of strategy. He’s putting his opponents into in the position of rejecting not just a DACA amnesty but a DACA expansion. He is going them what they claim they want, but they’re not going to accept it. They are there even calling it white supremacy, and this is exposing them.

It shows that this is really about turning whites into a majority. Yes, of course Democratic politicians are thinking in terms of future voters and Republicans in terms of cheap labor, but we know that both parties are funded bigly by Jews, who have been pursuing a decades-old plan to turn American majority minority. Indeed, the rank and file of both parties have big anti-immigration constituencies– labor Democrats and traditional values Republicans, but neither of these contingents supply much in the way of campaign contributions, while the Jews do.

While the Trump proposal gives the appearance of cucking on DACA, it would end chain migration and the Diversity Visa lottery system, and what legal immigration would remain would be based on merit and not just being from random countries in Shitolia.

The Democrats and the pro-immigration Republicans won’t accept it. It exposes them. Trump knows they won’t accept it. But what if they accepted it? What if he miscalculated and they accepted it? Would this expanded DACA amnesty be be worth it? Actually. it would, and here’s why. My position is that trading DACA now for everything else that he’s talking about would actually be better than deporting all of DACA people now (which isn’t really even possible) and waiting a few years to get everything else. Because right now we’ve got legal immigration from Shitolia on the order of about a million per year, and it is way easier to keep people from entering in the first place than get them to leave once they are here. A bad deal now could be better then a good deal later.

So what we will be accepting legally in two or three years is going to be a lot more than DACA with amnesty. Also there’s the reality that that even if DACA is rescinded — which is actually what’s going to happen when Congress fails to pass a bill that Trump will sign — these DACA recipients aren’t all going to be deported. They aren’t all going to leave the country. Some of them will, but to a large extent these DACA people are water under the bridge.

So what Trump is doing is exposing the Democrats and Pro-immigration Republicans for really wanting to transform the population to replace the white majority. It’s going to be clearer and clearer that that’s what they want to do. This is going to put him in a stronger position to get these other things and to move public opinion to a more anti-immigration stance, especially once the current spending authorization expires on February 8.

I don’t think Trump is necessarily the 3-D chess master. I think Steve Miller probably has a lot to do with pointing out the the various values of this or that element of the deal. Either way, this DACA proposal is not going to pass. In a couple of weeks we will be facing another government shutdown and I think Trump will be in a stronger position by having offered this cuckish proposal.

Previous Post Why Mass Immigration is Racist Genocide of White People – DACA Amnesty is Death of For America!

Next Post Dr Duke and Candidate Paul Nehlen Expose the Zio Attack on Him & All of Us!