By Dr. Patrick Slattery — Predictably, President Trump’s speech to the United Nations contained plenty of belligerent and foolish statements that will get the headlines in the Zio media. The threats against North Korea and Venezuela will get a lot of attention, but what is really more significant is that there was only the most vague and indirect criticism of Russia (and also China), in stark contrast to the 2015 and 2016 UN addresses by President Obama. 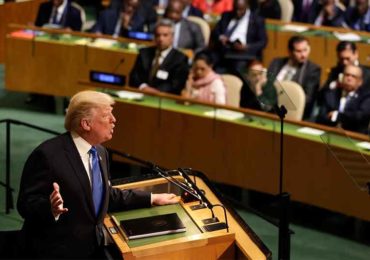 The only statement Trump made that was in the least bit critical of Russia or China was “We must reject threats to sovereignty, from the Ukraine to the South China Sea.” By contrast, in 2015 Obama said

“Consider Russia’s annexation of Crimea and further aggression in eastern Ukraine… [W]e cannot stand by when the sovereignty and territorial integrity of a nation is flagrantly violated. If that happens without consequence in Ukraine, it could happen to any nation gathered here today. That’s the basis of the sanctions that the United States and our partners impose on Russia.”

This is all the more significant because these Jews won’t let up with the Russian collusion hoax, and Trump’s generals are rattling sabres right on Russia’s borders.

Also let’s look at Syria. Trump has some harsh Zionist rhetoric, which seemed to please Netanyahu:

“We seek the de-escalation of the Syrian conflict, and a political solution that honors the will of the Syrian people. The actions of the criminal regime of Bashar al-Assad, including the use of chemical weapons against his own citizens — even innocent children — shock the conscience of every decent person. No society can be safe if banned chemical weapons are allowed to spread. That is why the United States carried out a missile strike on the airbase that launched the attack.”

But what was missing was Obama’s insistence in 2015 that Assad must leave power:

“Let’s remember how this started. Assad reacted to peaceful protests by escalating repression and killing that, in turn, created the environment for the current strife. And so Assad and his allies cannot simply pacify the broad majority of a population who have been brutalized by chemical weapons and indiscriminate bombing. Yes, realism dictates that compromise will be required to end the fighting and ultimately stamp out ISIL. But realism also requires a managed transition away from Assad and to a new leader, and an inclusive government that recognizes there must be an end to this chaos so that the Syrian people can begin to rebuild.”

Obama said nothing about the will of the Syrian people, which Trump and everyone else knows favors Assad. Obama called, as he had so many times before, for Assad to go.

It has been reported that Steve Miller wrote the speech. I cannot trust Miller, but I am willing to entertain the possibility that he may be trying to placate his fellow Jews with bellicose rhetoric against Iran and distract the media with immature name calling and over-the-top threats against Kim Jong-un’s North Korea, neither of which are really all that new in substance, if not style.

But he left Putin and Russia out of it. That was good. He also made welcome statements about handling refugees in near the countries of their origins, and regarding migrants, said

“[U]ncontrolled migration is deeply unfair to both the sending and the receiving countries.

For the sending countries, it reduces domestic pressure to pursue needed political and economic reform, and drains them of the human capital necessary to motivate and implement those reforms.

For the receiving countries, the substantial costs of uncontrolled migration are borne overwhelmingly by low-income citizens whose concerns are often ignored by both media and government..”

Plus there was an embrace of nationalism for all nations.

All in all, I thought the hostility towards North Korea, Venezuela, and Iran made it a pretty bad speech. Judging from Melania’s grimacing and John Kelly burying his head in his hand, I don’t think I was alone in this assessment. But I wouldn’t expect a good speech, given the foreign policy team he has surrounded himself with and the preferences of the deeply entrenched Deep State. 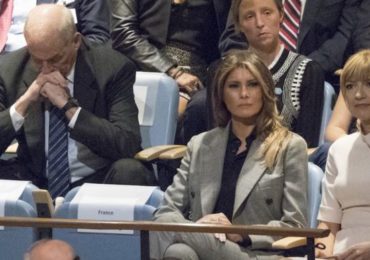 I don’t think the speech represents any kind of departure or turn for the worse. North Korea is perfectly able to endure name-calling. Kim is not suicidal, and I don’t get the feeling that Generals Mattis or Kelly, to say nothing of Rex Tillerson, are going to let Seoul burn. McMaster and Nikki Haley may be that foolish, but they are outranked.

The main thing is that Trump is withstanding pressure from these Jews to vilify Putin and Russia, at least for the time being…