Like a lot of us, I am not at all happy about this airstrike. But I am not ready to throw in the towel. My narrow area of expertise, such that it is, has to do with story—what makes a narrative work and what detracts from it, which character traits and plot twists will serve the storyline, how to tell the best possible tale so that it comes to life and resonates.

Typically, when folks around me were talking politics, my role would be that of the listener.  If I spoke, it would be to ask a question.  But that changed with this last election cycle and particularly in the wake of Trump’s inauguration.  I’m sure most will understand why.

Since the start of his presidency, Trump’s biggest, most immediate, and most formidable enemy has been the mainstream media.  Every day has been a red-hot battle of two differing narratives—the story that Trump is pushing vs. the one that the MSM is broadcasting.

There are lots of statesmen that can spin a good yarn.  That’s an essential part of a successful politician’s bag of tricks.  But the key word is “spin”.  Few in Washington have ever been able to do much more than that.  The MSM as it exists today has never stood opposite a president that could hold a candle to their Hollywood story-crafting skills the way that Trump can.

This is one of the reasons that the mainstream media hates Trump so much: he does more than spin—he’s a politician who can write his own scripts.  The immigration problem wasn’t a thing until Trump came along.  Skewed trade treaties weren’t talked about before Trump made them an issue.  The Russians were the bad guys by default until Trump came along with some inspired counter casting and people began to realize it didn’t have to be.

Obama was usually a good boy, but the media skewered him when he was bad.  Bush was mostly a bad boy, so the media skewered him all the time.  Yet when the media tried to skewer Trump, he skewered them back.  They still seem to be wondering how he got that power.  (Part of the answer, of course, is that while Obama and Bush were studying business and law at Harvard and Yale, Trump was spending time on studio sets, watching and learning.)

There will be much talk over the next few hours and days about what happened, what went wrong, and why Trump did an about-face by calling sixty cruise missiles into service.  Was the president tricked?  Was he overpowered?  Did he make a mistake?  Has he been a shill all along?  Or was this part of some master plan?  These questions will seek to discover the truth of the April 6th event.

But in the long run, more important than the event itself, will be this question: whose narrative—Trump’s or the MSM’s—will most successfully explain and contain it?  To get a feel for where the two narratives are likely to go and which might win out, let’s put on our creative writing hats and think like storytellers.

What is the moral of the story that the mainstream media is currently pushing?  What is the fundamental thematic argument that CNN and MSMBC and the New York Times are making with every new chapter they introduce?  Since the inauguration it’s been something like this: Trump’s a goofball, Trump doesn’t know what he’s doing, he’s in over his head, he doesn’t understand.

(There was a time, of course, prior to Trump’s inauguration when the message might have been he’s pure evil. And there’s also the “sneaky secret spy” one that comes back every now and then that casts Trump as a clandestine Russian operative.  But neither play quite as well today as Trump’s a bumbling fool and he’s failing.  Hence CNN audiences get to sit through endless loops about Trump’s cabinet and legislation falling apart, Trump being sued for his past incompetence, and Trump being too klutzy to even walk down a flight of stairs without gripping the handrail.  Post election SNL sketches depict Trump as the clueless dope who has to Google “ISIS” while a Bannon in black plays the true evil genius who pulls the strings.)

Hence, we can probably expect to find the MSM leaning considerably on terms like “foolhardy” and “ill-conceived” when they describing the cruise missile deployment.  We’re also likely to see “experts” called in to explain how Trump’s plan of action was the worst possible course forward, how he’s unwittingly destabilized the entire balance of power, and how the whole situation may well snowball into World War III all because Trump didn’t listen to knowledgable advisors and acted without understanding what he was doing.  This would best support and expand upon the established elements in the MSM story. 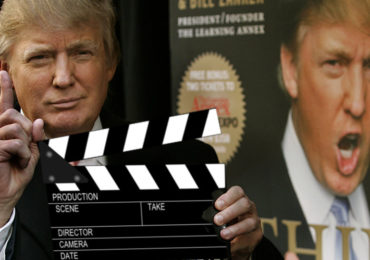 Syria Strike: The Movie as presented by the mainstream media promises to be a dark and unsettling piece of social criticism, one of those ridiculously sad stories that would also be funny were it not so tragic.  The American president, the film will no doubt argue, is in over his head, and our entire species is now in jeopardy because of this.  MSM audiences will also experience the dramatic devastation that the missiles have caused.  There’s likely to be loss of life, divided families, and tears.  It will not matter that the collateral damage was unintentional—it will be heartbreaking while completely unnecessary. If only the commander in chief had been just a bit more competent…

However, Trump will already be working on his own version of that same film property.  For clues on what to expect from the Trump production, let’s recall what the message of the Trump narrative is.  Since even before the inauguration, it’s been: I’m making things better; I understand the problems and I have a plan; relax, I got this.

So, thinking again like a writer, how best to fit the Syria strike into that narrative?  It needs a happy ending.  Tragedy along the way is forgiven if there’s a happy ending.  To the extent that Trump understands this, he’ll know he has to offer a big positive payoff.

We can start with the cruise missiles, but this can’t take the country or the world into war.  It has to end quickly, and when it’s over it has to have been about more than just retribution for some chemical gas attacks.  Remember, the future hasn’t happened yet.  Trump can write this.  He very likely has some idea of where he wants it to go.

So let’s brainstorm.  What if it turned out (hypothetically, of course—we’re just spitballing) that rogue elements were hiding out in the airbase?  (Needless to say, we can account for Trump not reporting this ahead of time because you don’t telegraph your motives to the enemy.)  Now our president has just saved the lives of countless Syrian civilians and when we play the airstrike back it wasn’t really that bad because of these rogue elements.  What if it was still a bad airstrike, but the whole thing ends with Putin and Assad and Trump all in a room signing a trilateral cooperative treaty for the establishment of safe zones and a collaborative plan for stabilizing the country?

There are ways that this can work out and Trump’s narrative can resolve itself into a feel-good heroic tale that would beat the MSM product hands down.  We may or may not see this happen.  But my guess would be that Trump is aware he has to deliver a payoff and is already on the case.

On April 6th, Trump made a decisive move that has changed order of things.  It’s a move that you and I may not today understand and a move that even Trump may not have completely thought through, who knows?  But it’s worth remembering that Trump, unlike no other president in recent memory, understands narrative and has a keen sense of what works and is the author of his own scripts.

Sometimes it’s easier to set things straight after knocking into them.  There’s more resistance when everything’s at rest, but with crisis comes opportunity.  By upsetting the balance, Trump has bought a big bucket of criticism in the short term, but he’s also gained a handful of new options that he didn’t have before.

If Trump finds a way to payoff this moment of insecurity and dread by hammering down a stronger and more lasting signal for stability and peace it would be just another example of the same pattern he has exhibited repeatedly since he announced his candidacy.  He often seems to lose his footing.  From the ground it looks as though he’s kicking away from the very rock he’s attempting to scale.  But when the ropes stop swinging and we’ve all caught our breath, it always seems that somehow he’s higher up the mountain.

I’m not promising that it will definitely happen this time.  I’m just saying that I’ve watched Trump pull off the very sort of feat I’m describing numerous times.  And when he’s come back yet again, it’s hard not to think he had it all planned.  Because he never seemed to break a sweat.  We did, but he didn’t.

Bottom line: I think that Trump genuinely and intuitively understands narrative and payoff.  He’s a proven expert at the old Hollywood third-act turnaround, of seizing victory from the jaws of defeat.

Next Post How much are Kushner and the Zio-globalists infiltrating the Trump Administration?