Download
Today Dr. Duke had one of his most important shows ever. He laid out an airtight case that the Syrian government of President Assad had no motive to use poison gas while the agents of the pro-war neocons, Israelis, and their allies had every motive. He roundly condemned Donald Trump’s decision, and urged him to go back to his campaign promises to reject foreign wars and pursue an America First foreign policy. 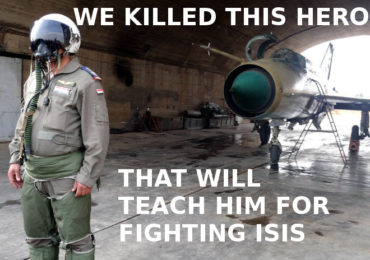 British author and activist Mark Collett warned President Trump that he is very much mistaken if he feels that he can shore up his presidency by warming up to the neocons, who will use him and then throw him under the bus. Dr. Slattery made the point that as disappointed as he is with President Trump, he thinks that Trump feels cornered by a hostile Congress, Judiciary, and Media and is doing this to buy himself some breathing room. He reserved the bulk of his ire for erstwhile progressive peace activists who parade about in obscene pussy hats and never gave the President credit for trying to pursue a non-interventionist foreign policy.

If you need to wake anyone up on what is going on with this Syria business, send them this show.

Next Post Syria Strike: The Movie — By Professor Richard Sloan