It is true, however, the President is trying to pick and choose his battles, and in the process is making concessions along the way. These are not always concessions that we are happy about, and there is every reason to feel alarm at certain developments. There is no guarantee that Donald Trump will succeed in his agenda.

We present the following article from Zero Hedge not to turn people against the President, but to report honestly on the challenges he faces so that we, who support much of his election agenda, are better able to do the work on the ground that must be done.

After Wikileaks revelations that Citigroup picked Obama’s cabinet, it appears the Trump administration is succumbing to ‘same globalism, different bank.’

Weeks after the Daily Mail exposed an internal struggle between Kushner-linked Goldman Sachs operatives and Trump advisor Steve Bannon, it has become clear that an “ideological coup” led by globalist bankers is well underway – claiming populist Steve Bannon as their latest victim. This ties in with Roger Stone’s warning that Trump’s son-in-law Jared Kushner has been leaking anti-Bannon information to MSNBC’s Joe Scarborough. 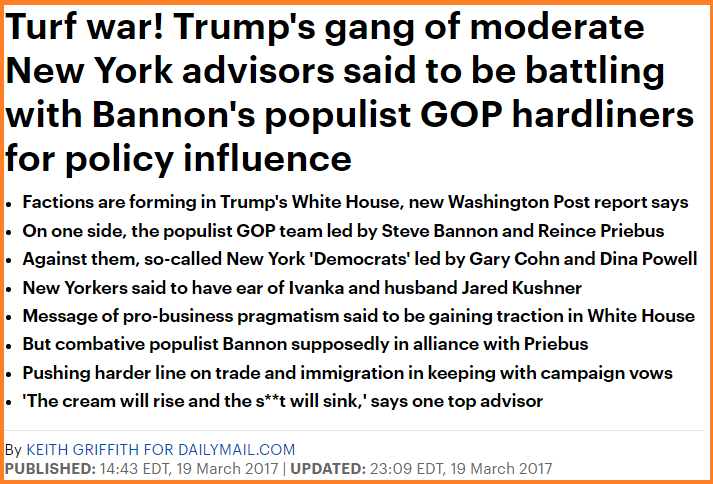 Well, it appears the Goldman globalists have won… for now. Wednesday evening, former Breitbart lead investigative reporter Lee Stranahan dropped an insightful Periscope video in which he laid out exactly what’s going on in the White House – pointing out who’s running the show, and imploring people to simply research the players for themselves.

In a nutshell: Weeks after meeting with Goldman Sachs CEO Lloyd Blankfein at the Four Seasons bar in DC, Jared Kushner-friendly Goldman alums have successfully maneuvered Trump’s top advisor Steve Bannon off the Natl. Security Council – further strengthening the globalist cabal’s influence over President Trump. Jared Kushner, it should be pointed out, has a well documented history of donating to Democrats; including Hillary Clinton, Chuck Schumer (D-NY), and Robert Mendez (D-NJ).

Let’s look at the ex-Goldman operators within the Trump White House:

Gary Cohn – recently Goldman’s #2, is Trump’s chief economic advisor – who was granted an unprecedented accelerated payout of $285 Million in order to go work at the White House.

Instead of draining the swamp, Goldman alums Cohn, Powell, and Treasury Secretary Mnuchin are the swamp…

The populist, nationalist agenda that Donald Trump was elected on is getting pushed out of the White house.

The fact that Powell is in (who was in the Bush administration), as a Security advisor, is deeply troubling. She’s got Ben Rhodes’ old job.

Goldman Sachs has taken over…

We did not vote for Globalism.

And before you say “Wait, Steve Bannon is from Goldman!” – full stop… Bannon addressed how the megabank has changed and no longer shares his values.

What can Trump voters do?

Stranahan has one request for any and all who oppose this ideological coup by Goldman Sachs: CALL THE WHITE HOUSE!