Forward by Dr. Patrick Slattery — This article below from PressTV presents further evidence that the ISIS crisis is very much a result of Israeli and Zio-American conniving in Syria. It is clear that there would be no civil war in Syria were it not for the support that violent and largely foreign “rebels” have received from Zionist forces, largely through Zio-puppets and lackeys like Qatar, Sauidi Arabia, and Turkey. Now these same governments are providing a regional fig leaf for ZiObama’s bombing of Syria, which is ostensibly aimed at ISIS extremists but is a violation of Syria’s territorial sovereignty and could very easily morph into a U.S. war against Syria’s legitimate government. Meanwhile, Israel has shot down a Syrian government fighter jet over Syrian territory. The best way to overcome the ISIS crisis would be to restore normal diplomatic and economic relations with the Syrian government and stop using our military as Israels attack dog. 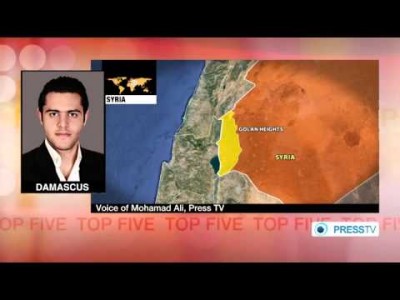 Syria has once again slammed the Israeli regime’s support for the Takfiri ISIL militants operating inside the Arab country.

A Syrian military official, whose name was not mentioned in the reports, made the comments on Tuesday after Tel Aviv said earlier in the day that it had shot down a Syrian warplane as it attempted to fly over the ceasefire line into the Israeli-occupied Golan Heights.

The official confirmed the shooting down and underlined that the move was based on Tel Aviv’s policy of supporting ISIL Takfiris.

The aircraft was apparently a MiG-21 fighter jet which was downed by a surface-to-air Patriot missile, the Army radio said, adding that the wreckage landed on the Syrian side of the plateau.

The development comes amid heavy clashes on the Syrian side of the Golan Heights. The Syrian government has been hitting back at the foreign-backed militants there with frequent airstrikes.

Syria has been gripped by deadly violence since March 2011.

According to reports, the Western powers and their regional allies — especially Qatar, Saudi Arabia and Turkey — are supporting the Takfiris fighting against the Syrian government.

Golan Heights have been under the Israeli occupation since the 1960s. The Tel Aviv regime captured 1,200 square kilometers (460 square miles) of the Golan Heights during the Six-Day War of 1967 and annexed the region in 1981.