Pre-Commentary by Dr. David Duke — Robert Fisk is the most respected European journalist in the world on the Mideast conflicts. In the months and days leading up to the Iraq War, Fisk exposed as I did the “weapons of mass destruction” Zionist lies against Iraq and warned the world that the war would unleash the most radical elements and perpetual conflict and bloodshed.

Among other things he exposed the key Israeli role at Abu Ghraib in creating one of the biggest black marks against America in our history: the horrific tortures, including sexual tortures against Iraqi prisoners at Abu Ghraib.  He unearthed the details of the Israeli role in the massacres of Shatila and Sabre in Lebanon and in the key Zionist role in fomenting hate and war between Christians and Muslims in Lebanon as a way of weakening and defeating Lebanese abiliity to defend itself from Israeli land and water resources.

Now he has sharpened his pen on the self-admitted “proud Jew,” John Kohn who hid his real family name politically masqueraded with the very Irish name of Kerry in the heavily Irish Massachusetts.

Fisk points out that is the Syrian government and the Syrian Army which has been fighting with great courage the blood-thirsty ISIS and al Qaeda offshoot, al Nusra terrorists for years. Over all this time, the Zionist controlled State Department of Kohn and the Zionist media has painted the Syrian Government as the terrorists and the oppressors and the “rebels” as the “good guys.”

Now the truth comes out in full force.

ZiObama, ZioKohn and the Zio-controlled Congress of the U.S. has now voted to give 500 million of military aid to the “moderate rebels.” The so-called “moderate rebels” are full of ties to Isis and al Nusra.

The fact the Ziobama could say that he wants to fight ISIS by military support of the “moderate rebels” shows the iron grip of the Zionists over the media and politics of America. For certainly even the most imbecilic of imbeciles must realize that “rebels” won’t be using their weapons against ISIS, they will be using them against the Syrian Government, the real heroes who have been fighting courageously against ISIS al Nusra for years.

Any weakening of the Syrian Government can only AID ISIS!

If the Syrian government falls, ISIS will take over the whole country, and with their soldiers freed from fighting Assad they will sweep into Jordan, Iraq and other Mideast nations!

The truth is of course the Zionist uberinfluencers of America and Britain and France want unending war in Syria and Iraq. They want the most crude, ignorant and criminally minded people to rule these nations, and they want unending civil war…. simply because they think that the Jewish Racial Supremacist State of Israel is served by this carnage. This has been the policy of Israel and Zionism from day one!

Nothing can more clearly show the Zionist control of the United States more clearly than the fact that the U.S. Government has opposed the government of Syria for one reason: it supported the Palestinians, the Lebanese, the Iranians and other nations  that Israel considered its enemies. Supposedly, our worst enemies in the world have been al Qaeda and the radical Islamic movements like them. So why would we support them by our policies in Syria over the last few years and try to destroy the most moderate governments?

There is only one possible answer: Because it was interest of Israel to have a policy in Syria that supported the very forces and organizations who are claimed to have committed the 9-11 attacks!

The Interests of Israel are all that is important to the rulers of America.

That is the only way you can possibly explain this insanity!

Read this article by Robert Fisk and begin to understand why we have the ISIS crisis. –Dr. David Duke

By Robert Fisk (from the Independent). John Kerry is becoming more and more like William McGonagall, the “worst poet in the world” whose horror at the 1879 Tay Bridge railway disaster yielded the imperishable observation that it “will be remember’d for a very long time”. 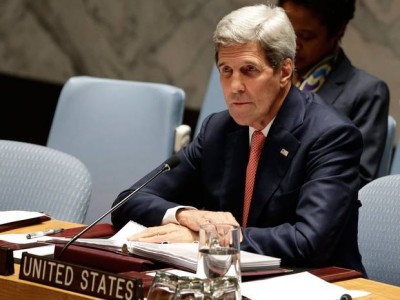 Like McGonagall’s verse, Kerry’s attempts to explain America’s crusade against its latest evil enemy are so awful, they are addictive. Just when you think that Kerry’s lame explanation to American politicians of Obama’s Iraqi crusade – “[Isis] has to be defeated, plain and simple, end of story” – can’t get any more childish, it does.

For sheer infantilisme – the French word captures it best – I dare readers to wade through the following claptrap without a snort of disbelief. “I want to make sure that by the time we’re done here today, I’ve heard from you, I know what you’re thinking,” quoth Kerry to the Senate Foreign Relations Committee last week, “and you’ve heard from me and you know what we’re thinking, what the [Obama] administration is thinking, and that you have a clear understanding of what it is that we have done so far, of how we see this and how, hopefully, we can come to see it together, what we’re doing now and of where we go next.” It was all very complex, he said – and will also, no doubt, “be remembered for a very long time”.