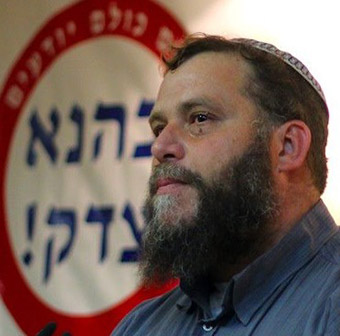 Imagine what the Zio-media would do if an organization in Europe, was set up with the specific intention of preventing Europeans from marrying Jews, or even working in the same geographic location.

Imagine the negative coverage that the Zio-media would give to such an organization—especially after it became known that this organization actually received money from the government of the country in which it was located, and that its leading members sat in the ruling party’s highest echelons.

Any such organization—and its country and government—would be lambasted by the Zio-media, and the Zio-controlled US government would no doubt be incited into attacking such a “racist” state and organization, either with sanctions or even physically with military force.

After all, the Zio-media would say, “this would be racism and we can’t allow that.”

There are, of course, no such organizations with state funding in Europe.

However, there is one in Israel!  It is called Lehava, and while nominally “independent”, it does actually receive funding from the state and its supporters do sit in the highest echelons of government.

Lehava, established in 2009, named itself after the Hebrew acronym for “Preventing Assimilation in the Holy Land.”

It has now come to prominence once again after the Times of Israel revealed that the organization has opened a hotline enabling members of the public to inform on women so that they can be persuaded to end the relationship.

According to a May 2011 report, several important Lehava members, including its leader Bentzi Gopstein (pictured), have close ties to a government-funded non-profit organization, also run by Kach followers, called Hemla (“Mercy”), which claims to help “girls from broken homes who are in danger of forced conversion and of becoming involved in crime.”

According to the report, since 2005, Hemla has received between $150,000 and $175,000 (USD) each year from the Israeli government, providing about half of its operating budget.

Gopstein is identified as Hemla’s “director of public relations” and receives a salary of about $10,000 (USD) a year.

In 2010, Hemla director Rachel Baranes told a reporter that Hemla was established to help in “saving Jewish girls from assimilation, whether it’s foreign workers, Arabs, [or] people with no connection to our religion.”

In an interview with the Israeli National News service, Arutz Sheva, Gopstein said that his new hotline “will alert volunteers of situations where Jewish girls are in relationshipswith non-Jews. The activists will take ‘action’ top stop these relationships.

Lehava is one of the few organizations dealing with assimilation inside Israel, Gopstein told Arutz Sheva.

Although the organization already has more cases than it can handle, Gopstein believes that the week of Yom Kippur – the Day of Atonement, commemorated this Saturday – is the right time to raise consciousness among Israelis on the issue.

“At this time all those responsible for this situation, as well as those who would like to improve things, are involved in a personal accounting of their behavior,” Gopstein said. “We will use any tools at our disposal to save Jewish girls,” he added.

In February 2011, Gopstein was invited to testify before the Knesset Committee on the Status of Women by Knesset member Tzipi Hotovely, of Prime Minister Benjamin Netanyahu’s Likud party, in a discussion on “assimilation.” He warned the committee about the alleged dangers of Jews and non-Jews mixing, and urged the government to do more to fight against it and to “bring more talk about Judaism, more talk against assimilation, into the schools.”

In May 2012, Lehava members distributed phony wedding invitations in Jerusalem that asked people to join “Michal [a Jewish name] and Mohammad as they celebrate their marriage on a Friday night at the Shahid (martyr) events hall in Ramallah,” with a warning that: “If you don’t want your daughter’s wedding invitation to look like this then… Don’t let her work with Arabs or do national service with non-Jews, don’t let her work in place that employs enemies and don’t bring home migrant workers.”

In August 2011 Lehava launched a campaign called “Coast Guard” to prevent Jewish women from mingling with Arab men on beaches.

In December 2010, Lehava initiated and distributed a letter signed by the wives of some 30 prominent rabbis urging Jewish women not to date, socialize, or work with Arabs.

The letter, whose signatories included the wife of Rabbi Ovadia Yosef, the spiritual leader of the Shas party, which sits in Prime Minister Benjamin Netanyahu’s coalition government, stated: “Don’t date them, don’t work where they work and don’t perform National Service with them.”

Also in December 2010, Lehava organized a rally to protest against Jews renting apartments to non-Jews in the city of Bat Yam, and started a telephone hotline for Jewish Israelis to “report” other Jews who rent apartments to Arabs.

In March 2010, Lehava made international news when it issued a letter calling on Israeli model Bar Refaeli to break up with American actor Leonardo DiCaprio because he isn’t Jewish.

In 2010, Lehava called for a boycott of a supermarket in a West Bank settlement that employed Palestinian men alongside Jewish women.

In July 2012, Lehava posted a video on its website of two former members of the Haganah, precursor to the Israeli army, bragging about castrating Palestinian men during Israel’s creation.

If non-Jews, anywhere, had to engage in any of these activities, the same Zio-media their Jewish Supremacist organizations such as the ADL, the SPLC and so on, would be all over the media and TV, screaming and shouting about “racism” and “anti-Semitism.”

But, because in this case, it is being done by their fellow tribalists, these same Jewish Supremacists and their controlled media are completely silent.

Next Post New Syria “CW Initiative”: But What About Israel’s Stockpile?