A new “initiative” to make Syria hand over its chemical weapons is currently being flouted by the Obama regime as a way of avoiding a potentially embarrassing defeat in a Congressional vote on the matter—but it ignores the reality that Israel has the largest stockpile of chemical and other weapons of mass destruction in the entire Middle East. 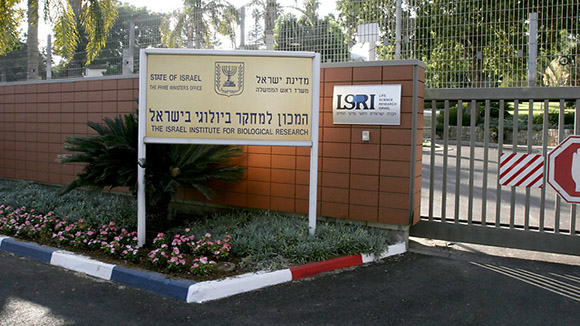 According to a report in The New Observer, the US Congress Office of Technology Assessment has recorded Israel as a country as having undeclared chemical warfare capabilities, and an offensive biological warfare program (“Proliferation of Weapons of Mass Destruction: Assessing the Risks,” US Congress Office of Technology Assessment). Israel is not a signatory to the Biological Weapons Convention (BWC).

The Israeli chemical and biological weapons programs are located at the Israel Institute for Biological Research (IIBR) in Ness Ziona (“Israel and Chemical/Biological Weapons: History, Deterrence, and Arms Control“, University of Maryland).

According to the Nuclear Threat Initiative (NTI), a nonpartisan organization dedicated to  “strengthening global security by reducing the risk of use and preventing the spread of nuclear, biological, and chemical weapons,” Israel’s biological warfare (BW) program “focuses on IIBR and its staff of “approximately 370 employees, 160 of whom are scientists holding doctorates in biology, biochemistry, biotechnology, analytic, organic and physical chemistry, pharmacology, mathematics, physics and environmental sciences.

“A highly classified defense research center operated and funded by the Ministry of Defense’s (MOD) Division of Research, IIBR’s mission statement and broad scientific mandate exemplify the ambiguity of dual use.

“As of 2011, IIBR publications have focused on anthrax bacterium and plague bacterium.

In 1983, the CIA produced a special report on Israel’s weapons program, but excised the page dealing with chemical weapons. This missing page was recently found and states that the CIA had hard evidence that Israel possessed a chemical weapons stockpile of indeterminate size, including, according to the report, “persistent and non-persistent nerve agents.”

The 1983 CIA estimate reveals that U.S. intelligence first became aware of Israeli chemical weapons-testing activities in the early 1970s, when intelligence sources reported the existence of chemical weapons test grids, which are specially instrumented testing grounds used to measure the range and effectiveness of different chemical agents, particularly nerve agents, in simulated situations and in varying climatic conditions. It is almost certain that these testing grids were located in the arid and sparsely populated Negev Desert, in southern Israel.

So when will the “international community” demand that Israel hand over its stockpile of chemical weapons? Don’t hold your breath on that one.