The announcement that David Greenglass, one of the original gang of Jewish Communist spies who betrayed America’s nuclear secrets to the Soviet Union, has died at the age of 92, serves as a timely reminder of the treasonous nature of Jewish Supremacism. 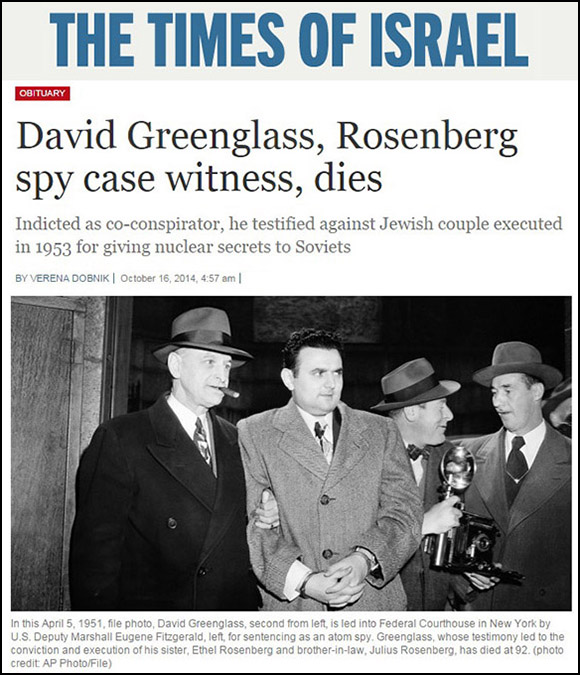 Greenglass was the brother of Ethel Rosenberg, and part of the infamous atomic treason spy ring of the 1940s and 1950s which handed the blueprints of the atom bomb to the Soviet Union—a state which had been set up by Jewish Communists in the first place.

Greenglass served ten years in prison and was released in 1960. He settled in Brooklyn, New York, and lived out his life peacefully under an assumed name.

The background to Greenglass’s arrest is covered in detail in the book “The Secret Behind Communism” by Dr. David Duke (obtainable from Daviddukeonline.com here). Herewith follows an extract from that book, dealing with the Jewish Communist atomic treason against America:

On February 3rd, 1949, British intelligence agents arrested a diminutive German-born atomic scientist by the name of Klaus Fuchs. He was accused, and subsequently convicted, of passing atomic secrets to the Russians.

At the beginning of World War II Fuchs had been interned by the British as an enemy alien. He was subsequently released from British custody and admitted to the U.S. at the personal instigation of Albert Einstein.

As a scientist for the Manhattan Project, he had access to America’s innermost atomic secrets between 1942 and 1945, and he is said to be one of the few men familiar with the overall construction of the A-bomb.

He served nine years in prison in England, and upon his release, emigrated to communist East Germany where he was received with acclaim and served in the Institute for Nuclear Research in Rossendorf, near Dresden.

Acting on information obtained from Fuchs, the FBI began a series of investigations which resulted in the eventual arrest of nine other members of the ring. Of these nine, all of whom were later convicted, eight were Jewish. Here is a brief description of the entire ring:

Three other members of the Fuchs-Gold ring were also arrested. However, unlike the first seven—who pleaded guilty—they chose to plead “not guilty.”

As a result two of them—Julius and Ethel Rosenberg—received the death penalty and the third, Morton Sobell, received 30 years in prison.

Previous Post Hear Dr. David Duke on How More People are Standing Up to the Zio-Fanatics

Next Post It is Not “White Privilege” — It is “Jewish Privilege!”