The latest shocking display of Zionist-slavery on display at the annual International Atomic Energy Agency (IAEA) conference  in Vienna—which saw the Zio-controlled West vote down a motion condemning Israel for its undeclared nuclear arsenal—provides conclusive proof, if any was needed, of just who exactly controls the foreign policy of those nations. 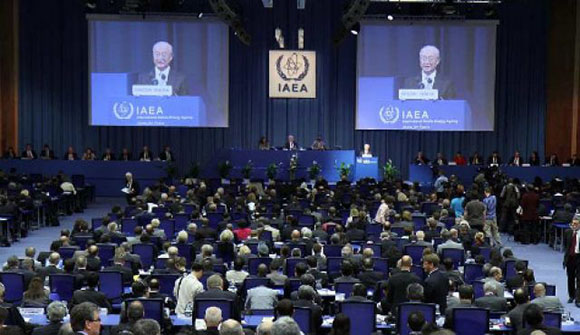 In a typically deceptive manner of reporting, usual for Zio-biased media services, a Reuters report of the IAEA meeting said that the body’s conference had “rejected an Arab resolution targeting Israel over its assumed atomic arsenal, in a diplomatic victory for the Jewish state and Western countries opposing the initiative.”

In reality what happened was that large number of nations not under Zio-control—the vote was defeated 58 to 45—wanted to point out the blatant hypocrisy of the racist Zionist state and its puppet US government in condemning Iran for that nation’s mythical and non-existence “atom bomb”  while at the same time supporting and actively participating in the continuation of Israel’s massive nuclear arsenal.

Furthermore, what the Reuters report also deliberately omitted to add, the only reason why the motion was defeated at all was due to extensive lobbying by the Zio-slaves of the US and UK delegations, who told many smaller nations attending the conference that further aid packages to those countries would be at risk if they voted for the motion.

Instead, the Reuters report merely made an in-passing reference to the lobbying without giving any details, and then further deliberately muddying the issue by trying to link it to the recent airstrikes against ISIS (which of course have absolutely nothing to do with Israel’s nuclear arsenal).

Israel has the Middle East’s only stockpile of nuclear, biological and chemical weapons, and it’s the only Middle Eastern country which has refused to sign the nuclear Non-Proliferation Treaty (NPT).

According to the Reuters report, the “United States and its allies argued that the resolution would have been counterproductive. Western officials said progress has been made in preparatory talks over the last year on holding a conference to discuss the creation of a Middle East zone free of weapons of mass destruction.”

A draft text circulated at the IAEA meeting by 18 Arab states expressed “concern about the Israeli nuclear capabilities and calls upon Israel to accede to the NPT and place all its nuclear facilities under comprehensive IAEA safeguards.”

At the same time, the U.S. and Israel–which are increasingly becoming one and the same thing—continually focus on what they claim is Iran’s “nuclear activity as the main proliferation threat” in the Middle East—even though every single intelligence agency has reported that Iran has no nuclear weapons program.

Iran, which has signed the NPT—unlike Israel—has been subjected to broad economic sanctions by the Zio-puppet government in Washington DC., and has more than once been threatened with military action.

Israel, on the other hand, not only has hundreds of nuclear weapons, but can bomb and murder thousands of Palestinians and terrorize vast numbers of innocent people without any sanction at all.

Israel can invade, occupy and steal Palestinian land, Lebanese land, Syrian land, hold it against United Nations resolutions for over 50 years. NO SANCTIONS at all are levied against a nation created by massive terror and ethnic cleansing, whose victims still are not allowed to return to the places of their birth!

If anyone wanted evidence of the power of the Jewish lobby over western governments, then they need look no further than this week’s IAEA conference—and American and British foreign policy.

Next Post Hear Dr. Duke Today on Zio Nuclear Energy Hypocrisy and The Myth of “Self-esteem” and Achievement