By David Duke — The following is a letter I wrote to the Telegraph in Britain  about an Israeli written letter in which it headlined that the Doctors who wrote the letter to the Lancet promoted the Ku Klux Klan! — As the letter shows it is a blatant lie.

Here’s a picture of the headline and my letter below. 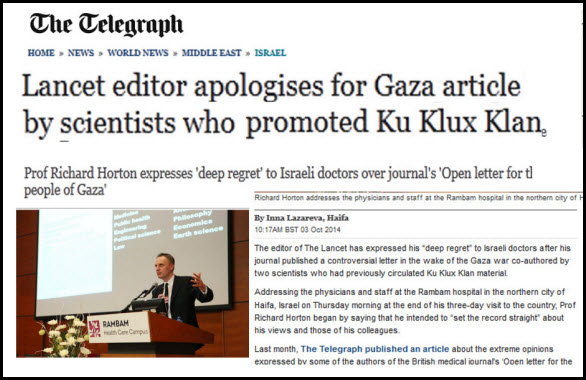 I was appalled by outright falsehoods and libelous assertions in the article published in The Telegraph on Oct 3, 2014 headlined:

The editor of The Lancet has expressed his “deep regret” to Israeli doctors after his journal published a controversial letter in the wake of the Gaza war co-authored by two scientists who had previously circulated Ku Klux Klan material.

I don’t know where to begin in refuting the blatant lies contained in this article.

Let’s begin by discussing the headline, which has the greatest impact on people’s perceptions.

To say that the scientists who wrote the letter exposing Israeli crimes in Gaza had promoted the Ku Klux Klan is utterly ridiculous and a complete falsehood.

Then to allege that the doctors circulated Ku Klux Klan material is another a bald-faced lie.

Two of the twenty-four doctors who wrote the letter on Gaza, had among their friends linked a video I did on Gaza and why Israel can get away with such outrages.

The video is called CNN, Goldman Sachs and the Zio Matrix. It exposes Zionist extremism and the Zionist tribal racism that has a role in Zionist influence in media and governments around the world. It also shows immense Zionist influence in International banking such as Goldman Sachs and the Federal Reserve and World Bank. It exposes the Jewish tribalist racism of Israel and the Zionist extremists in every nation on Earth. This racist power and influence is what gives them the influence that allows Israel to literally get away with murder, ethnically directed mass murder to be exact.

To suggest my video is a “Klan video” is another bald-faced lie.

For decades I have no Klan ties whatsoever and the video is obviously not Klan material,

The video is in fact not anti-Semitic and goes to great lengths to honor praise those Jews who oppose Jewish racism, just as they would oppose racist suppression by anyone against anyone.

The video in fact condemns racism and asks why racism, racial oppression or exploitation is condemned when present in any people on Earth, but no one is allowed to world’s most powerful and virulent racism, that of Israel and International Zionism.

So the two doctors who linked to this video were certainly not promoting the Ku Klux Klan in any way.

In the article in the Telegraph, which was written from Israel, I am referred to as a “White supremacist” when in fact my entire adult life I have never harmed a single soul and always and repeatedly condemned any sort of racial supremacism including white supremacism.

In all my writings and books and videos I repeat almost daily that I condemn racial supremacism and any suppression or exploitation of one people against any other people. That is easily documented. It is true that many years ago as a young man that I was part of a non-violent Klan organization in America. But I resigned from the Klan almost 38 years ago, I am now 64 years old now. Like most people I have evolved and grown in my thinking and am proud of my anti-war and human rights positions.

I have also gone on to earn my full PhD in History and I have lectured in over 200 universities around the world.

So my proper title should be Republican or Former member of the House of Representatives Dr. David Duke. And the suggestion that I am associated with the Klan today is totally false. In fact anyone can prove that to their own satisfaction by examining my website and reading the millions of words and the thousands of interviews I have done since that time!

Headlining my Klan past as a young man would be equivalent to headlining the fact that Nelson Mandela was former Communist leader. (actually the Communist Party in S.A. have shared his documents as a member of the Central Committee of the Communist Party in South Africa. Why is this not mentioned by your newspaper when you mention Nelson Mandela? Or is someone’s past only important if he dares to expose Jewish racism?

At the same time you label me falsely as a White supremacist you never refer to the criminal leadership of the Jewish state as Jewish supremacists. Anyone who knows anything about Israel knows its extreme Jewish racism.

I believe that racist hatred or oppression against any people is wrong.

We saw a demonstration of Jewish extremist power to blackmail and repress in the craven moral cowardice of Dr. Horton of the Lancet, who after the Zionist pressure was unleashed, traveled to Israel to kiss that hand of the master who beat him.

He traveled to Israel at the behest of a radical Israeli, racist organization with ties to the Likud and then he tells the world how honored he is to be in wonderful Israel. Then he used his talk to condemn the doctors and as well as myself and my video which simply dare to speak out for the thousands of innocent victims of Israeli terrorism and murder in Gaza.

Yet, he spoke not word of condemnation of Israeli mass murder.

He spoke not a word in condemnation of the massive Israeli ethnic cleansing of 600,000 innocent people by terror and murder. These people still cannot even return to the place of their birth! Has Dr. Horton condemned that!

His craven cowardice is proof of every point I make in my video on CNN, Goldman Sachs and the Zionist Matrix that exposes Zionist racist power and influence.

The fact that your publication would accuse doctors who simply were trying to defend the Palestinian victims as “promoting the Ku Klux Klan, is also proof of all the essential points I made in my video. If you expose Jewish extremism and racism you are the one who will face condemnation not the Jewish racists.

According the YouTube analytics over 750,000 people all over Europe and the world have seen my video and over 96 percent of the viewers agree with it and recommended it with a thumbs up rating!

Please get your facts straight and let your readers not be prejudiced about the critical issues of our time.