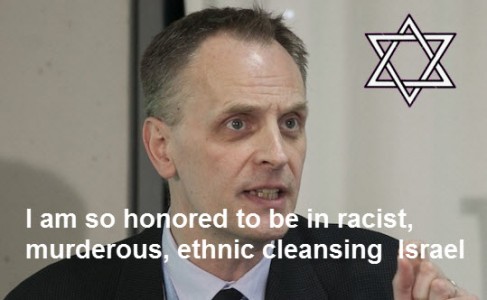 Due to unrelenting Jewish hatred and threats launched against Lancet magazine (the world’s most read and respected medical journal, the chief editor, Richard Horton, backed down and agreed to censor the original Doctor’s letter which condemned the the massive crimes against Palestinian civilians in Gaza.

The only way for the world to judge this craven act is by hearing the other side. Share the following letter by Dr. Duke to Lancet and Richard Horton:Dr. Duke has sent this official letter to Lancet and Dr. Horton and made it openly available to the world.

I just watched a video of your craven, cowardly and thoroughly disgusting speech in praise of Israel.

You said were “extraordinarily humbled and proud” to be in Israel.

You said you were regretful of the polarization caused by the doctor’s letter in the Lancet exposing the massive, horrific crimes by the State of Israel.

Bowing to the threats of extremist Jews toward you and Lancet, you have announced how proud you are to be in Israel, and that you would rescind the letter on the Lancet website.

Dr. Horton, I have some important questions for you.

By the very nature of their profession, shouldn’t they be even more dedicated to saving of life?

Why do you now feel, after a ton of Jewish extremist hatred heaped upon you, that doctors should not expose these massive human rights crimes against thousands of innocent civilians?

In the latest Israeli genocidal action, 500 children were killed.

Haven’t you failed as a doctor because you have stood by and not lifted a finger to stop the Zionist massacre and you now get on your hands and knees before the Zionist State and in effect beg their forgiveness because you slipped up and allowed the truth of this massacre to be written in the Lancet?

You condemn me and my video in you speech, but Doctor, at least I have spoken out repeatedly and powerfully in defense of Palestine.

You, on the opposite hand are, “honored to be in Israel” and are now effectively acting as an Israeli agent who will silence any future words about horrific Israeli crimes against civilians n Gaza. You have also pledged that Lancet would not take part in the much needed boycott of Israel.

About 5,000 children were burned, wounded, blinded, crippled or maimed. A hundred thousand homes were bombed and destroyed by the Israeli state. Over 50,000 powerful missiles, bombs and explosive shells were rained down upon Gaza.

Have you no shame about supporting this mass murder with your presence in and praise for the Israeli state?

It was not just a small group of radicals in Israel who committed this crime in Gaza. This was mass murder and terrorism against thousands of innocent people by the organized Israeli State.

Where is even the slightest condemnation from you in your speech of the crimes of the Zionist State in Gaza?

No, instead of condemning Zionist Israel you protect the Zionist State and you condemn me and the leading group of doctors who dare to mention the ugly truth about Israel.

You also condemned my video which proves how Zionist tribal racists around the world combine together in media, finance and government to threaten cowards like you.

In effect you have become complicit in the crimes of Israel.

You cannot be ignorant of the crimes of the Zionist State, can you?

This is the same Zionist State that you say you are so proud to be in, and to subjugate yourself to. This state you are so proud of, has ethnically cleansed hundreds of thousands of people, and still refuses to let them return to their homes from which they were expelled by terror and murder.

In your speech did you criticize this massive human rights crime?

Did you demand that the Israeli state let those expelled from Israel return the homes of their birth? Or did you remain cravenly silent?

Do you not, in your heart of hearts, think the Palestinians should have the right to be able to return to their homes?

If so, why don’t you speak out about it?

Where was your condemnation for the Israeli prison system, which, as even Israeli human rights groups have exposed as torturing well over a hundred thousand people in its dungeons?

As a doctor who endeavors to eliminate human pain and suffering, how could you patronize the Israeli state guilty of these crimes, much less not speak out about it?

It is tragic to watch your speech, which was nothing but a display of your moral corruption, and complete moral cowardice.

You proclaimed to your Zionist masters that my video CNN Goldman Sachs and the Zio Matrix was abhorrent for its world view.

What exactly in my video do you condemn Dr. Horton?

The world view I express very clearly in the video is that every people on earth must free and independent, and that no people have a right to harm and oppress any other people!

Obviously you do condemn that world view because, as long as it is Jews doing the oppression, ethnic-cleansing, murdering and harming, you have no problem with it. Your world-view is obviously shaped as well by the fact that you know if dare to speak about Jewish tribalism and racism, they will make you pay, and pay and pay.

In fact, your craven actions actually prove the truth of my CNN, Goldman Sachs video, as their Matrix of Power in media, politics and finance were quickly able to change your cowardly mind.

Why is it that politicians can speak about and condemn every kind of racism, except Jewish racism?

The fact that you went running to throw yourself at the feet of your masters in Israel is a very accurate reflection of the truth of my CNN/Goldman Sachs video.

Once the Zio hatred came down upon your head, threatening you and your great medical journal, you ran like a poor, pathetic dog, begging for forgiveness, to lick the hand the master who beat you.

The problem is that every kind word you gave to Israel, and every ounce of criticism you aimed at the free-thinking doctors who dared to defend Palestine, constituted support for the murderous, Racist State of Israel.

Shame on you Doctor. You are a disgrace to your profession, to your oath, to your nation, and ultimately to the people of the world.

Doctor Horton, I urge you and all those who read this letter to watch my video, “CNN, Goldman Sachs and the Zio Matrix.”

Investigate my claims and you will find them entirely truthful and factual.

Think deeply about them and think about their ramifications on the world. The Zio instigated wars of the last few years.

There were no weapons of mass destruction in Iraq. that was the lie the Jewish-controlled media trumpeted, but there certainly was Zio view of Saddam Hussein as Israel’s chief enemy. How many lives were lost in the Zio wars, Dr. ?

I am formally submitting this letter to Lancet.

I expect you to censor it from your readership because it simply has too much ring of truth for you to tolerate.

But, still I formally ask you to print it. As supposedly, the Lancet allows free discussion.

The world will read this letter, though, no matter how you and the Zio press may censor it.

By the way, my video that you found abhorrent, has almost a million views on YouTube alone, and millions of views in the many copies in circulation on YouTube and other video channels. The video has a a 96 percent positive from its viewers. So 96 percent of the people who watch it, love it. I promise you that your actions will be the ones found abhorrent among the vast majority of people who truly believe in human rights!

For clarity, I am a PhD in History not a medical doctor

Next Post Proof of Media Lies Against Those Who Expose Jewish Racism!