The violence, mayhem, and turmoil–including that of the Islamic State (IS, or ISIS) in Iraq–which is currently gripping the Middle East is not historical accident, but the result of deliberate provision of cash, weapons and surveillance to Israel by the Zio-controlled US government, new leaks from NSA whistle-blower Edward Snowden have revealed.

The latest leaks are described by the RT News service as proving that Obama’s so-called “helpless detachment” is “just for show.” 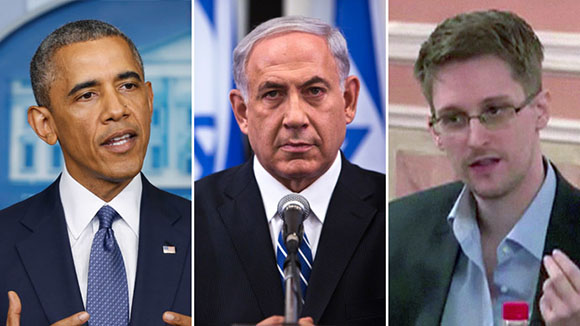 According to that news source, the documents, released by former Guardian journalist Glen Greenwald through his Intercept website, reveal “the amazing contrast between what the United States says publicly, and what it does behind the curtain.”

According to RT, this includes “President Barack Obama’s apparent heartbreak over the Middle Eastern region” while supplying “billions of dollars’ worth of its weaponry and intelligence were being supplied to the Jewish state since the 1960s.”

Greenwald has published his analysis of the latest leaked Edward Snowden document of April 12, 2013, wherein it’s explained just how false the notion that the US is a bystander to the Middle Eastern crisis really is.

In fact, “the single largest exchange between NSA and ISNU is on targets in the Middle East which constitute strategic threats to US and Israeli interests,” the leaked paper reveals.

“The mutually agreed upon geographic targets include the countries of North Africa, the Middle East, the Persian Gulf, South Asia, and the Islamic republics of the former Soviet Union.

“Within that set of countries, cooperation covers the exploitation of internal governmental, military, civil and diplomatic communications; and external security/intelligence organizations.”

One of the “key priorities” of this cooperation is “the Iranian nuclear development program, followed by Syrian nuclear efforts, Lebanese Hizbullah plans and intentions, Palestinian terrorism, and Global Jihad.”

The paper talks about “targeting and exploiting” these priorities.

It goes on to show that both intelligence services have liaison officers in each other’s embassies, enjoy a “cryptanalytic” partnership, and that Israel has direct access to the highest American military technology.

Greenwald supplements this with proof of millions in emergency US funds stockpiled in the Middle East, which Israel can use for its own strategic purposes by simply writing a request.

Over the last decade, Greenwald writes, the NSA has upped the ante greatly on surveillance technology, funding of operations and weapons to its Israeli counterpart, the SIGINT National Unit.

A bulk of this assistance has been used to fight its battles with occupied Palestine – including the Gaza operation, as well as other regional players.

On at least one occasion, a covert transaction of a massive payment in cash to Israeli operatives was carried out as part of the American initiative of using Israel and other US-sponsored actors (including Arab monarchies) to do its surveillance on Palestinian targets for it.

“The new documents underscore the indispensable, direct involvement of the US government and its key allies in Israeli aggression against its neighbors.

“That covert support is squarely at odds with the posture of helpless detachment typically adopted by Obama officials and their supporters,” Greenwald is quoted as writing.

That is despite the US president’s statement on how “heartbreaking” it is to see the Gaza crisis unravel, “as if he’s just a bystander, watching it all unfold”, wrote Corey Robin, a Brooklyn College Professor.

“Obama talks about Gaza as if it were a natural disaster, an uncontrollable biological event.”

Greenwald goes on to list the occasions on which the US has been exposed as supplying arms to Israel; the last such occasion was just before the start of the operation in Gaza, wherein a $1 billion stockpile of ammunition the US stored in Israel specifically for situations like these was used.

The origins of this particular stockpile date back to the 1990s, when the US European Command allegedly stocked it there for future use.

What was not known to many is that Israel only had to make an emergency request to have access to it. One such case was the 2006 war against Hezbollah in Lebanon.

Further support involved multiple UN resolutions shielding Israel from international condemnation and enabling it – something Greenwald sees as peculiar, given the American media’s shocked reaction at how the Middle East situation supposedly takes on a life of its own, despite everyone’s best efforts.

“The new Snowden documents illustrate a crucial fact: Israeli aggression would be impossible without the constant, lavish support and protection of the US government, which is anything but a neutral, peace-brokering party in these attacks,” Greenwald continues.

“And the relationship between the NSA and its partners on the one hand, and the Israeli spying agency on the other, is at the center of that enabling.”

Numerous evidence of this includes the Guardian’s September 2013 disclosure of American “routine”sharing of raw intelligence with Israel without bothering to remove data on US citizens.

But the new Snowden leak details also how the “NSA maintains a far-reaching technical and analytical relationship with” Israeli intelligence, involving all types of data from communications intercepts to targets, language and analysis.

Israeli defense intelligence and Mossad are exposed as key partners in this relationship, under which access to “geographic targets [that] include the countries of North Africa, the Middle East, the Persian Gulf, South Asia, and the Islamic republics of the former Soviet Union” is freely provided by the US.

Further to that, Israel’s intelligence has access to advanced American military technology and equipment for use against what Israel candidly calls “Palestinian terrorism.”

It is precisely the Jewish Lobby’s control over American foreign policy–confirmed once again by the Snowden documents–which led to America attacking Afghanistan, and Iraq, imposing sanctions on Iran and even funding and arming the terrorists who attacked Syria.

The insanity into which this Jewish-Supremacist led foreign policy has drawn America is best illustrated by the fact that the terrorists which the US supported in Syria, have now turned out to be the main threat to Iraq.

Thus the US government is on the same side as the Islamic State (IS, or ISIS as it was known) in Syria, but is its enemy in Iraq!

None of this makes any difference to the Jewish Lobby, because the more chaos and violence there is in the entire Middle East, the better for Israel.

* It would appear that the new documents from Snowden dealing with Israel are part of those deliberately withheld from publication by the Guardian newspaper.