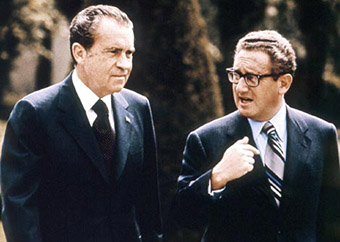 More details of the influence of the Jewish lobby’s power in influencing American foreign policy has emerged with new tapes of President Richard Nixon’s White House conversations, released this week by his presidential library.

The 340 hours of tapes, which cover from April 9, 1973 to July 12, 1973, were released by the Nixon Presidential Library and are the last set of tapes made by recording devices installed at the White House by Nixon.

The one tape shows how, in a phone discussion in mid-April 1973 with Henry Kissinger, a Jew who at the time was the national security adviser, Nixon expresses concerns that Jews would torpedo an upcoming U.S.-Soviet summit.

If that happened, Nixon said, “Let me say, Henry, it’s gonna be the worst thing that happened to Jews in American history.” He added, “If they torpedo this summit — and it might go down for other reasons — I’m gonna put the blame on them, and I’m going to do it publicly at 9 o’clock at night before 80 million people.”

He continued: “They put the Jewish interest above America’s interest, and it’s about goddamn time that the Jew in America realizes he’s an American first and a Jew second.”

Nixon accused the Jews of holding American foreign policy “hostage to Jewish emigration from the Soviet Union,” and added that “the American people are not going to let them destroy our foreign policy — never!”

Nixon was referring to a summit meeting where one of the topics of discussion was a peace solution to the Israeli-Palestinian question which involved Israel giving back land seized during the 1967 war.

The fact that the Jewish lobby could create enough pressure to potentially sabotage an international conference, as Nixon outlined, is more proof of the power of those Jewish Supremacists in determining American policy—even under a president who was aware of their influence.

It is no doubt significant that Nixon made this threat of “naming” the Jewish lobby on national television directly to what he knew to be the leading Jewish Supremacist in his government,. Kissinger.

Nixon knew that Kissinger would relay this message back to his tribe, and they would stop their efforts to sabotage the summit—which was indeed exactly what happened.

* Another tape released this week reveals that Nixon also attempted to reduce the swarm of Jews who made up, even then, senior White House and government officials.

When asked about appointees, Nixon told presidential counselor Anne Armstrong there should be “No Jews. We are adamant when I say no Jews. … But Mexicans are important. Italians, Eastern Europeans. That sort of thing.”