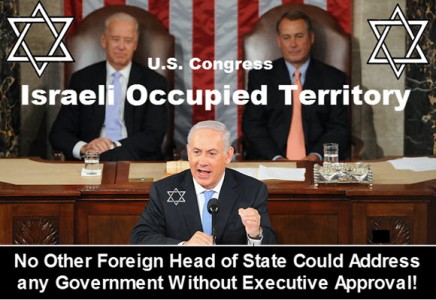 America is supposed to be the world’s only superpower.

But in truth, the real superpower is the Zionist Globalist elite that runs Israel, dominates American politics, finance and media, and thereby controls America and through their power over America, much of the world.

With their control of America’s military and financial might, coupled with domination of much of the world’s media, the Zionist elite can shape actions even in nations that aren’t directly controlled by the Jewish extremists.

Not only does the immense Jewish power in America have the ability to destroy or damage the economy of any nation on Earth, they routinely direct American policies that are catastrophic to America itself.

The most famous journalist in the United States, the Jewish Carl Bernstein, who along with Bob Woodward brought down a President of the United States, shockingly blurted it out clearly on an American TV program, Morning Joe with Joe Scarborough on MSNBC. 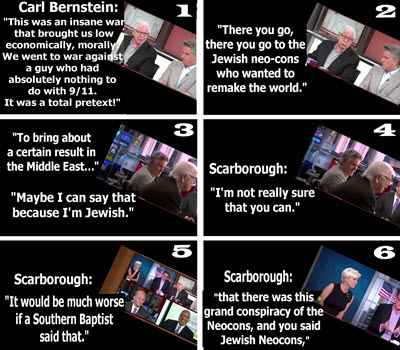 In the show Bernstein talked about the run up to the Iraq War, how the Jewish Neocons dragged America into the Iraq War for the interests of Israel, a war completely based on lies. It must be noted as well that the leading Jewish-dominated media such as the NY Times, Washington Post, as well as their thoroughly dominated broadcast media also uncritically supported the Zionist lies in this war that wasn’t for America, but for the interests of Israel.

It was a war that led to catastrophic loss of innocent life not only in Iraq, but also directly led to hundreds of thousands of Americans with brain injuries, psychological damage, loss of life and limb and cost trillions of American dollars, all to smite an ally of America who was made into an enemy by the Jewish rulers of America because he dared to oppose the Israeli terrorism against the Palestinians and Lebanese.

“This was an insane war that brought us low economically, morally. We went to war against a guy who had absolutely nothing to do with 9/11.

“Maybe I can say that because I’m Jewish.  To bring about a certain result in the Middle East..”

“Maybe I can say that because I am Jewish.

“I’m not really sure that you can. It would be much worse if a Southern Baptist said that. That there was this grand conspiracy of Neocons, and you said Jewish Neocons.”

The unbridled Zionist influence can be seen in the latest speech Netanyahu gives to the U.S. Congress.

There is no other head of state in the world who would attempt to speak to the Congress of the United States or for that matter to any nation’s legislature, without the approval of the President or Prime Minister of that country.

Even when the world’s supposed only superpower President wishes to speak before any legislature, the approval of the executive branch of that nation is secured before any kind of appearance is scheduled.

Not so, when it comes to Israel.

In an embarrassing scenario for President Obama, Jewish power is such that the titular head of world Zionism can do whatever he wants in the chief governmental body of the United States of America!

The controlled media in America and its establishment and controlled opposition, much like that portrayed by George Orwell in his novel 1984, acts as if there is a tussle for power between Netanyahu and Obama, but the truth is that even though it is extremely embarrassing  for Obama, he has neither the clout nor the courage to stop Netanyahu.

As for the Iran controversy, it is simply the good cop, bad cop approach.

The truth is that Israel is the world’s greatest nuclear rogue state. A nation, which has developed horrific biological, chemical and nuclear weapons. Unlike Iran, Israel would not sign the Nuclear Nonproliferation Treaty. Unlike Israel, Iran allows inspections. Unlike Israel, Iran has not invaded any other nation, has not ethnically cleansed, tortured, and imprisoned hundreds of thousands of people.

All one has to do is consider the latest slaughter of 25,000 killed or wounded Palestinians in the latest carnage of Israel to understand who the real terrorist state is in the Mideast!

The truth is that the National Intelligence Estimate, which is compiled by all 16 of the official intelligence organizations of the U.S. Government, including the CIA, National Security Agency (NSA),  Army Military Intelligence, Defense Intelligence Agency, FBI, Office of Naval 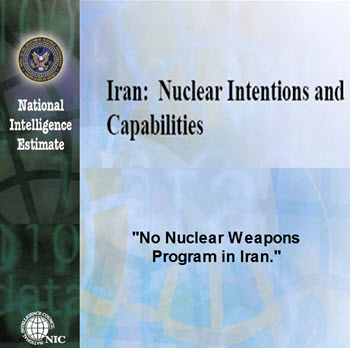 Intelligence and all the rest of U.S. intelligence agencies says that Iran has no nuclear weapons program.

Yes, although Obama is embarrassed he still does not dare to oppose the crimes and terrorism of Israel. He still supports efforts to overthrow and destroy the moderate Syrian government which would only help the ISIS terrorists, all this only because Israel hates Syria, Lebanon and Iran.

The American policy in Syria is proof positive of Zionist power over America, for how else can one understand America’s support of al Qaeda, our supposed worst enemy on earth.  The only force standing in the way of a complete ISIS/al Qaeda takeover of Syria and thus Iraq is the Syrian government of Assad, a government supported by all the Christians of Syria, the secular, moderate Muslims of Syria.

Obama, just like George Bush before him, gives lip service to opposing Jewish theft of Palestinian land in the West Bank and Jerusalem, but in the end continues to send Israel billions of American tax dollars as well as support Israel in the UN from prosecution of its crimes, and putting sanctions on nations that Israel opposes. 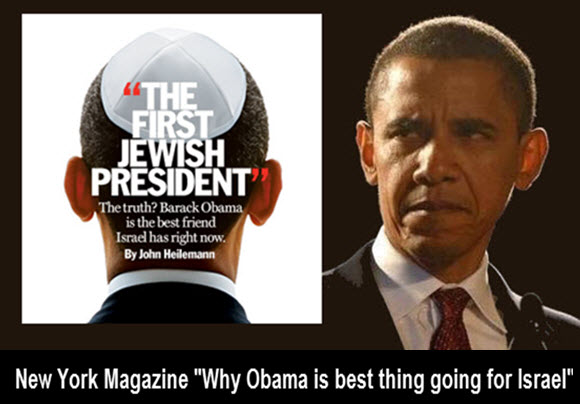 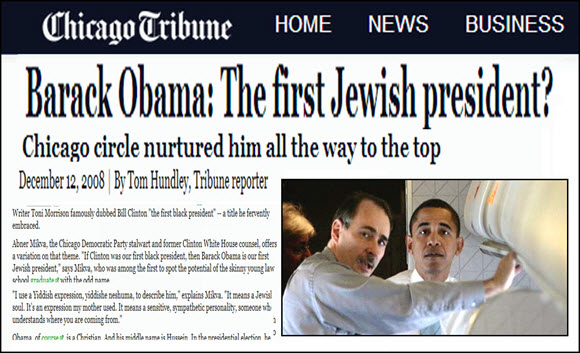 Obama’s chief corporate contributor was the Zionist Goldman Sachs. His long-time handler has been David Axelrod, a famous Zionist hitman of politics. His first chief of Staff was Rahm Emanuel, followed by Jack Lew, who he later appointed to head the Treasury. He appointed Zionist Janet Yellin as FED Chairman and Stanley Fischer an Israeli Citizen who has headed the bank of Israel as Vice-Chairman. 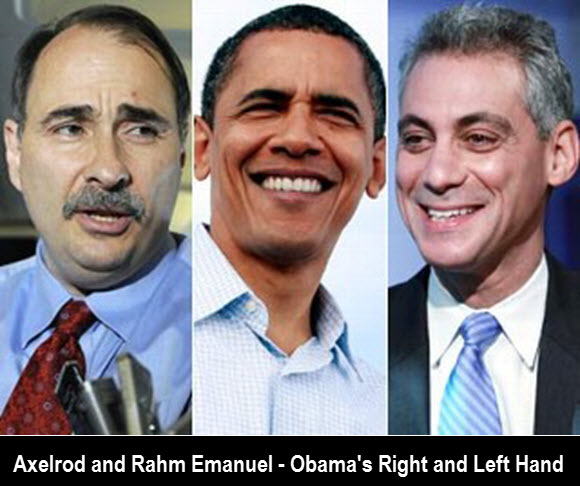 Although the Jewish extremists are all-powerful in government they have slight differences in policy in the same way that the rulers of the Roman Empire might have had different policies toward the nations they ruled over.

The truth is that no nation on Earth would allow the head of state to address its top legislative body without the approval of its Prime Minister or President.

Even the Democratic Party issued a special document showing that Obama is completely subservient to Israel! 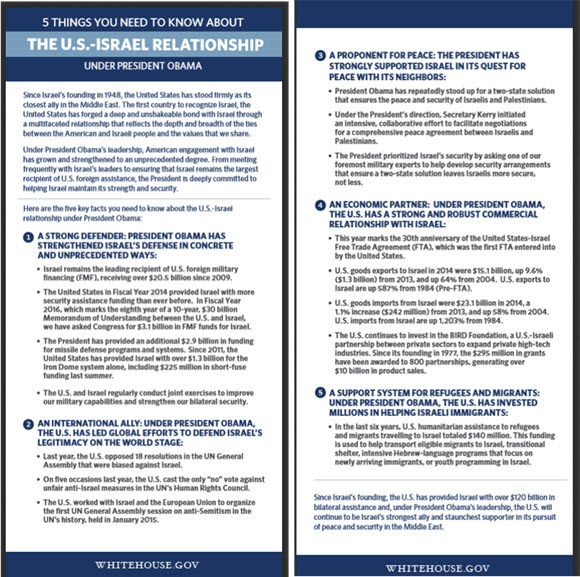 The fact that such is happening in America with Netanyahu’s speech before Congress is not a sign of division or opposition to Zionist power in America, but clear proof of their ultimate  power over America politics.

Watch my video which shows the highlights of the Carl Bernstein interview pointing out the Jewish power in the Iraq war and “Jewish Neocons remaking the world.”

Next Post Dr. Duke explains that Obama is still a Zio-puppet even as he chafes at humiliation by Netanyahu