On today’s show Dr. David Duke discussed the irony and humiliation of having the leader of a country that has repeatedly attacked us march right into our Capitol uninvited by the government and lecture our president and legislators on how they are not being diligent enough in serving the interests of Israel. He commented on how the apparent animosity between Netanyahu and Obama is not evidence that Obama is standing up to Jewish supremacist power, but rather that he is beholden to a faction of Jewish supremacists who feel that Netanyahu’s drive for war on Iran would actually not be “good for the Jews.” 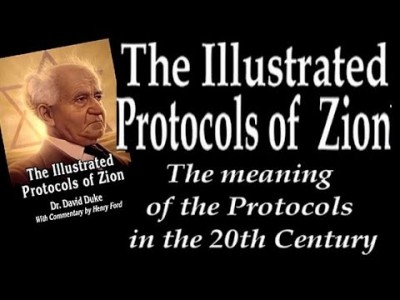 Dr. Slattery joined the show and talked about the importance of Dr. Duke’s forthcoming book “The Illustrated Protocols of Zion.” He said that it’s not just that the protocols weren’t written by this meeting of elders, but that such a meeting of elders did not even need to take place. The strength of the Zionist Conspiracy is that the people involved just tend to know their roll and play it out. Dr. Duke’s book will show not just the accuracy of the predictions made in the 1897 “Protocols,” but also the mechanism by which the Jewish supremacist agenda was implemented and, more importantly, the way to free ourselves from the Zionist yoke.

Zionist power is a Goliath, but like the giant from the biblical account it is not invulnerable. Our very own Dr. David is mounting a promising assault on the Goliath. Please show your support by making a contribution so that we can continue this struggle to ultimate victory.

Dr. Duke also appealed for a listener with a quiet, currently unoccupied vacation home, appartment, or retreat somewhere with internet access to offer it to him for a short period of time so he can concentrate on finishing his forthcoming book, the Illustrated Protocols of Zion. You can contact him here.