By Dr. Patrick Slattery — We are all familiar with the bible story about the giant Goliath, who is defeated in combat by a much smaller opponent armed with a slingshot. There is no doubt that global Zionism is a Goliath. It has incredible power resources. Zionist Jews dominates banking, media, academia, and campaign finance, to say nothing of various other important and lucrative industries and professions. 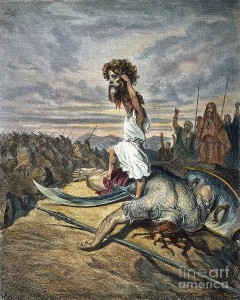 The appalling evidence of Jewish power is all around us. We see it in the lives and fortune spent fighting all those who would oppose Israeli hegemony in the Middle East. We see it in the census data, which shows America as having gone from a country 50 years ago in which almost 90% of the children born were European Americans to one today where a majority of babies born are non- Europeans. We see it in the replacement of a family-friendly culture with one that glorifies obscenity, degeneration, drugs and dissolution.

While Zionist Jewish supremacists have incredible power resources, the one absolutely critical source of their power, the one from which all their other power flows, is their ability to prevent any discussion of Jewish power. But this also makes them incredibly vulnerable.

True, they do allow debates to rage about the implications of Jewish power. You can protest against the wars, you can gripe about immigration, you can organize against pornography, but you cannot talk about the Jewish connection to these problems. You can blame the problems on the bankers, on the 1%, or on globalists. But try putting any of the blame on “Jews” meaning the organized tribal power of Jewish extremists, and your voice will be completely marginalized, if it wasn’t already. This is the key, because once people start talking about Jewish power that power will evaporate.

You might be able to criticize Zionists and get away with it if you are talking strictly about the Middle East and are not a Congressman or a professional media personality. Pointing fingers at “bankers” or “globalists” or “Bilderbergers” will probably not get you in too much trouble. And you are certainly welcome to shout that the world is secretly run by a cabal of Nazis, Queen Elizabeth, or lizard people from the center of the earth. In fact, you can make quite a good living doing so, and the Jewish supremacists will be glad for the distraction and sometimes even foot the bill if the misdirection is effective.

A perfect example is Zionism itself. Fighting Zionism without fighting Jewish tribalism is useless. Why? Because the Zionists completely dominate the organized Jewish community. They control every major Jewish organization, and practically every synagogue on the planet. So, even if a Jew is not a “Zionist” or even if he opposes Israel, if he supports Jewish tribalist racism and privilege, he in effect, enables and empowers Zionism. If “Jews” takeover a media studio for instance because of their tribal cohesion and collusion, it matters not if some of them are Zionists oar not, because Jewish power ultimately is Zionist.

There is a certain amount of value in alerting people to all the problems we face, although these problems can be so obvious that no alarm should really need to be sounded. But at some point it is not enough just to be aware of the problems, because they cannot be remedied if we don’t know what causes of the problems. And that is the point we are at now.

So all we have to do is open our eyes and open our mouths. However, most of even the alternative media personalities will not drop the J-word. They may use poorly understood code words like neocons or globalists. They may point the finger at a group that overlaps with Jewish supremacists but is just as likely to conjure up images of white elites, like capitalists or the 1%. Or they just spout bizarre and unprovable theories about secret governments and conspiracies. None of this identifies the real problem and thus does nothing to overcome the problem.

I know it is hard for people to talk about Jewish power. I get it. If you have a good job, you can lose it if you publicly pronounce the truth about Jewish racism. You can lose access to the media. You can lose friends. You can become ostracized. But overcoming Jewish supremacist power really is as easy as talking about it. And once it gets talked about in public, for all to hear, the spell is broken. The genie can’t be put back in the bottle.

Dr. David Duke has been talking clearly and persuasively about Jewish power for decades. He has developed iron-clad, irrefutable arguments that are accessible to anyone who hears them. However, the Zionist-owned media was long able to make sure that he wasn’t heard.

Things have changed. He has built up his own media outlets, producing books, videos, a radio show, and a website, and he continues to lecture and advise all over the world. He is finally able to bypass the Zio media and reach people across the country and all over the world. And the results are starting to show. Prominent politicians and doctors have been promoting his videos on their own social media. Listenership to his radio program and traffic to his website are rising exponentially. The Zio media is now finding it impossible to ignore him.

He has now reached the point of penetration with hundreds of millions of views of his videos — and over 90 percent positive reception of them, that have had to go to a full-bore demonization mode against him!

However, because he does not have a rich Jewish sponsor providing a comfortable income to him in exchange for toning down his message (as some others do), he needs to ask for your support to make sure he can continue this crucial work.

Imagine yourself at some point in the future, trying to answer your grandchild’s question about how a country as powerful as America, Canada, Australia, UK, France, or a civilization as great as Western Civilization, could degenerate so quickly into an impoverished, conflicted, subservient society. Why it became a society with wars and violence and sickness and degeneracy all around us. Why the European peoples, and by that time probably other peoples as well, cooperated in their own ethnic cleansing, their own suicide, their own genocide. Remember that not only Europeans have been victims of ethnic cleansing, for the Palestinians are an example of Jewish racist supremacism and tryanny as much as any people.

We really are at a critical juncture. We are making so many great strides on the ground with a message that couldn’t be more persuasive. Dr. Duke has devoted a lifetime to doing the research, developing the message, learning how to connect with people, and building the independent media means for spreading the message.  Let’s do our part by supporting his efforts financially so that this message, this enlightenment, this awakening can reach the critical mass of people to change the world into a place where all people and all peoples can be free and independent.

Please show your support by clicking here and making a generous gift to make sure that this crucial information will reach enough of our people before it is too late.

Dr. David Duke is truly America’s and the world’s David who stands up to the Zio Goliath of our time.

He has mine! He needs yours too!

Previous Post Netanyahu’s speech right out of “the Protocols”