The Israeli parliament—the Knesset—widely touted by the Jewish Lobby as the “Middle East’s only democracy,” has just banned one of its members, Arab Palestinian party member Hanin Zoabi from participating in any of its debates!  The ironically named “Knesset Ethics Committee” on Tuesday suspended Balad MK Hanin Zoabi from participating in debates on the Knesset floor for six months, the Israeli-based Times of Israel has proudly reported.

Of course, this banning won’t make the mass media  news services controlled by the Jewish Supremacists which are directed at the Goyim—because it would not fit in with their portrayal of the racist, Jews-only state of Israel as “ democracy.”

Nonetheless, in media which is directed at Jews only, such as the Times of Israel, they are quite open about their activities. 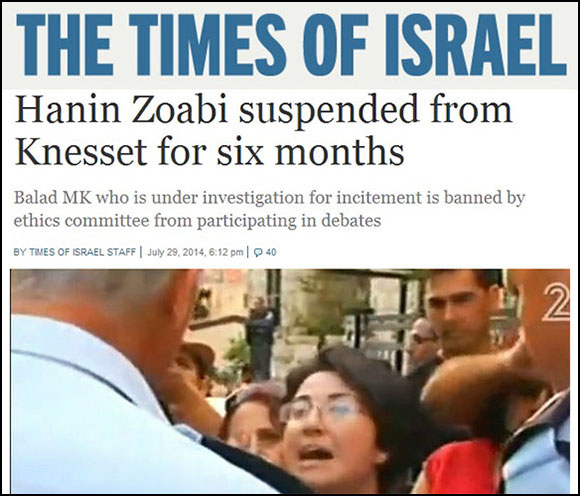 According to that report, the banning is a result of Zoabi, who lives in the Arab city of Nazareth, daring to point out that the alleged killers of three Israeli teens in the occupied West Bank were not “terrorists” belonging to Hamas but merely criminals. Even though this is a perfectly accurate and truthful statement, the truth and Zionist Supremacism are strangers to one another.

As a result, the “Knesset Ethics Committee” has ordered her suspension from debates in the Israeli legislature! Israeli “democracy” no doubt. . .

*Zoabi was also the one of the focusses of the now-popular “song” being sung in Israel by Jewish fanatics, a video of which recently emerged.

Of course, Israel is anything but a democracy. It has violently expelled over three-quarters of a million Palestinians, and continues to commit war crimes, such as the destruction of Gaza’s only power generating plant—which now means that essential services to the besieged region will be nearly impossible.

The damage to the power plant exacerbated the heavy damage to infrastructure in Gaza already inflicted during the 22 days of an Israeli campaign aimed at driving out the last remaining non-Jewish population from the area—all part of the “Middle East’s only democracy”-master plan for expanding the racist state’s borders.

Lies, banning, bombing and murder—this is the true face of Israeli “democracy”, which now, thanks to the Internet, is revealed in all its awful detail for the world to see.

Previous Post The Eleven Lies of Zion: How Zio-Supremacists Lie to Support their Genocide in Gaza

Next Post Dr. Duke Responds to a Letter from a Jew In Israel on Zionist Crimes!