With what the Zio-media boasted was the “heaviest bombardment yet” of Gaza overnight on July 29, 2014, in which more than 100 Palestinians were killed—many women and children—it seems that the Jewish terrorism is forcing even the more usually complaint puppets in the media to admit that something is not quite kosher. 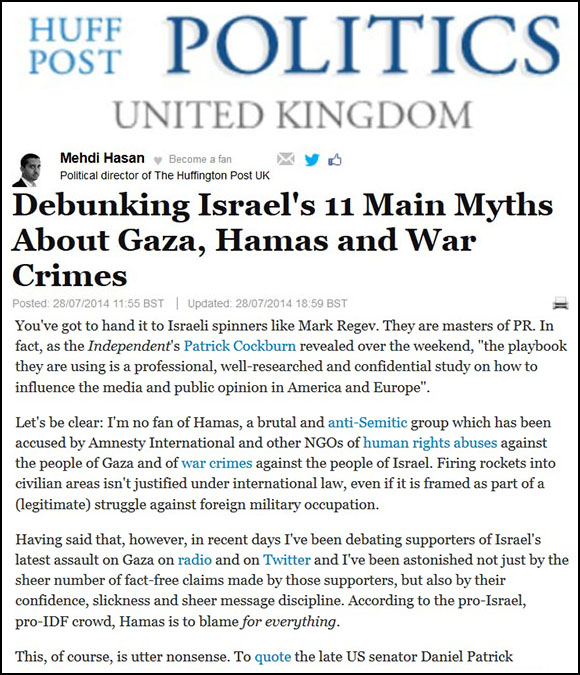 The latest journalist to break ranks isMehdi Hasan, Political director of The Huffington Post UK. In an article titled “Debunking Israel’s 11 Main Myths About Gaza, Hamas and War Crimes,” Hassan has ripped apart the Jewish Supremacist spin about the mass-murder campaign in Gaza, exposing all of the major blatant lies which the Zio-fanatics have told to justify their genocide.

Hasan has, of course, taken what he might think is a precaution to protect his career prospects by starting off by making apologies to the Jewish Supremacist media gatekeepers—in the mistaken belief that they will not hold it against him for telling the truth—but then quickly moves on to a devastating exposé of the Zio-lie machine.

Boston Globe: “Israeli-imposed buffer zones.. now absorb nearly 14 percent of Gaza’s total land and at least 48 percent of total arable land. Similarly, the sea buffer zone covers 85 percent of the maritime area promised to Palestinians in the Oslo Accords, reducing 20 nautical miles to three.” Human Rights Watch: “Israel also continues to control the population registry for residents of the Gaza Strip, years after it withdrew its ground forces and settlements there.” B’Tselem, 2013: “Israel continues to maintain exclusive control of Gaza’s airspace and the territorial waters, just as it has since it occupied the Gaza Strip in 1967.”

Al Jazeera: “Meshaal said Hamas wants the ‘aggression to stop tomorrow, today, or even this minute. But [Israel must] lift the blockade with guarantees and not as a promise for future negotiations’. He added ‘we will not shut the door in the face of any humanitarian ceasefire backed by a real aid programme’.” Jerusalem Post: “One day after an Egyptian-brokered cease-fire accepted by Israel, but rejected by Hamas, fell through, the terrorist organization proposed a 10-year end to hostilities in return for its conditions being met by Israel, Channel 2 reported Wednesday.. Hamas’s conditions were the release of re-arrested Palestinian prisoners who were let go in the Schalit deal, the opening of Gaza-Israel border crossings in order to allow citizens and goods to pass through, and international supervision of the Gazan seaport in place of the current Israeli blockade.” BBC: “Israel’s security cabinet has rejected a week-long Gaza ceasefire proposal put forward by US Secretary of State John Kerry ‘as it stands’.”

The Guardian: “It was there that the second [Israeli] shell hit the beach, those firing apparently adjusting their fire to target the fleeing survivors. As it exploded, journalists standing by the terrace wall shouted: ‘They are only children.'” UN high commissioner for human rights Navi Pillay: “A number of incidents, along with the high number of civilian deaths, belies the [Israeli] claim that all necessary precautions are being taken to protect civilian lives.” United Nations Fact Finding Mission on the Gaza Conflict, 2009: “The tactics used by the Israeli armed forces in the Gaza offensive are consistent with previous practices, most recently during the Lebanon war in 2006. A concept known as the Dahiya doctrine emerged then, involving the application of disproportionate force and the causing of great damage and destruction to civilian property and infrastructure, and suffering to civilian populations. The Mission concludes from a review of the facts on the ground that it.. appears to have been precisely what was put into practice.” 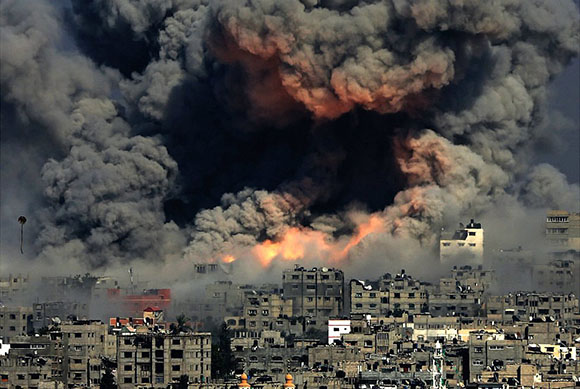 4) Only Hamas is guilty of war crimes, not Israel

Human Rights Watch: “Israeli forces may also have knowingly or recklessly attacked people who were clearly civilians, such as young boys, and civilian structures, including a hospital – laws-of-war violations that are indicative of war crimes.” Amnesty International: “Deliberately attacking a civilian home is a war crime, and the overwhelming scale of destruction of civilian homes, in some cases with entire families inside them, points to a distressing pattern of repeated violations of the laws of war.”

5) Hamas use the civilians of Gaza as ‘human shields’

Jeremy Bowen, BBC Middle East editor: “I saw no evidence during my week in Gaza of Israel’s accusation that Hamas uses Palestinians as human shields.” The Guardian: “In the past week, the Guardian has seen large numbers of people fleeing different neighbourhoods.. and no evidence that Hamas had compelled them to stay.” The Independent: “Some Gazans have admitted that they were afraid of criticizing Hamas, but none have said they had been forced by the organisation to stay in places of danger and become unwilling human-shields.” Reuters, 2013: “A United Nations human rights body accused Israeli forces on Thursday of mistreating Palestinian children, including by torturing those in custody and using others as human shields.”

6) This current Gaza conflict began with Hamas rocket fire on 30 June 2014
Times of Israel: “Hamas operatives were behind a large volley of rockets which slammed into Israel Monday morning, the first time in years the Islamist group has directly challenged the Jewish state, according to Israeli defense officials.. The security sources, who spoke on condition of anonymity, assessed that Hamas had probably launched the barrage in revenge for an Israeli airstrike several hours earlier which killed one person and injured three more.. Hamas hasn’t fired rockets into Israel since Operation Pillar of Defense ended in November 2012.” The Nation: “During ten days of Operation Brother’s Keeper in the West Bank [before the start of the Gaza conflict], Israel arrested approximately 800 Palestinians without charge or trial, killed nine civilians and raided nearly 1,300 residential, commercial and public buildings. Its military operation targeted Hamas members released during the Gilad Shalit prisoner exchange in 2011.”

Jewish Daily Forward: “Hamas hadn’t fired a single rocket since [2012 Gaza conflict], and had largely suppressed fire by smaller jihadi groups. Rocket firings, averaging 240 per month in 2007, dropped to five per month in 2013.” International Crisis Group: “Fewer rockets were fired from Gaza in 2013 than in any year since 2001, and nearly all those that were fired between the November 2012 ceasefire and the current crisis were launched by groups other than Hamas; the Israeli security establishment testified to the aggressive anti-rocket efforts made by the new police force Hamas established specifically for that purpose.. As Israel (and Egypt) rolled back the 2012 understandings – some of which were implemented spottily at best – so too did Hamas roll back its anti rocket efforts.”

Jewish Daily Forward: “The [Israeli] government had known almost from the beginning that the boys were dead. It maintained the fiction that it hoped to find them alive as a pretext to dismantle Hamas’ West Bank operations.. Nor was that the only fib. It was clear from the beginning that the kidnappers weren’t acting on orders from Hamas leadership in Gaza or Damascus. Hamas’ Hebron branch — more a crime family than a clandestine organization — had a history of acting without the leaders’ knowledge, sometimes against their interests.” BBC correspondent Jon Donnison: “Israeli police MickeyRosenfeld tells me men who killed 3 Israeli teens def lone cell, hamas affiliated but not operating under leadership.. Seems to contradict the line from Netanyahu government.”

9) Hamas rule, not Israel’s blockade, is to blame for the humanitarian crisis in the Gaza Strip

10) The Israeli government, unlike Hamas, wants a two-state solution

Times of Israel: “[Netanyahu] made explicitly clear that he could never, ever, countenance a fully sovereign Palestinian state in the West Bank.. Amid the current conflict, he elaborated, ‘I think the Israeli people understand now what I always say: that there cannot be a situation, under any agreement, in which we relinquish security control of the territory west of the River Jordan.'”

11) All serious analysts agree it was Hamas, and not Israel, that started this current conflict

Nathan Thrall, senior Mid East analyst at the International Crisis Group, writing in the New York Times: “The current escalation in Gaza is a direct result of the choice by Israel and the West to obstruct the implementation of the April 2014 Palestinian reconciliation agreement.” Henry Siegman, former national director, American Jewish Congress, writing for Politico: “Israel’s assault on Gaza.. was not triggered by Hamas’ rockets directed at Israel but by Israel’s determination to bring down the Palestinian unity government that was formed in early June, even though that government was committed to honoring all of the conditions imposed by the international community for recognition of its legitimacy.”

We can hope for Hasan’s sake that the Zio-media controllers will forgive him for this lapse into truthful journalism—but we doubt it.

Next Post The “Middle East’s Only Democracy” Bans Arab Knesset Member from Participating in Debates!