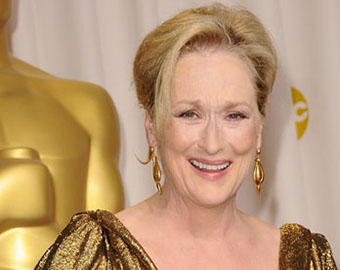 By Dr. Patrick Slattery — Meryl Streep has been one of Hollywood’s most successful actresses over the past several decades, and she has just showed her Zio-studio masters her appreciation by slamming the “anti-semitism” of the one major gentile producer who managed to overcome the intense ethnic networking and anti-goyim discrimination of the Jews who run Hollywood.

According to Britain’s Guardian Newspaper, “While honouring Emma Thompson at a dinner for the National Board of Review on Tuesday night, Meryl Streep made an extraordinary speech that criticized Walt Disney for being a ‘gender bigot’ who was a member of an antisemitic lobbying organisation.” (Click here for the full article.)

Emma Thompson is a British actress who starred in a new film about Walt Disney called “Saving Mr. Banks.” Ironically, Emma Thompson is well-known for her work in the Palestinian solidarity movement.

Hollywood, which produces countless films year after year about evil German Nazis and sympathetic Jewish Holocaust victims and survivors, never seems to have time or money for movies about Palestinians, unless it is to portray them as terrorists victimizing poor Israelis.

I wouldn’t wait for them to make a film about the victims of the Palestinian Nakba. And of course they cannot make a film about Nakba survivors as no one has survived the on-going Nakba, a catastrophe that has lasted ten times as long as the Holocaust.

Getting back to Meryl Streep, her accusations about membership in an antisemitic lobbying organization refer to Disney’s involvement with the anti-communist Motion Picture Alliance for the Preservation of American Ideals.

However, according to Disney biographer Neal Gabler, who is best know to David Duke Show listeners as the Jewish author of the book about the Jewish takeover of Hollywood titled An Empire of Their Own, “Walt himself, in my estimation, was not anti-Semitic.”

Streep thus joins a long list of gentile celebrities from Seth McFarline to Glenn Beck who have declared their servitude to Jewish paymaster by lashing out as the ever-present danger of anti-Semites all around us.

* The Disney Corporation of today is, of course, not the original Disney company which Walt Disney created. Walt Disney was hated by Jewish Supremacist-controlled Hollywood because he was a highly successful non-Jew in the movie industry, and because he was a founding member of the anti-communist group  called the “Motion Picture Alliance for the Preservation of American Ideals” during the Second World War, and in 1947 testified before the House Un-American Activities Committee (HUAC), where he branded Jewish Supremacists such as Herbert Sorrell and David Hilberman as Communist agitators.

Disney also accused the Screen Cartoonists Guild of being a Communist front, and charged that a 1941 strike was part of an organized Communist effort to gain influence in Hollywood. Although Disney never spoke publicly about Jewish Supremacists, the targets of his testimony before the HUAC were mostly Jewish–and for this, the organized Jewish Supremacist organizations never forgave him.

The Disney Company was eventually taken over by Jewish businessmen and is today nothing but another front for propagating Jewish Supremacist propaganda.